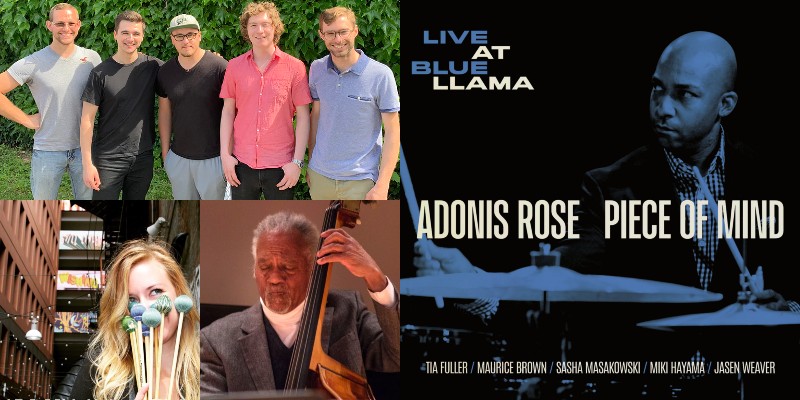 Danielle Gonzalez, live at Drip House in Ann Arbor, October 2, 2020
I saw a clip of Ann Arbor percussionist–vibraphonist Danielle Gonzalez performing October 3 outside Ziggy's in Ypsilanti where she basically plays the alleyway with her drumsticks. Her performance the day before at the new A2 coffee place Drip House focuses on her vibes skills. Check out Gonzalez's YouTube channel for more live performances and her videocast.

Beartrap, live art the Detroit Jazz Festival, September 6, 2020
While this band claims the Detroit area as its home, multi-reedist Tristan Cappel is a semi-recent graduate of U-M's music school (and a more recent transplant to New York City). Beartrap has released two excellent albums, both of which draw on Ornette Coleman's inside-out legacy while adding contemporary music influences, from electronica to metal.

Various sets at Blue LLama Jazz Club
For the past six months, Blue LLama Jazz Club has been keeping local musicians employed with a steady stream of gigs even when it couldn't open its doors or patio to customers. Those performances have been livestreamed and saved on Blue LLama's YouTube page, which has created a real-time repository of performances by area jazz artists. Below is a small selection of sets by local musicians that you can see over at the YouTube page, along with the opening track of New Orleans jazz drummer Adonis Rose's new album, Piece of Mind: Live at Blue LLama, which was recorded in May/June 2019 and came out on September 2020 on the Danish label Storyville Records, which has been releasing music since 1952.