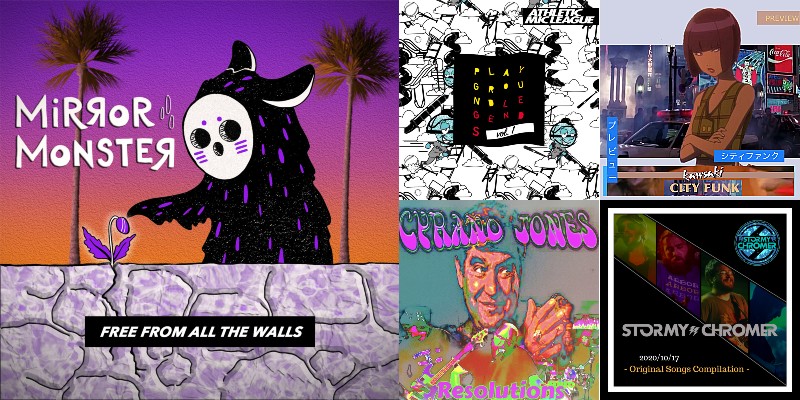 Athletic Mic League, Playground Legends, Volume 1 EP
We highlighted a few tracks from this seven-song release by the reconvened Ann Arbor hip-hop collective when we interviewed Athletic Mic League in September, but now you can hear the whole thing. The group tacked on "Volume 1" to Playground Legends most likely because the rappers and producers recently regrouped once again for another session—and according to this Instagram photo, it's the first time all seven members have been in the same room in 10 years.

Mirror Monster, Free From All the Walls EP
The debut EP by Ann Arbor's Mirror Monster offers upbeat electronica, with the lead track featuring local vocalist Ki5 navigating the space between a synth-pop brooder and a dance-floor anthem.

Kawsaki, City Funk [Preview EP] and "Metro City Breakers"
I stumbled across this September EP by Ann Arbor/Detroit electro-funk project Kawsaki on Bandcamp, but when I clicked through to Soundcloud, I found an even newer track: "Metro City Breakers" came out October 29. Then I stumbled across a whole other Bandcamp with even more releases by this mysterious one-man band.

Cyrano Jones, Resolutions and Live at Fuzz Fest 6, June 22nd 2019
Ann Arbor's Cyrano Jones recall the era when 1960s beat groups because 1960s psych-rock bands. Resolutions is an eight-track studio collection from September, including a cover of The Hollies' "Bus Stop," and you can hear live renditions of several of those tunes by a few others on the new Live at Fuzz Fest release.

Stormy Chromer, Bidding War Playlist
This popular Ypsi-based jam band has been uploading a ton of high-quality live shows to its Bandcamp page during the pandemic, but Bidding War Playlist is a handy 34-track compilation of the quartet's original songs.