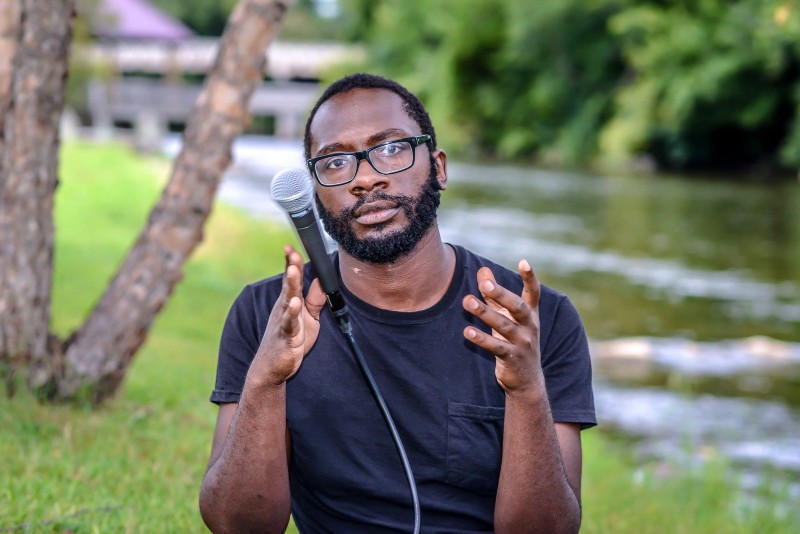 Q: Tell us a bit about yourself.
A: I grew up in Ann Arbor in a musical family. All of my siblings played instruments growing up and I asked for violin lessons once I noticed I was the only one who didn't have them yet, but I was quite young. They start Suzuki music students off with a Cracker Jack box violin when they're that young. That's where it all started.

My love for music developed in high school, when I moved beyond being involved in orchestra—now as a violist—and started doing extracurricular a cappella groups. Singing in a couple of men's groups of about 10 people helped put skills of harmonizing I'd naturally picked up from violin to good use and I got more fulfillment out of using my voice rather than playing something that expressed sounds.

Q: How do you write your songs?
A: I write songs so many different ways. I often use piano to get ideas by repeating basslines and singing different things over them so it feels like when there are instruments involved. I'm a melody-before-lyrics person. Otherwise, I like recording voice memos and emailing myself lyrics so I'll have access to them.

I'll give some examples of how songs of mine released in the last year were written.

For "Ghost," a popular tune from my EP Looking for the Sun, I wrote a guitar part inspired by a Foy Vance tune I loved and I experimented with singing many lyrics over it until I found some that intrigued me. The lines that I built the song around were "What's the year? / What's my name" and "Please be close / Please be near." I transposed the guitar part to vocals and "Voila!"

For "Sunny Days," I was driving in my car late in winter after having listened to an inspirational podcast on creativity. First, I thought, "I need more sunny days," and I sang to myself, "Sunny days, sunny days ... Oooo Ee, Oooo Ay" and then thought, "Hm, that could be something."

Q: What's your gear setup?
A: I use a BOSS RC-505 Loop Station that allows me to record on five independent tracks. I stack vocals and/or percussion on each track and then get to play with having anywhere from one to all five tracks playing at the same time. Listening to the different sounds added together is great fun.

The second piece of gear you'll often see with me is a BOSS VE-2 that's a vocal harmonizer. I mainly use it as a way to quickly increase my vocal presence. With so many vocal layers, it's important to be able to separate the main event from the background.

Q: You went to MSU and sang with State of Fifths. How did working with a top-level university a capella group help develop you as an artist or your understanding of harmony, melody, arrangements, etc.?
A: Firstly, I learned by being in a co-ed group. As an arranger, it was like, "Oh, now let's paint with twice as many colors!" so that was enriching to explore working with higher voices. I had an amazing time playing with the harmonies possible with such a wide range as a group.

We sang many cover songs as I still enjoy doing. The melodies were there for us to sing, but we had to really feel it and embody the messages of the songs or they would fall flat performance-wise. I like to think I dig for the message of each song while performing still, cover or otherwise.

Blending, balancing, and creating vocal textures are skills developed by working with State of Fifths that are essential to what Ki5 brings to the table. Some of my early songs—and probably some recently—added more layers than necessary to reconstruct the feeling of wholeness I got from standing in the middle of an a cappella group and listening to waves of sound crashing all around.

I also was gifted exposure to frequent beatboxing, experience holding my own part in the middle of a complex sonic landscape, and chances to sing in front of many crowds. There's no Ki5 without State of Fifths.

Q: You mention Reggie Watts on your Bandcamp page as an influence, but I hear more Ladysmith Black Mambazo, Bobby McFerrin, American gospel traditions, Boyz II Men. Almost like you're working to re-create an a capella group sound on your own whereas Watts goes into outer space and has more of a one-man jam-band feel.
A: That's a great point/ Since I was an "a cappella kid" throughout college, I naturally absorbed the energy of those wonderful artists you mentioned, but I need something more to bridge the gap to becoming a live looper. I witnessed the freedom that Reggie Watts brought to the table while doing all the parts he wanted—sometimes in outer space. I had believed I could only notably function as part of a group and Reggie showed me another way along with other live loopers. I was then able to marry the freedom of expression, to the lessons I learned with State of Fifths and before.

Q: What is your 5 Day Song Challenge?
A: My 5 Day Song Challenge is one way I leverage extrinsic motivation to get things done. It's helpful to streamline my focus for a bit on a particular project. I got the bulk of the recording and mixing done for "Show Me Freedom"—released end of September—by giving this challenge to myself. I'm about due for another one actually.

My hope is to invite others to commit to five days of something they have trouble scheduling. I think it's amazing to carve out chunks of time to be creative and I'd recommend that for every person.

Q: You mentioned working on a new song that is in more of a pop vein than your other Ki5 work. Tell us about how it came to be and when it will be released.
A: My new song is a collaboration with my friends Abigail Cline and Joseph Wylie. After Abigail and I met through a songwriting course, we decided to write something for the purposes of getting sync licenses used in ads/tv/film. She lives in Chicago and after a few remote sessions, we created a demo and I asked my State of Fifths groupmate Joseph Wylie to sing on. Personally, I think it'd make an awesome trailer for a kids movie having something to do with adventure or space.

I provide many background vocals with Abigail and I get to produce with instruments professionally which is a fresh challenge that has been exciting to face. I think the earliest it'll come out is December. Stay tuned for the official release date.