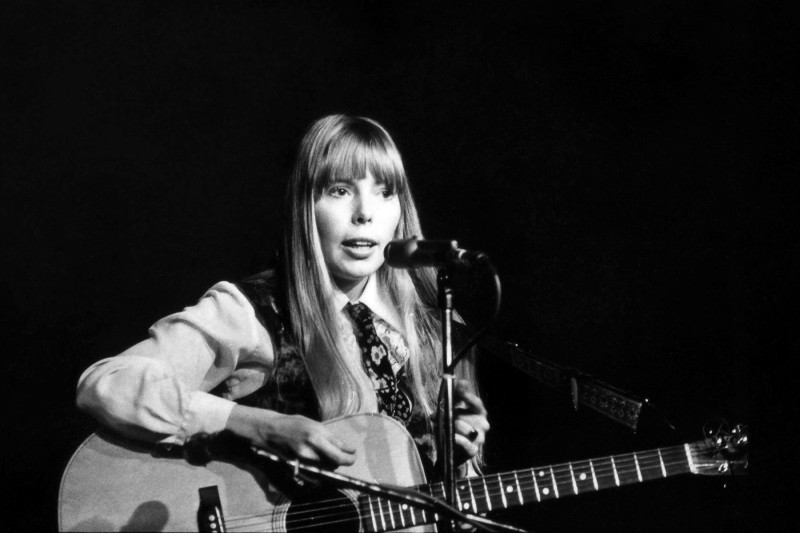 The set begins with the song "Conversation," but it's the intro to the second song, "Come to the Sunshine," that helps contextualize Mitchell's Ann Arbor appearance:

I've been wanting to play here for a long time and on my opening night I got lost in the place where I was staying, in corridors of the Union [laughs and tunes guitar]. This is a song I wrote not too far away from here in Detroit. It's a song about sunshine and morning and love and rainbows, and I've written two on the same theme. One of them was written in a quiet neighborhood and it goes like this.

Mitchell moved to Detroit around April 1965 and married the folk singer Chuck Mitchell that June. They lived in the Cass Corridor's Verona Apartments for a couple of years, but by the time of this Canturbury show, she had moved to New York City. While living in Detroit, Mitchell often spent a week or two at a time performing at places such as at The Chess Mate and The Living End, plus other stray dates in the city and around the state, including Traverse City, Flint, Saginaw, and Port Huron.

"Come to the Sunshine" was likely written in the first half of 1966 since Mitchell was shown lip-synching to it on Canadian TV in August of that year and the tune has an August 22, 1966, copyright. The sweet song is simple, both musically and lyrically, and it never appeared on her studio albums, though it remained in her live sets at least through early 1968.

She follows "Sunshine" with "Chelsea Morning," written the month before her Canterbury show, and it contrasts the locations of where the two songs were written:

This is a song on the same theme—still morning and love and sun and rainbows, only now I've moved the stained-glass windows, which make the rainbows, which I suppose cause the love. I've moved them to a noisier place than Detroit. And there the sit in New York, in a window that has that much sun in it in the morning, up in the corner right above the gold saint statute and the boys military academy, which is why I put the stained-glass windows there in the first place. Then it comes out a little noisier as "Chelsea Morning."

Mitchell's song introductions are charming throughout the evening, and the lilt and cadence in her voice make her sound something like Wizard of Oz-era Judy Garland. While the above quotes are the only references Mitchell makes to Michigan, some of the other intros are worth exploring.

After requesting "a glass of water or a Coke," Mitchell breaks her G string while tuning up for "The Dowie Dens of Yarrow," a 19th-century Scottish ballad and the only non-original song in her sets that evening. You can hear the string snap and the audience moan "ooohhhh," but a nonplussed Mitchell immediately asks, "Listen, if somebody can change my string—there's another one in my case—and I'll sing one unaccompanied until they get back," which she does.

She says that "Free Darling" is something of a response to Frank Zappa's band The Mothers of Invention because "they always say, 'That's all right, darling' or 'That's all right, baby,' which is sort of an attempt to revise 1957 rock 'n' roll." I'm not a Zappa-head, so I'm not sure which Mothers of Invention song(s) she's referring to; I can't find any use of "darling" in the band's songs until two albums that didn't come out until 1968: We're Only in It for the Money and the doo-wop pastiche Cruising with Ruben & the Jets, though it's possible she had heard the band performing these tunes live or had early access to Money, which was recorded in 1967. The audience doesn't seem to know what she's talking about, either, though they laugh at her "1957 rock 'n' roll" line.

Mitchell finished her first set of the evening by introducing "Cactus Tree" as "Cactus Flower," and it's no surprise Mitchell hadn't settled on the final title yet: She only wrote the song 15 days before the Canturbury performance. She then adds a winding tale about not being influenced by Dylan because:

I could never quite understand a lot of things about him. Everything that I knew and all the information I had on him seemed contradictory somehow. But last week in New York, I went to see his movie Don't Look Back, and it all made sense. I found out that David Blue was, was ... see, David Blue sort of is a Dylan imitator and he won't admit it—don't ever say I said that—and so is Eric Andersen, but they're entirely different people. Well, I found out that Eric Andersen is Dylan's sense of humor—sort of a giggly, gangly sense of humor. And David is sort of his philosophical, grouchy side. So, if you put David Blue and Eric Andersen together, if you've known them for a while, suddenly there's this person on the screen, and it's just like a tennis match between Eric and David. And I truly found understanding, in honor of Mr. Dylan I've lengthened all my A's in this next song.

It sounds like she's saying Dylan swiped the personalities of Blue and Andersen rather than them being supposed imitators? She gave a similar introduction to the song five days prior in Philiadelphia. It's revealing that Mitchell was already feeling some sort of irritation with Dylan, and even though she later worked with him, including being a part of the legendary Rolling Thunder Revue tour, she seems to feel deep down in her bones that he's phony. In a salty 2010 interview with the Los Angeles Times, Mitchell said, "Everything about Bob is a deception," among a few other slams. A few days later she somewhat tried to clarify her comments about Dylan in an interview with the CBC, but instead she added to her long-standing idea that Dylan is more of an actor and chameleon than a true musical artist: "He's invented a character to deliver his songs." Also, Mitchell's1977 song "Talk to Me" is directed at Dylan, poking fun at "Mr. Mystery" and offering this couplet about her loose tongue and his brooding silence: "I pay a high price for my open talking / Like you do for your silent mystery."

After Mitchell introduces the penultimate song of the Canterbury evening as "From Both Sides Now," you'd expect raucous applause and a whoop of recognition from the audience for one of her most beloved tunes, but there's an almost jarring silence. That's because the song was unknown: Mitchell had only written it in early March of that year and it didn't appear on record until 1969's Clouds—and by then, the "From" had been dropped from the title. ("Both Sides Now" was also sometimes called "Clouds," so the album title is a nod to that.)

While Mitchell was still building her career in 1967, she's was known enough for The Michigan Daily to send a reviewer to the concert. In his write-up—headlined with zero enthusiasm as "Coherent Acoustical Pop"—you can tell Robert Franke is smitten with Mitchell and the show, ending his piece by writing, "The thing that kills me is that nobody reading this will believe it. I can see that, I understand. But you haven't been through it, my friend. You have not been through it."

With the help of Live at Canterbury House - 1967, you can at least imagine being there. Franke even got to write the liner notes.