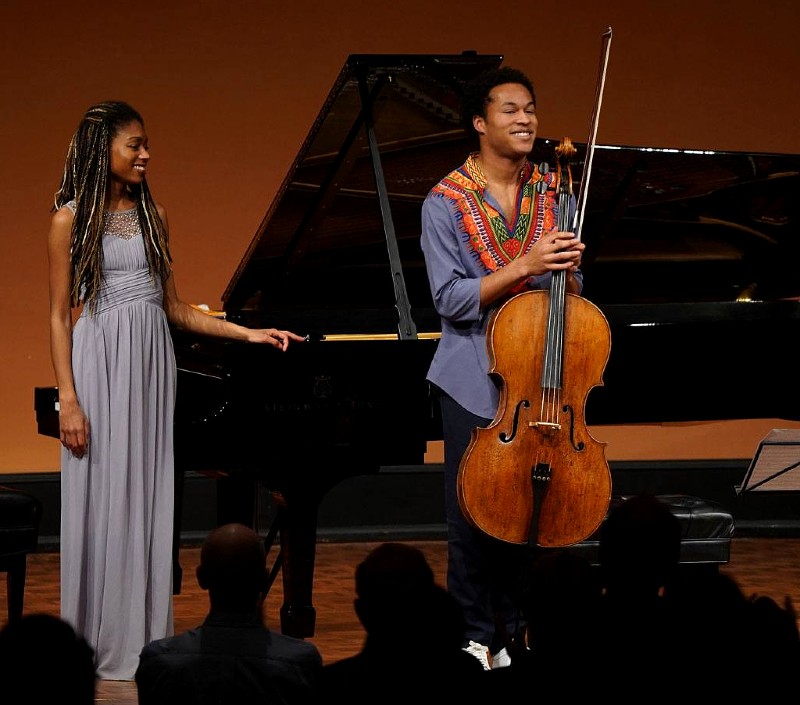 The concert consisted of two pieces: Beethoven’s Sonata No. 4 in C major, Op. 102, No. 1 and Rachmaninoff’s Sonata for Cello and Piano in G minor, Op. 19. They also encored with "XIII Le cygne (The Swan)" from Camille Saint-Saëns' The Carnival of the Animals, which can be found on The Kanneh-Masons' family album.

The extroverted Sheku plays with a deep passion that's expressed all over his face and demeanor. In contrast, Isata plays with more reserve, offering controlled tenderness and sweetness.

The Sonata No. 4 in C major, Op. 102, No. 1 starts off andante, a slower walking pace, and then abruptly changes into a speedy allegro. Isata’s fingers quickly but gracefully flew across the piano keys during the allegro section, but the siblings were in perfect sync throughout both movements.

By playing only the first part of the Beethoven sonata, the duo was able to save some energy to tackle the entirety of Rachmaninoff’s Sonata for Cello and Piano in G minor, Op. 19, which runs about 35 minutes with no breaks.

Rachmaninoff’s sonata features heavy, thick chords and wide octaves on the piano score, and these motifs are echoed and expanded upon by the cello. It requires intense coordination from both musicians and Sheku and Isata were up for the challenge. Throughout the performance, the camera switched back and forth between both artists, allowing you to observe them up close.

The final section of the Rachmaninoff, the Allegro Mosso, was a personal favorite. This piece requires quick movement with agile staccato notes appearing abruptly after a slower more mellow movement. It requires exceeding precision and the siblings pulled it off perfectly. This piece leaves no room for boredom; just when it appears to be relaxing, it quickly picks up momentum.

The encore was a piece some might not recognize by name, but Saint-Saëns' "XIII Le cygne (The Swan)" is a staple of cello-piano duets and the most popular section of The Carnival of the Animals. It’s short enough for an encore and familiar enough to leave audiences feeling refreshed and wanting more.

Despite not being able to perform in front of an in-person audience, the Kanneh-Masons still delivered an intimate and captivating performance. During these uncertain times, sometimes that’s all we need.