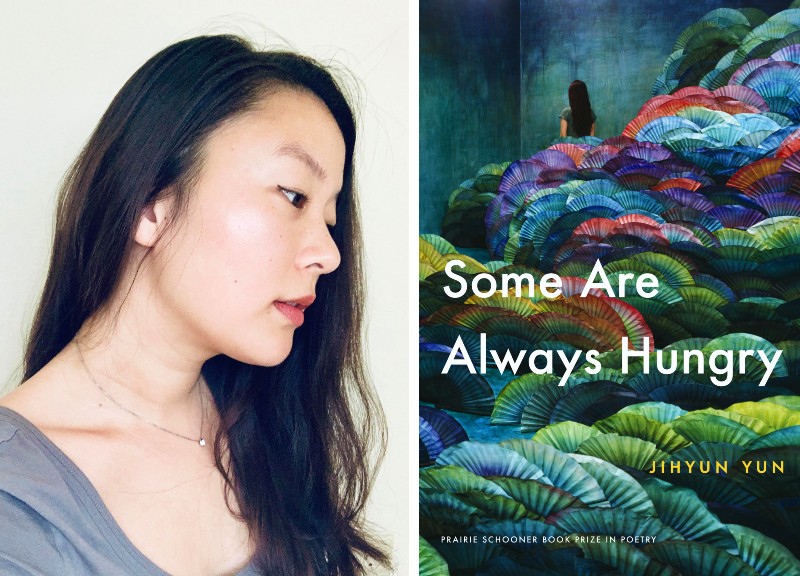 Some Are Always Hungry by Jihyun Yun concentrates not only on cuisine but also on the ways the world views, consumes, and treats womanhood—how women are made to push through and past very physical, personal challenges, and to try again. The attention to these topics is inseparable from history, trauma, and family, whether it’s on memories of immigration, the shame carried in female bodies, or the comfort of a meal made from bodies of animals.

These poems tie together generational and physical pain, recipes, and urges—the urges to survive, to procreate, to eat, to seek fullness. They read in the way that you may listen to someone talking with the leaps between thoughts that are colored in by context and word choice. One poem looks back on a moment:

…. I’ll be twenty-three,
I’ll finally understand all he did to me

on that blue bed. Gondolas
rocking to driftwood in my dreams.
The hurt he said I was born to eat.
My, Stop. And then my, Yes.
I bleed like girls are taught to bleed,
pretending I am fine.

The excavation of the past and women’s experience also mixes with images of animals wrecked for consumption, and we read about the three generations of women—grandmother, mother, and daughter—sharing a chicken thigh:

Enough, Mother says, and Grandma
finally picks up the thing. She dismantles it
like a lover. Divesting it of skin, parting
the twinned bones, the flesh in tatters.
She leaves nothing: the cartilage
that cradles, the muscle, the jut of tendon,
she takes that, too.

Yun asserts both the lived female experience and the legitimacy of ways of eating and being through the parallels between how women’s bodies are treated and how animals are butchered for food.

Yun lives in Ann Arbor and is from California. She is a Korean-American poet, educator, and Fulbright Research Fellow. Some Are Always Hungry is her debut collection, and it won the Prairie Schooner Book Prize. I caught up with Yun by email to ask about her new book and discuss life in the Midwest, her poetry, what’s new to read right now, and what’s next for her.

Q: You are from California, went to school in New York, and now live in Ann Arbor. What brought you to the Midwest? What’s different here, and what do you like?
A: I moved to Ann Arbor to be with my partner who was starting a history PhD program at the University of Michigan. Before moving here in 2018, I’d never been to the Midwest, so I wasn’t sure what to expect, but I’ve been really enjoying living here. Having grown up in California, I am always in awe of getting to experience all four seasons. I don’t know if it’s because I now get to watch the seasons physically turn the page, I’ve gotten a lot more into seasonal activities: cider mills in autumn, a trip to Frankenmuth in the winter. I also love living close to the university and having easy access to the great author talks and events that come through town.

Q: What drew you to poetry and writing poetry?
A: I’ve been casually interested in creative writing since high school where I used to dabble in short stories. With fiction though, I often felt a little locked out by prose’s more rigid grammatical rules (I know that lots of contemporary fiction subverts grammatical mores, but at the time I hadn’t encountered that yet). Though English is my primary tongue, until I entered kindergarten, I spoke only Korean. I’m not sure if the short time straddling two languages and being truly fluent in neither is to blame, but I have always struggled immensely with English grammar. In high school, when I would turn in my prose pieces, the feedback would be so hung up on syntax rather than content that I became a little discouraged from writing fiction.

I first came to poetry in university during an introductory level workshop. I’d never written or even really read much contemporary poetry at the time. The first poem we were assigned was “Persimmons” by Li-Young Lee, and it completely upended all of my expectations for the genre, which I had secretly been expecting to all read like Western canon. The poem dances at the intersection of two languages, meditates on the loss of one tongue for another. It all really resonated with me, and the more contemporary poetry I read, the more I was drawn to the genre’s subversion of what I thought were hard grammatical rules. It’s what keeps me excited about writing and reading poetry: the permission to rupture syntax on the page and celebrate that rupture.

Q: Reading your new collection, Some Are Always Hungry, feels like there are many influences on these poems. Did you say to yourself that you want to talk about Korean history, food, family, women, and bodies all together, or did they come together organically? Tell us how you went about writing and organizing this book.
A: I honestly didn’t write with any plan for a cohesive manuscript. The completion of even one poem often feels daunting to me, and trying to think of anything in the context of a fully formed project tends to bring out my most self-sabotaging tendencies. Because of this, I like to take a myopic approach with writing: one poem at a time, no grand goals. It wasn’t until I had a stack of about eighty poems that I realized I had something that can potentially become a book. After that, it was a matter of whittling down, seeing which poems negotiated the same topics in similar ways and cutting the weaker one; seeing which threads organically came together. I find this part of the writing process to be the most fun—it’s like excavation. There is so much to discover about your own work in hindsight.

During the editing down process, it became obvious that the book’s primary obsession was women and the way history is transmitted via food. It wasn’t an intentional motif. It organically came together because of my lived experience. My most significant influences are my mother and grandmother, and most of our most tender memories revolve around the preparation of food. In retrospect, the inherent warmth of writing about food really saved the collection from being completely desolate.

Q: In the first poem, “All Female,” we learn, “It’s always the girls. For everything. / When was the last time you’ve heard / of rooster soup?” Later on, poems with titles like “The Daughter Transmorphic,” “Mother Undresses,” “Husband Stitch,” and “Menstruation Triptych,” among others, openly discuss expectations around females and their bodies. Was it hard to write these poems and/or share them with people?
A: Yes, it was immensely difficult to write these poems, and continues to be difficult to know people are reading them now. In a way, I feel very unhusked, but I also think getting them down on the page and into the world was pivotal in me coming to an understanding with my own history of trauma and the trauma enacted upon women at large. In all honesty, though, I still have not really shared these poems with my family. My grandmother and mother aren’t fluent in English, and when they ask me for rough translations of poems in my book, I dance around certain poems (“Caught,” “Lilith,” “Mother Undresses,” “Blood Type,” etc.) and will likely continue to do so. I believe it’s important for writers to honor their own hearts by refusing to share certain works with loved ones, even if it happens to include them.

Q: This collection addresses historical trauma as well as challenges around immigration. The poem “Immigration” includes a mother with the description that:

At sixteen, she’s still new to this nation that unnames her daily.
An Oriental name will drag her, they say, so she gives up Sunju for Kathy,
Though the tongue-tip press of -th- refuses her.

She’ll say Katt-ie for years, and sets even her teachers snickering,
the dignity of a name only the first of things taken.

This slight on something so personal as a name raises questions on what else was taken. With the book’s dedication stating, “For my mother & her mother & hers,” do you consider any of this book to be autobiographical? Does the speaker blur with you in some of the poems?

A: While of course in general it is important to not conflate speaker with writer, my book is fairly autobiographical, and the speaker is often versions of myself or my family members. Most of the poems have to do with passed-down stories or real personal events. I do take some pains to fictionalize in certain ways though, drawing in fairytales and such to provide a comfortable buffer between myself and the speaker.

Q: Let’s talk about the recipe poems, too. They describe how to make something with observations about ingredients and personal history mixed in with the steps. And “Reversal,” which is a sort of un-recipe, may be my favorite. How did you choose specific recipes to write into poems? What inspired you to blend the forms?
A: The dishes I decided to write about were either dishes that have specific sentimental value to me (fish head soup, crab stew) or dishes with interesting historical subtext. For example, my poem “War Soup” was written about a dish called Buddae Jigae (Army base stew). It’s a very popular and trendy dish now that can be found at a lot of Korean eateries and pubs, but it was first created out of necessity during the Korean war. In my poem “Savaging,” I write about the prototype version of the dish which was made from food and garbage scrounged from U.S. Army bases. My grandmother recalls even putting in spit-out gum from the soldiers to fortify the soup. The dish is the very embodiment of cuisine as historical mouthpiece. Blending the two mediums felt like the most natural way to convey food’s full storytelling capacity.

Q: What’s on your nightstand to read these days?
A: I am about 30 books behind in my TBR, but next on my list are Arrow by Sumita Chakraborty, Negotiations by Destiny O. Birdsong, and Horsepower by Joy Priest. I also have the His Dark Materials trilogy on my Kindle for something a little different.

Q: We are many months into a global pandemic, among other things going on, and life is somehow persisting. Given all of that, what are you working on next?
A: I am being gentle with myself to not push myself to produce given how fraught this year has been, but I am currently working on a YA contemporary retelling of a Korean folktale and ghost story (actually, there is a poem in Some Are Always Hungry based off of it as well, “The Tale of Janghwa and Hongryeon”). It is currently only early in the drafting phases, and as of now, I’m not writing it with any aspirations to query it or attempt publication. It’s mostly a project so I can dip my toes into fiction again. It’s been a lot of fun to write outside my comfort zone.