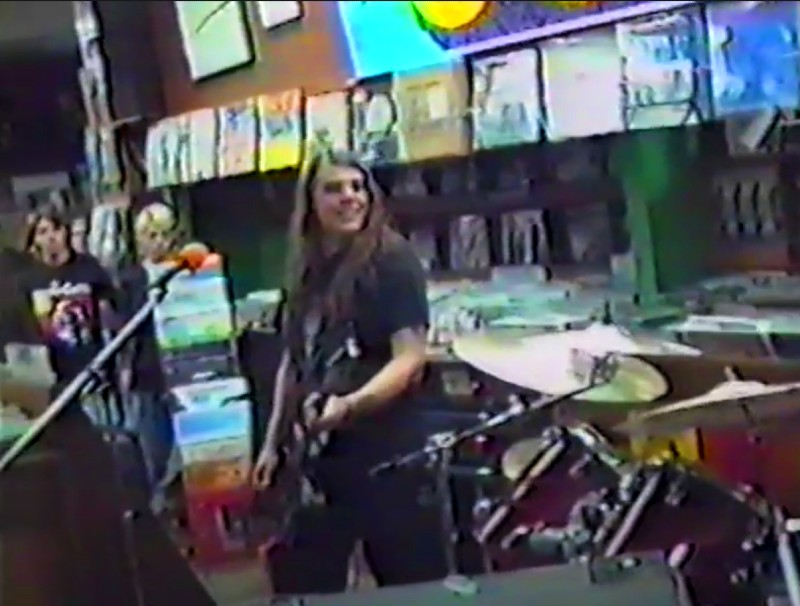 On Repulsion's lone album, Horrified, the Flint-based grind-metal pioneers' sound is a muffled blur of blast beats, gnarly guitar, and grunted vocals. Same is true of the band's many demos, which is what Horrified was when it was recorded in 1986 and released as the Slaughter of the Innocent tape. That sort of audio is what you'll hear times 100 as featured in this June 9, 1991, in-store concert Repulsion did at Schoolkids Records, 523 East Liberty Street. But it's still wonderful to see the inside of Ann Arbor's most legendary record store once again.

Horrified received its official release in 1989, and that's the record vocalist-bassist Scott Carlson is referring to when he points to the wall at Schoolkids and says, "The is from our album—up there" before the band rips into "Pestilent Decay."

June 9, 1991, was a Sunday and, before the videographer steps into the record store, he records a long line of people standing in the dark to get into the Michigan Theater. East Liberty was hopping that night. The sunset was at 9:10 pm, so this show was likely after Schoolkids closed for the day, but I'm not sure what event was drawing such a big crowd at the Michigan Theater. According to The Concert Database, there were no bands playing at the Michigan Theater that night—the previous show was Laurie Anderson on May 11 and the next one was  Kraftwerk on September 27—and City Slickers was the number one movie in the country that weekend, but I don't recall first-run mainstream films being a regular thing then for this venue. (Looking into it; will update if I find anything. Very important, you know.)

Update: The crack staff at AADL's Old News figured out it was Taxi Blues, a critically acclaimed 1990 Russian movie, but not one I would assume could draw such a big crowd. Also, the start time was 8:40 pm, and despite the darkened skies, the Google Machine tells me sunset that day wasn't for another 30 minutes. The East Liberty corridor is a tunnel.

While you should absolutely listen to Repulsion's badass Horrified if you want to hear one of the earliest examples of extreme metal, the main draw of this video for Washtenaw County folks is seeing the racks and racks of expertly curated LPs at Schoolkids Records. Check out the 39-minute below, but fair warning: Some cretin on the street who was there to see the band uses the N-word at the :27 second mark.