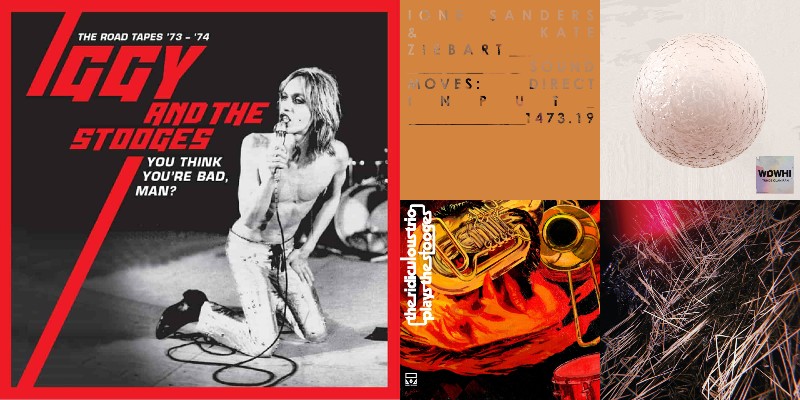 This holiday edition features folks who haven't called Washtenaw County home for a while—or ever—but they still have some sort of connection to our little slice of Michigan. The week includes live recordings of Iggy and The Stooges, a jazz-punk interpretation of The Stooges by The Ridiculous Trio, Kelly Moran's prepared-sound electronica, future funk from Tunde Olaniran, and experimental-classical ambiance from Ione Sanders and Kate Ziebart.

Iggy and The Stooges, You Think You're Bad, Man? The Road Tapes '73-'74 (Live)
This new five-CD collection of five live shows by The Stooges as they toured in support of Raw Power is strictly for the hardcores. The concerts from Los Angeles (September 16, 1973), Baltimore (November 1973), and New York City (December 31, 1973) are rough audience recordings, making the band sound more muffled than maniacal despite The Stooges still energetically playing their brand of fully confrontational rock 'n' roll. The two Michigan shows—October 6, 1973, and December 9, 1974, the band's final show for 30 years—have a little better fidelity and may sound familiar to Stooge-o-philes since those recordings are what make up the various editions of Metallic K.O.

The Ridiculous Trio, The Ridiculous Trio Plays the Stooges
Chicago's Ridiculous Trio attacks The Stooges' songs in much better fidelity than the aforementioned release, which means you can clearly hear the kazoo-sounding trombone's guitar-like leads, the tuba's throbbing bass lines, and the constantly bashed drum kit. Free-jazz punkadelicia.

Kelly Moran, Chain Reaction At Dusk, split EP with Merzbow
Gabríel Ólafs, "Think of Home (Kelly Moran Rework)"
Kelly Moran earned a B.M. in piano performance, sound engineering, and composition at the University of Michigan in 2009, released her first album in 2010, and has become a critically acclaimed sound sculptor who makes albums for the legendary electronic-music label Warp Recordings as well as for smaller labels, such as this split single she did with Prurient on his Hospital Productions label. Moran is also an in-demand remixer and she added her twinkling touch to Gabríel Ólafs' shimmering "Think of Home."