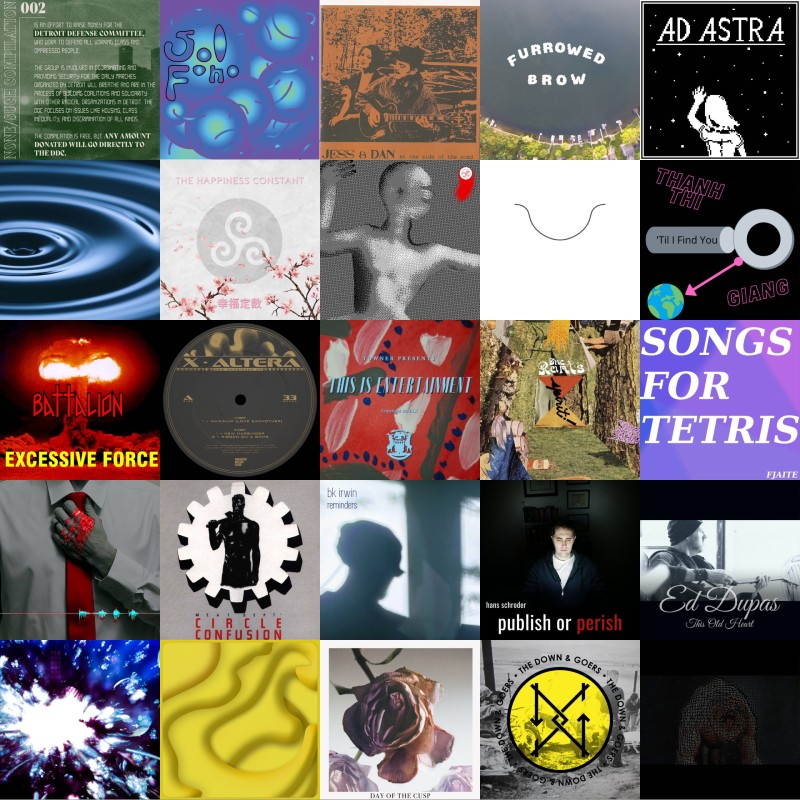 Today is the last Bandcamp Friday of 2020—the monthly fee-waiving day when artists receive 100% of the money from purchased items. So, to celebrate shopping locally, here are 25 new and newly reissued releases from Ann Arbor musicians, bands, and labels. It's the Friday Five if it lifted weights and ate a high-protein diet.

You can also read the previous 12 Friday Fives right here, which means you'll get to discover music from 50-plus other artists in Washtenaw County.

Also, here are eight posts in our Music in the Time of Quarantine series that we did from March to May, which means there are umpteen more Washtenaw-associate releases to discover and purchase on Bandcamp and beyond.

Heck, while you're here, take a peek at all our music posts, many of which also have links to Bandcamp releases by local artists.

Various Artists, Compilation 002
The second comp from none/such, a techno and electronica label run out of Ann Arbor and Frankfurt, with all proceeds going to the Detroit Defense Committee

Hans Schroder, publish or perish EP
Nerd rap that's all about the pressures and politics of grad school. No, really.

Battalion, Excessive Force
Reissue of this 1995 album from Chelsea thrash metallers Battalion. (Their Bandcamp label says they're from A2, but gotta give the true love to Jiffy City.)

Isolation Sundaze, Chaotic EP
You should just go to Isolation Sundaze's Bandcamp page and catch up on everything the electronica collective has produced virtually in 2020—and astounding 16 EPs, including the one below. All good, too.

Circle Confusion, Meat Dept.
Reissue of this 1988 album by industrial goth-rockers Circle Confusion. I remember seeing this album at Schoolkids Records but never heard it. It came out on the French label Lively Arts, a sublabel of the Stooges-obsessed New Rose Records

Sol Fono, Bedroom Haus EP
Leftfield techno that would not be out of place on the Warp or Planet Mu labels.

FJAITE, Songs for Tetris EP
"Friend needed songs for a Tetris game they're making. Here's the songs I wrote for it." True!

Jess and Dan, At the Side of the Road
Americana artist Daniel Orcutt published a punch of his old albums on Bandcamp recently, including a few from The Nick Strange Group. The most recent rerelease is this one with singer Jess (I can't find her last name).

Cinder Stage, Another 22
Abstract weirdness that mixes almost every genre into a blender and spits out a dada-esque sonic tapestry.

Towner, This Is Entertainment
Reposting this recording despite already interviewing the band because Towner just released this great album on CD, and if you're a geezer like me, you still appreciate the audio quality of that format.

Thanh Thi Giang, Till I Find You EP
Almost a K Records-style naivety on this five-song collection of indie-pop.

Day Of The Cusp, The Fragile Corpse
Shambling guitar-pop that touches on everything from garage rock to atmospheric indie.

Ed Dupas, "This Old Heart"
The latest single from this Americana and country artist.

A World Without Gods, The Happiness Constant
Fuzzy indie rock. Get our yer flannels.