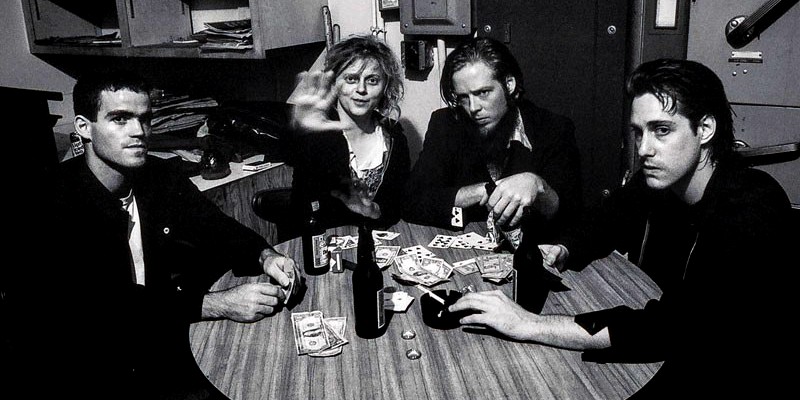 I was a freshman at Eastern Michigan University when the Laughing Hyenas released their debut recording, 1987's Merry Go Round. I ended up seeing the band play live many times after this at The Blind Pig, Club Heidelberg, and Nectarine Ballroom in Ann Arbor as well as at a few places in Detroit and East Lansing. I have little memory of most of the gigs because I have little memory of most gigs, or things in general, but one particular show still feels as vivid as the blood streaming down John Brannon's arm.

The Lab was an Ann Arbor punk house at 144 Hill St. for two years (1992-1993), and on October 2, 1992, the second version of the Hyenas performed there soon after the residents started hosting shows. Bands played in the basement, and you had to climb down a ladder to get there. Packed like sardines with no exit other than that ladder, The Lab was a death trap waiting to snap.

While Brannon was always known for being an intense performer, his handsome face extending into a Scream mask when he yelled into his distorted PA, The Lab's low-ceilings offered some extra Tom Savini-style bloody theatrics. The heating ducts were just above Brannon's head, and during the Hyenas' performance, he would reach up and bang on them as his throat conjured Beezlebub. But Brannon must have caught his paw on a piece of sharp metal and the blood started to flow down his arm—it seemed like a river and I felt like it was about to flood all over the face of li'l ol' Brannon-adjacent me. Naturally, the show went on, and I nearly passed out. I don't *think* Brannon wiped the blood all over his mug, but I want to think he did.

That same year—or maybe it was the year before—I was working at Play It Again Records, a brief-lived Ann Arbor spin-off of the popular Royal Oak store, located on South Forest just off South University, behind the Village Corner party store (RIP). Brannon was a regular presence in downtown Ann Arbor—a street-walking cheetah with a heart full of napalm, if you will—and I would see him strolling around town, visiting record stores and the like.

One day he came into Play It Again. I was intimidated not only as a fan of Laughing Hyenas but as someone who was also terrified of Brannon's intense stage demeanor. Well, my fears were unfounded: Whatever personal struggles he was going through then, and there were many, Brannon was totally chill in person, and the deadpan humor he shows regularly on social media today was perfectly evident then as we chatted about music.

As we talked, Brannon pointed up at a rare Sisters of Mercy record—or records—that hung on the wall behind the register. I think it was the 1983 Reptile House EP, and maybe also the Alice EP—both were fetching large sums of money then because the Sisters had crossed over from this gothic Stooges-and-David-Bowie-influenced DIY band with a drum machine to well-produced, alt-rock hitmakers with songs like "This Corrosion" and "Lucretia My Reflection."

As Brannon and I talked about the Sisters, he dug into his trenchcoat and produced a cassette tape. He said, "Can you record that for me?" pointing to the big-ticket item (or items) on the wall, which I remember being a minimum of $80. Without hesitation, I said, "Sure," pulled down the record(s), cued up the turntable and tape deck, and dubbed the Sisters of Mercy rarities for John Brannon. When the recording session was over, Brannon thanked me, tucked the tape into his long jacket, and headed back out onto the mean streets of Ann Arbor.

Thank you for letting me back up these stories in public as my body's hard drive begins to fail.

Now, for those about to rock with the Laughing Hyenas for the first time, we salute you. As a bonus, I've included some rough-and-ready concert and practice videos of the band performing in Ann Arbor and a few albums by a few pre- and post-Hyenas bands.

The first time I heard this record, I remember being terrified by John Brannon's voice on the opener, "Stain." He sounds feral. The tune is built on two chords, but the song swings hard with Jim Kimball and Kevin Strickland locked in tight as Larissa Strickland plays with a slashing guitar style that comes in and out of the groove. In many ways, the blueprint for all Hyenas songs: simple and woozy guitar riffs undergirded by a killer rhythm section as Brannon howls like a horror-movie scream.

The original 1987 version of Merry Go Round was a mini-LP with six songs; the 1995 CD edition expanded it into 11 songs with "Soul Kiss" (originally only on the 1987 tape edition of the LP), "Candy" (the B-side to the 1990 single "Here We Go Again" from that year's Life of Crime album); a live version of 1989's You Can't Pray a Lie penultimate track, "Dedications to the One I Love," which originally came out on a German compilation 7-inch in 1990; the 1990 studio outtake "Don't Bouge My High," which features guitarist P.W. Long who would take Jim Kimball and Kevin Strickland with him in 1991 to form Mule; and a cover of Alice Cooper's "Public Animal #9" from a 1992 tribute 7-inch to "The Godfather of Shock Rock" put out by Sub Pop.

This eight-song follow-up is every bit as aggressive, moody, broody, and swaggering as its predecessor. It only came out on vinyl in 1989, but it was appended to the CD version of 1990's Life of Crime.

By this point, the Hyenas had perfected everything about their approach to terrifying punk-blues anthems. But the eight songs here would be the last ones to be made with the original rhythm section as the band's personal lives devolved and some members' addictions grew. The Third Man vinyl reissue of Life of Crime included the studio outtake "Save Me Tomorrow," but for some reason, it's not part of the Bandcamp edition. Another nugget: The Hyenas made their first three albums with Butch Vig, then a little-known producer from Wisconsin. They made Life of Crime right after Vig had recorded a song called "Smells Like Teen Spirit" because the musicians in the up-and-coming band Nirvana were big fans of the Hyenas and wanted to work with their producer.

The four-song EP was recorded during what might be called the Laughing Hyenas' wilderness years. The rhythm section had left to form Mule, Larissa Strickland had moved to Florida, and Brannon was a fixture in Ann Arbor. But Strickland and Brannon, who were broken up as a couple by this point, decided to restart the Hyenas, so they called on their old drummer pal Todd Swalla from the Necros as well as Cleveland-based bassist Kevin Ries, his only studio appearance during his brief tenure with the band. Even with the new musicians, the Hyenas were working in the style established on the previous records, but with less swing and more linear momentum on Crawl.

Necros bassist Ron Sakowski joined his rhythm section mate Swalla soon after the Crawl EP came out, but this version of the Hyenas waited three years to record due to constant touring and additions ravaging the whole band. The album generally cleaner, slower, and more straightforward than much of the Hyenas' past work, with Brannon even relying on his gothic croon as much or more as on his house-of-horrors scream. The Third Man vinyl reissue added "Shine," the one song the Hyenas recorded after Hard Times and with the short-tenured drummer Damon Che from Pittsburgh math rockers Don Caballero. That song isn't on the Bandcamp edition of Hard Times, and the Third Man two-LP release of the vinyl version was accompanied by the Crawl EP and four Covers: Stolen Tapes 92 to 94, which was a double 7-inch band pressed themselves in 1995. Those four cover songs—including The Rolling Stones' "Under My Thumb" recorded live at rehearsal in Ann Arbor, 1993—are also not on the Bandcamp edition of Hard Times.

The Hyenas petered out soon after the hard-wrought Hard Times tour ended. Brannon continues to play and record with Easy Action, which he formed with Sakowski in 1998 and named after an Alice Cooper song, and a semi-reformed version of Negative Approach, which also features Sakowski. Larissa Strickland died on October 8, 2006, of a drug overdose. In 2020, Third Man released a compilation of her pre-Laughing Hyenas band, L-Seven.

Check it out, best band to…

Check it out, best band to come out of Ann Arbor in the last 35 years