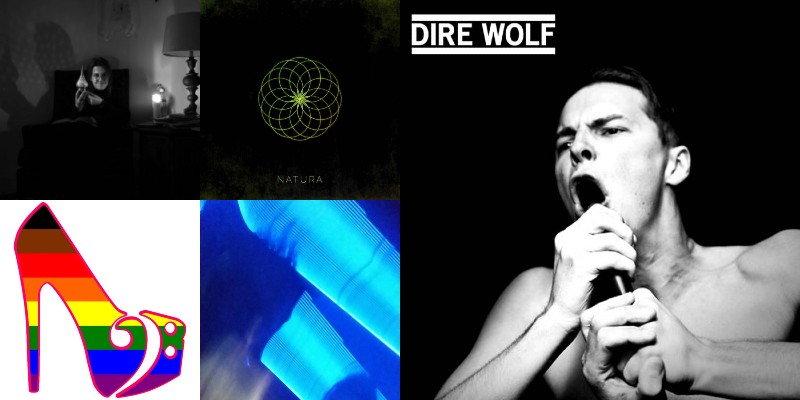 This week features folky indie from Lily Talmers, Euro-pop from Natura, low-brass-Nintendo-wave from Men in Dresses, shoegaze from content., and hardcore from Dire Wolf.

Lily Talmers, "The Push and the Pull of It" single
Recent U-M grad Lily Talmers released four singles of lovely indie-folk in 2020, and she's about to release her debut album. This is the first single.

Natura, "Soarings" b/w "New Beginnings" single
Two guys from Ann Arbor along with a vocalist named Sonja have debuted with a two-track single. The A-side feels like a Euro-pop hit right out of the box. The B-side has more of B-side vibe in that it's more a sketch than a rounded song, but I could easily hear it being remixed into a club banger. A promising debut.

Men in Dresses, Starlust
One of the strangest concepts I've come across in a while: two well-studied low-brass instrumentalists combining forces to create Nintendo-esque music with hip-hop-ish beats. Brendan Ige (tuba, euphonium, bass trombone, etc.) is a doctoral student at U-M for music and Brooklyn-based tubaist John Baylies keeps his horn in the case and provides the electronics for Starlust, the duo's debut.

content., Bluelight
Bluelight is the debut album by this shoegaze-y Ypsi artist, recorded 2019-2020 at The Greenhouse in Ann Arbor. This appears to have come out last spring, but more recently, content. released almost-club-oriented demos, a one-off single, "Adrienne," which sits easily among the haze of Bluelight, and a split single with Detroit noise-core group Happiness is Impossible.

Dire Wolf, complete discography
While Sigma Phi, the University of Michigan's “Metal Frat,” hasn't regularly hosted shows since 2013, back in its heyday, the house at 907 Lincoln Avenue was a regular tour stop for up-and-coming bands in the hardcore and metal worlds. One of the mainstays of The Metal Frat's early days was Ann Arbor's Dire Wolf—see footage here from the band's manic last show there in 2011. In 2020, Dire Wolf's three EPs landed on Bandcamp, giving new listeners access to the group's menacing growl. In addition to the band's self-titled debut below, there's Gloom and Peace Work.