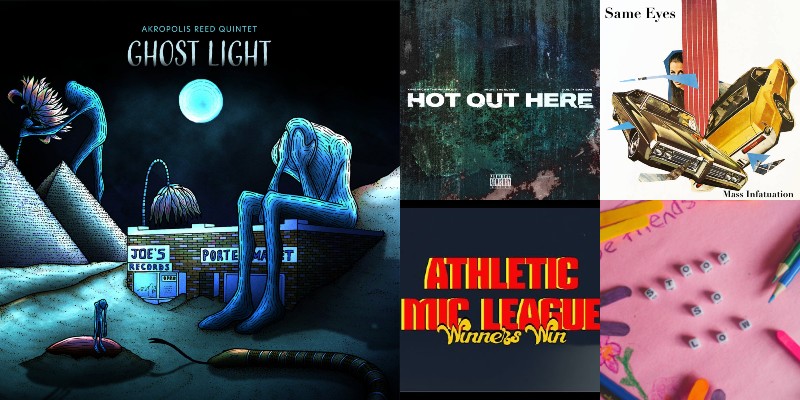 Akropolis Reed Quintet, Ghost Light
Founded in 2009 while its members were students at University of Michigan, the Akropolis Reed Quintet is making a name for itself as one of Southeast Michigan's most creative contemporary classical outfits—and not just because of its music. The group has embraced technology and live-streaming in a robust way, even before the pandemic, which along with Akropolis' new album, Ghost Light, should introduce the ensemble to audiences around the world. The quintet describes Ghost Light as "a collection of works written for them that are in dialogue with various 'ghosts'—histories that are manifest in personal, collective, and even organic contexts. Featuring music by Stacy Garrop, Michael Gilbertson, Niloufar Nourbakhsh, Jeff Scott, and Theo Chandler, Akropolis' precise and dynamic performances are matched by their curatorial creativity and commitment." The album was recorded at First Presbyterian Church in Ypsilanti and Detroit'ss Tempermill Studios. While Ghost Light doesn't come out until April 9, you can preview one of the songs and pre-order the album on CD or digital at Akropolis' Bandcamp page. Additionally, Akropolis will be having a virtual release-party livestream concert on April 9; more info here. You can read previous Pulp pieces on Akropolis here and here.

The Kelseys, "Stoop So Low"
Another great song from this Ann Arbor trio—this time with more of an acoustic-bent than the band's other recent singles—and another fantastic video. The Kelseys are unofficially the official pop band of the Friday Five.