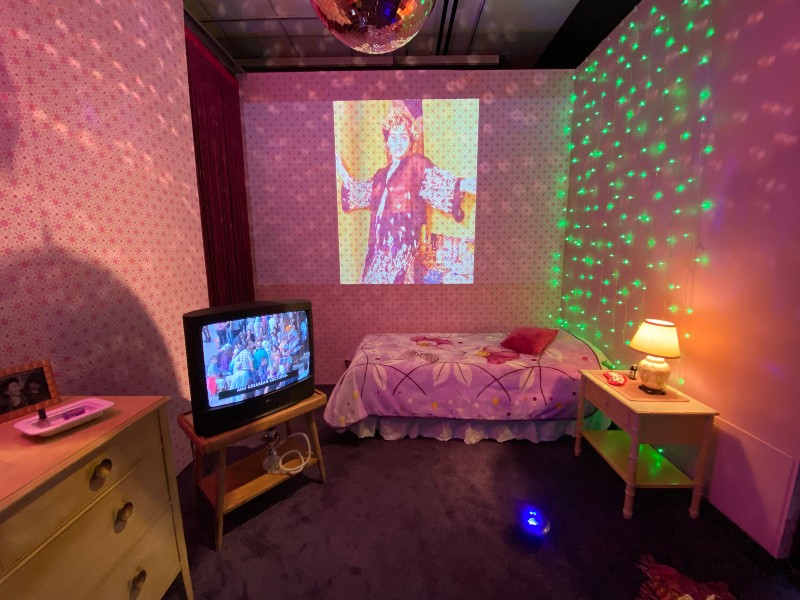 The name For Your Eyes Only also intrigued me: clearly, this installation is for consumption by many sets of eyes, and the title's four words situate the piece within shifting paradigms of privacy ushered in by the digital age. In varying capacities, we place ourselves and our lives for view online yet expect absolute ownership over the content. Or perhaps, in another example, content is created with the illusion of exclusivity, inviting outsiders into a private life—when, in fact, the digital product is simply a construction for mass consumption. Diaz’s reconstructed bedroom is both of these, inspired by personal experiences, yet made as part of an ongoing series of immersive installations that place the viewer outside of the space, looking in. The distance created by the gallery glass creates the impression that while we may be able to see inside this space, we will never know what it might be like to be the person living inside of it. With the added dimension of COVID-19 forcing more of us to broadcast ourselves inside our homes, Diaz’s work seems to expand and ask more of us—what does it mean to be a bystander, looking into private spaces, virtual or otherwise, of another person?

Diaz’s constructed, curated, dream-like space is described as a “typical teenager’s bedroom," complete with “homage to the bedroom disco—a sanctuary for uninhibited dance and self-expression.” The staging includes vibrant shades of pink and hallmark teen-bedroom items such as discarded clothing, a school backpack, and a television set. Upon closer inspection, the artifacts around the room reveal that more is at play than in an average, sleepy suburban teen’s room. Look closely, though, and objects such as protective goggles and an ACLU “Know Your Rights” handbook appear alongside a vintage 1990s television broadcasting clips of political speeches from “women-led political rallies from across the Southwest Asia/North Africa (SWANA) region,” which are “interlaced with speeches by political figures like Egypt's Gamal Abdel Nasser and Yemen's Ali Abdullah Saleh.” In this way, Diaz combines aspects of her personal experiences growing up with broader cultural and political concerns.

In addition to the television broadcast, a projector depicts dances “of women and non-binary persons dancing in a reel of selfie videos” on a wall segment above the bed. In the exhibition statement, it is noted that though this stream of joyful dancing “may seem innocent and innocuous ... they can also be seen as acts of defiance that assert the autonomy of bodies that have been surveilled, scrutinized, and censored throughout history.” These selfie videos, paired with the media on television and the human-rights-march items strewn around the room, it is clear that the elements of the installation work together to create layers of meaning surrounding identity, autonomy, and censorship. Another statement from the exhibition media states, "The images demonstrate the fluctuating attitudes and regulations impacting human rights and freedoms based on gender, and exemplify how—whether we are physically at a protest or sharing our physicality in virtual spaces—our bodies are engaged in some level of risk."

This is particularly intriguing now, as many of us work in an altered digital environment, sharing videos of our living spaces with coworkers and the public alike. What risks are inherent in this new way of life? How will this experience alter the fabric of daily life once we have “returned to normal”? For further reading, Lila Nazemian’s thought-provoking essay questions women’s rights and freedom movements in the Global South through the lens of Diaz’s exhibition.

For Your Eyes Only is also featured in the 59th Ann Arbor Film Festival's In the Screen! series, which will feature artist showcases through March 28.