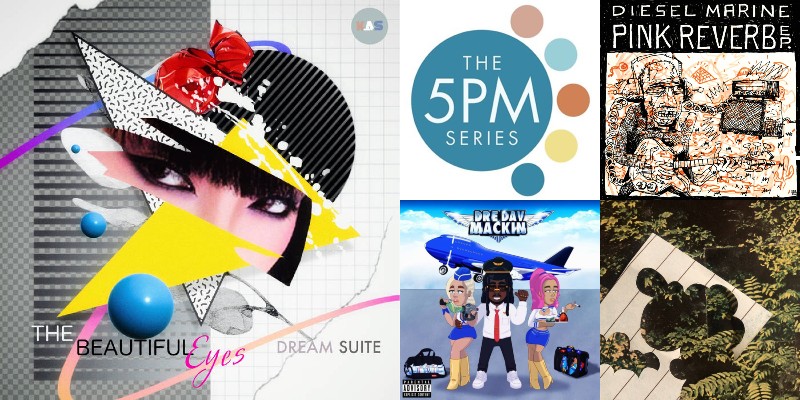 Various Artists, The Beautiful Eyes Dream Suite
The uber-talented Ann Arbor native Kawsaki, whom we interviewed recently, put together this excellent 17-track compilation of vaporwave / synthwave / retrowave electronica on his Kawsaki Audio Space label, featuring artists from around the world.

The 5 PM Series
I'm late for this project—the season finale was April 16, featuring jazz pianist Cole P. Abod performing a tribute to Chick Corea—but all 28 of the concerts on The 5 PM Series' YouTube page. Run by three pianists, including University of Michigan doctoral candidates Hillary Santoso and Alissa Freeman, this classical and jazz concert series began in February with an eye on helping musicians financially during the pandemic. Though The 5 PM Series is on hiatus at the moment, you can still enjoy all the previous concerts and donate to the musicians.

Dre Dav, Mackin EP
Ann Arbor's Dre Dav, "your friendly neighborhood stoner," had a super-productive 2020. Not only did the rapper release four albums last year, he co-created a baby who was delivered in 2021. Congrats to the new dad on the release of his first child and his latest album, the funked-up Mackin.

Diesel Marine, Pink Reverb EP
Dexter visual artist Dylan Strzynski is also a talented multi-instrumentalist, and his Diesel Marine project revels in what he calls "reverb guitar music." Imagine listening to a Ry Cooder soundtrack during a midnight drives on Huron River Drive with the windows open. I may have used that exact description the last time I wrote about Diesel Marine but the Pink Reverb EP conjures the same late-night vibes as last summer's Staycation.

Charley Cardboard, Leaf Code
Craig Johnson, who I think is based out of Ypsilanti, is another visual artist with a musical side. His latest release as Charley Cardboard features him on "electric guitar with floppy tunings, an old Wurlitzer drum machine, and spring reverb." This eight-song instrumental album sometimes feels like a twangier, lo-fi version of Durutti Column.