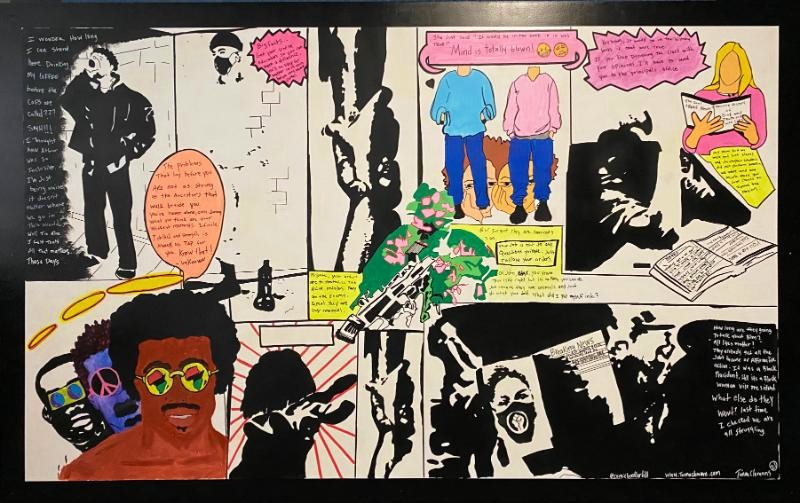 Below is our interview with muralist T'onna Clemons. 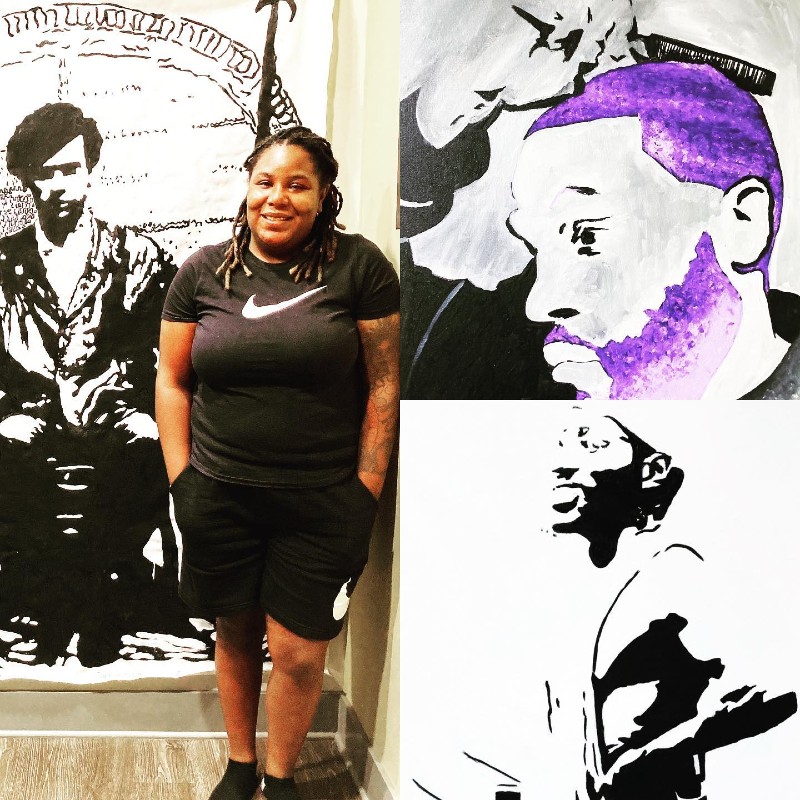 Q: Tell us about yourself.
A: I'm born and raised in Ann Arbor. Currently, a freelance artist looking for steady work. I've been traveling around the world for the past several years gaining experience in different mediums such as oil, gauche, acrylic, watercolor, and welding. I studied fine arts at Eastern Michigan University, The Art Institute of San Francisco, and art history at Arizona State University. I'm currently working on my master's degree in museum studies at ASU.

Originally a graphic designer, I've used those skills to develop my own style of mixing media to create futuristic textures. After 15 years of painting, I developed a style that focuses on conveying and capturing the emotions of the African-American experience currently in America. I recently extended into wildlife and wilderness portraits. I focus on utilizing my educational background and life experiences to tell stories using texture and sharp images to garner conversations and to incite emotions.

Q: What's your earliest memory of making art and your earliest memory of being affected by art?
A: My earliest memory was in pre-school when I made what I called "chickens fighting" for my grandma and she had it hanging up in the dining room for 20 years until she passed, but it was really just an orange blob of crazy lines. Today, if I looked at it, it definitely conveys anger and action, which is cool to me now. During elementary school, the only way I could focus in class was if I could draw. I mostly drew waves like Hokusai and guys with Elvis' hair. Still to this day I need to doodle or draw to focus.

Q: Tell us about your mural and your art.
A: This piece is in comic-book style, It was done with Uni-Posca oil-based paint markers, acrylic paint. and glow-in-the-dark spray paint. It took me two weeks to complete and my process is to just get it done because I lose interest and get bored easily with certain subject matter. I started off with the two guys standing because I feel that everytime Black people look like they are having fun or enjoying themselves, a Karen comes along and calls the cops. I was influenced by Banksy and Scott Williams in regard to their stencil work. I did not use stencils. I was also influenced by my own life and upbringing in Ann Arbor in particular. Growing up here, you are told this is such a liberal and inclusive place and that is just not the case; if you grow up believing that, it can be detrimental to one's beliefs. I specifically chose to paint a young black boy in school being chastised by a teacher because he wants to give his opinion on Black history. The boy is frustrated and so is the teacher and they both feel each others irritance, thus the boy decided to draw a comic book in class depicting what his world looks like.

The two guys with no heads were inspired by social media with the emojis and is conveying the outrage of the child. The army man signifies people of a different race whom are not bad but have to make tough decisions based on their survival. The guy reading the paper at the bottom is an out-of-touch bigot-type that just doesn't get it (Karen), which is what Black people generally have to deal with on a daily basis. The hands are just that, helping hands to pull eachother up through all our struggles no matter what. The woman with her hand out signifies hope and safety and peace. The three Black guys represent ancestors, wisdom, yin and yang, evolution. They also have uplifting word for people who have been torn down and made to feel like they're nothing, what the boy in class feels. The two guys standing on the corner minding their business is just a regular everyday thing for Black people: "Can I just stand here and chill or am I going to lose my life just because I'm standing here?"