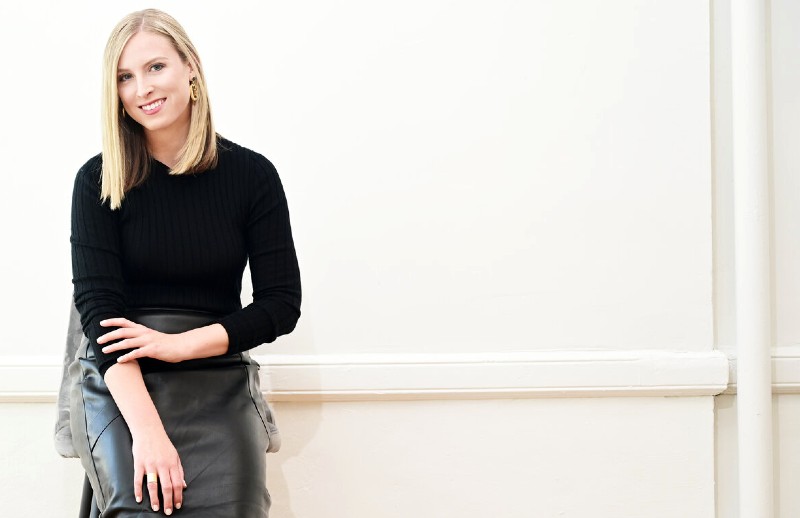 This story originally ran July 27, 2021. We're rerunning it because March 22, 2022, is the one-year anniversary of the album's release. Her latest single, "Lot Lot," is available here.

Hannah Baiardi has been writing and performing music since age 3, so it’s no surprise that her first full-length album, Straight From the Soul, is a polished and thoughtful work.

Although a listener might categorize the music as contemporary jazz, Baiardi clearly draws on other influences as diverse as R&B and new age, and it all comes through on the album. The University of Michigan grad (BFA ’18, jazz studies) offers smooth, heartfelt vocals and evocative piano playing, which combine for a distinctive and memorable sound. She’s backed by an excellent supporting cast, including Karen Tomalis on drums on most tracks and Marion Hayden or Ryan King on bass.

Baiardi writes much of her own material. The album features five original compositions, ranging from the wistful yet hopeful “Who Can Relate” and “Distant Land” to the joyful “Let Go” and “Feel It.” The album concludes with “Transit,” an outstanding instrumental showcase.

The album also features two pop favorites from old movies—an introspective take on “Windmills of Your Mind” from The Thomas Crown Affair and “The Summer Knows” from Summer of ’42, which makes for ideal listening in the summer of ’21.

Baiardi recently agreed to answer a few questions via email.

Q: Your bio relates how your musical talent was clear from a very early age. Did you always know music was something you would pursue professionally?
A: From my earliest memory, I have been at the piano writing songs. It’s hard to separate my life from my music. While I recognize this is one of the toughest and murkiest industries to be in, I still decided to pursue music to honor my higher calling. Music has moved me and continues to help me evolve in my spiritual journey. I wouldn’t have it any other way!

Q: Although you previously released an EP, this is your first full album. How long has it been in the works? How did you go about selecting material?
A: Yes, first professional full-length album—complete with a radio campaign! The songs on the album have been in the shed for a good one to two years before the album debuted in spring of 2021. COVID-19 delivered some blows to the production, but I am very grateful that the songs eventually found a way to be expressed all this time later. I wanted to make a sort of “stepping out” album, showcasing my evolving sound and paying homage to the composers and songwriters I love.

Q: You’ve noted that your influences extend well beyond what we typically think of as jazz. How do you think that has affected the overall sound of this album?
A: I think it has resulted in a more blended album, one where if asked to describe my music, you might take a pause and scratch your head. The best compliment I could ever dream of would be to hear in reply—“It just sounds like Hannah!”

Q: Did the pandemic affect your songwriting on this album, or did it have an impact on the overall vibe of the recording?
A: Thankfully, much of the album content was completed before the pandemic. While it waited, I was able to really concentrate on the arrangements, the instrumentation, and the feel for each track. It was a relaxed process and more worth the earning.

Q: What were some of the practical challenges about making an album during a pandemic? Did you have to worry about issues like masks and things while recording?
A: Yes, we did. We wore masks, socially distanced, and rehearsed in smaller groups. Singing in a studio booth all alone was nothing new, but we did have to become far more mindful about spacing and also get more savvy with tools like Zoom to rehearse.

Q: What’s your basic approach to songwriting? Where do you find inspiration? Do you typically start with a melody or a lyrical idea, or some of both?
A: The music and lyrics seem to flow together for me. Songwriting feels like a stream of consciousness. If I feel a new melody or idea coming together, I’ll hit record on my phone and drop in a new voice memo. Then, I’ll find the central feeling and tweak the lyrics, flesh out the form and sit with it for a few days before revisiting again. At which point, if I feel it has potential, it’ll land in the studio or go to a producer. If not, it sits in Voice Memos until the time is right.

Q: There are only two covers on the album, and they’re both classics from the same songwriting team, Michael Legrand and Alan and Marilyn Bergman. What’s the particular appeal to you of their work?
A: I love the work of the Bergmans and Michel Legrand. It struck me right away, there have been so many beautiful renditions, I felt honored to be able to contribute my own. You can hear the romance in the lyrics between the songwriting duo and Michel’s melodies are radiant, haunting and evocative. The synergy between these collaborators took these songs to the timeless realm.

Q: “Transit” is a particularly effective way to close the album, showcasing both your piano playing and your composing skills. What inspired that piece?
A: Thank you! Long moments or walks in nature coupled with the inspiration from pianist George Winston really fueled this song. I wanted to capture a sense of wonder, ease and presence. It came from a place of inner solace and childlike wonder. Whenever I play it, I really have to remember the headspace I was in when I wrote it -- and it’s often a challenge to replicate!

Q: Was it difficult not to be able to perform live during the pandemic? How did you cope with that challenge?
A: Yes indeed, as I imagine for many, many artists. The cord of communion between audience and artist was snapped. It was a beautiful process to see resourcefulness and adaptability in action as artists took matters into their own hands and hopped on live-streaming platforms. As a not-so-tech-savvy person myself, it helped to push me into new territory and take some risks. The “unpolished” off-the-cuff gig or show suddenly was met with gratitude and ease—not as much judgment or expectation. The art changes when that kind of pressure is removed.

Q: I believe you’ve recently started to do some performing for audiences. How has it felt to get back into that after an absence?
A: Yes, it has felt GREAT. Even one live show makes a huge difference. Being a first-time performer at the Ann Arbor Summer Festival this year was very exhilarating. To see smiles, hear laughter, and truly reconnect was a blessing.

Q: You’ve described this album as a first step in truly embracing your sound. What’s next on your musical agenda?
A: More collaboration! Working on your own material or refining your own sound is quite insular—especially when you see the beauty that happens when you work with new artists, producers, or other songwriters: your sound begins to change and you open the door to myriad possibilities. In between performances and new material, things are picking back up!

Q: Do you have any other projects in the works that you’d like to mention, or anything else you’d like folks to know?
A: I’ll be playing Tuesday, Aug. 10 at the Blue Llama for a fun new roots music series they started. Should be a really fun show. Other than that, I’ll be doing some traveling, trying to fill up the creative bank with new sources of inspiration, and starting some new musical projects. As Teena Marie says, “I’ve got to keep my irons in the fire!”

Hannah Baiardi’s album "Straight From the Soul" is available on Spotify, Apple Music, Amazon Music, and Bandcamp. More info here. Baiardi also hosts an interview show, "Hannah's Corner," on YouTube where she chats with fellow musicians and creatives. The U-M grad gave the School of Music, Theatre, and Dance an on-video track-by-track breakdown of "Straight From the Soul" over on the SMTD page.