The Future Is NOW: "Stephanie Dinkins: On Love & Data" at U-M Stamps Gallery 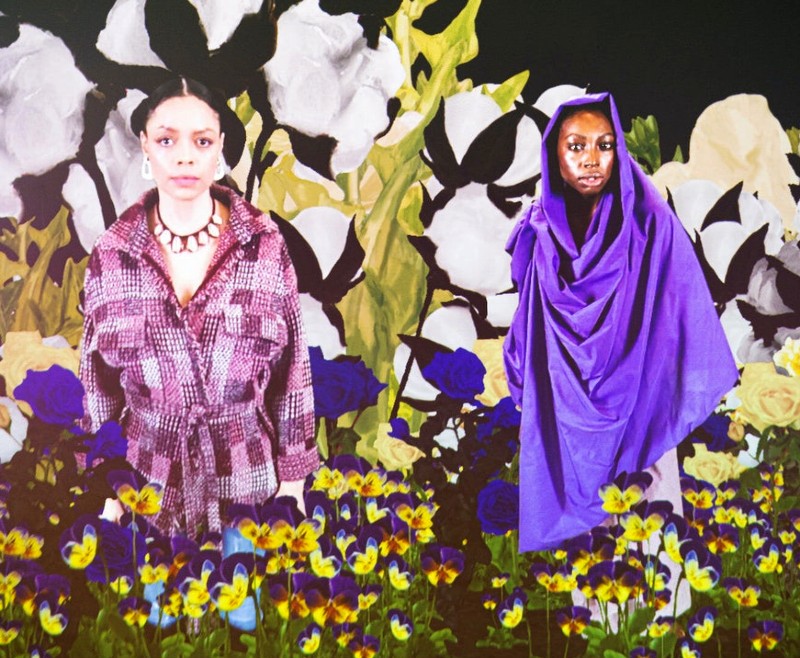 “Binary calculations are inadequate to assess us,” states transmedia artist Stephanie Dinkins, and she approaches AI and technology with this premise in mind.

Her work is a constant unsettling and renegotiation of current technological and social power systems, achieved by asking audiences to consider and create what she calls "NOW." Through her concept of Afro-now-ism, she proposes a collaborative project in which audience members work to dismantle normative, often violent technological structures and build new, inclusive ones.

The Stamps Gallery's Stephanie Dinkins: On Love & Data is the first sur­vey of works by this artist "who cre­ates plat­forms for dia­logue about arti­fi­cial intel­li­gence as it inter­sects race, gen­der, aging, and our future histories.” She makes interactive works that tell us our futures begin now, so we must work to create the world we wish to see.

At the front of the gallery space, a 2021 work titled Afro-now-ism welcomes visitors into the space. A large neon sign reads "AFRO-NOW-ISM," with the words "NOW" and "OWN" illuminated in yellow and intersecting the bright purple and red of "AFRO-NOW-ISM," creating a cross-like design. The gallery wall text illuminates the work:

“Afro-now-ism" spelled in purple, reminds viewers of the Pulitzer Award-winning book The Color Purple by Alice Walker … meanwhile the red hyphens emphasize the urgency and importance of self-determination and imagining anew. The words "now, now, own, now’"spelled in a luminous yellow, embeds a sense of glory, pride and celebration that is embedded within Black culture and can never be taken away.

Dinkins says Afro-now-ism is about “tak­ing the leap and the risks to imag­ine and define one­self beyond sys­temic oppres­sion. … For black peo­ple in par­tic­u­lar, it means con­ceiv­ing your­self in the space of free and expan­sive thought and act­ing from a crit­i­cally inte­grated space, allow­ing for more com­mu­nity-sus­tain­ing work.”

On Love & Data not only provides immersive experiences with existing interactive works but asks audience members to help build new technologies through direct feedback and participation.

In Say It Aloud, 2020-2021, an immersive installation, Dinkins employs the character Professor Commander Justice (PCJ) who asks participants to “supersede distractions to claiming our sovereignty, wholeness and propriety.” If a visitor wishes to record something, their footage will be added to the WEbX environment and a “cacophony of voices advocating for and inventing new ways forward.” The only thing you must know is, “What do you in your heart of hearts want to create?” No one said building the future now would be simple.

Earlier this year, Secret Garden, which is also included in On Love & Data, was featured at ONX Studio in New York and is still available as an online exhibit. While the online experience is rewarding, it's much different than that of seeing it in the gallery.

Secret Garden is a visual and sensory experience. I was alone when I entered the u-shaped enclosure and the space was eerily quiet. For some reason, my presence did not invite the figures to speak to me—perhaps because I missed a crucial QR code. But as I stood among them and listened to the ambient music, I looked at the women and they seemingly looked back. Later, upon entering the virtual garden in the online version, a cacophony of voices overlapped. Moving through the landscape, some voices became closer, others further. Gradually, a singular story unfolds and the other voices faded away. Though the Secret Garden is highly visual, with an array of color, texture, and movement, the piece is meant to encourage the viewer to listen.

The garden, with its continual cycle of life and death, is a metaphor for the interconnectedness of the past, present, and future. In the space of the Secret Garden, each woman seemingly has her own story to tell. After interacting with the exhibit, however, it becomes clear that their recollections are repeated throughout the space, tied to no one. The women in the garden do not actually speak. Instead, the each of them perform a recorded loop of movement: one woman smiles and then looks away, another moves through the garden as if hiding from view. In an interview, Dinkins points out that some have responded by saying “all the women wear all the stories.”

Binary Calculations Are Inadequate to Assess Us, another 2021 interactive work, is an app currently under development. Dinkins again asks audiences to assist in the creation of data that might, someday, be adequate. Various stations in the gallery allow gallery-goers to experiment with the app on iPads, though it is also available for download on personal devices. The goal of the project is to create “two repositories—one for text and one for image—which will be available for people to use as an alternative to existing data sets.” Ultimately, the project hopes to bring awareness to the process of creating data that informs AI and sharing that “responsibility between the people, government and private corporations.” Where data comes from, who manages it, and who uses it are all interconnected, and there is much room for innovation.

Exploring data bias is especially prevalent in Dinkins’ work with GAN computer-generated prints. In this series, she searched for generic terms like “A Black woman crying,” which resulted in an image of a “pink figure in a black cloak abstraction.” Dinkins notes that these results are much better than her earlier search attempts. The technology continually develops, but years later still produces inaccurate results, with Dinkins noting:

I discovered that within the data the default for the idea of a woman is white, no big surprise there. Using "An African American Woman smiling" yields more visually recognizable results than "A Black woman smiling" [but] that African American woman seems pinned to a time in the past. Add dark skin to the idea of African American and all bets were off. The representation became abstract, psychologically dark and reliant on the base idea of the color rather than a depiction of the idea as a whole. These results, while better still make me wonder what is necessary to depict folks of color more fully and accurately.

Dinkins' work suggests that in order to achieve this goal, technology users and developers need to create a new and more inclusive standard based on the experiences of those previously excluded. Systems should be built and refined by users, in a way that reflects their reality. AI is constantly evolving, after all.

"Stephanie Dinkins: On Love & Data" at U-M Stamps Gallery August 27 – October 23, 2021. On October 7, a workshop will be available (pre-registration required) to put ideas into action and work on the in-progress app known as Our Data.