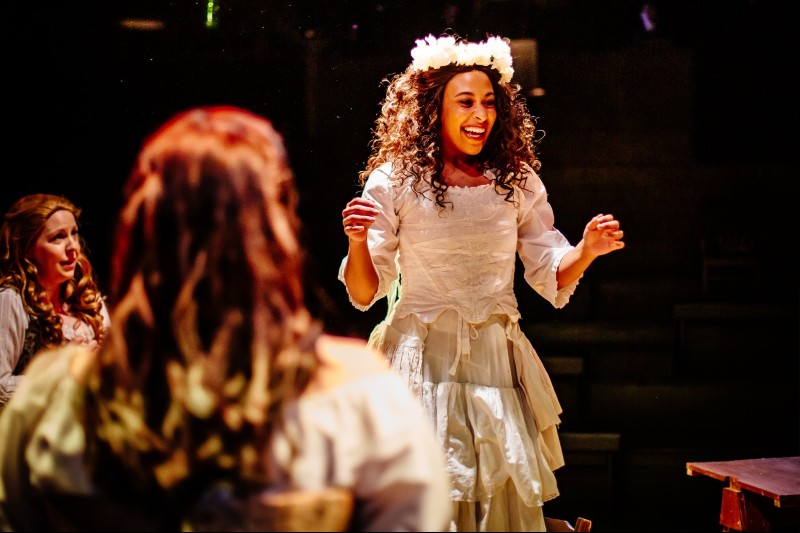 Jason Briggs, Dan Johnson, Chris Joseph, and David Magumba perform as a 1950s-'60s quartet on such beloved songs as "Searchin’," "Poison Ivy," and "Love Potion No. 9" while breaking away for spotlight solos. Tyler J. Messinger joins in on some of the group songs but he’s also the night’s stand-in for the young Elvis. Gayle E. Martin brings the thunder of the blues. Bryana Hall handles some sultry and some sassy songs. Jordyn Davis is the voice to handle a bit of blues and romantic longing. Sarah B. Stevens covers an Elvis song and brings the laughs on a song of a lamented career.

Though best known for their rock 'n' roll songs, Leiber and Stoller did it all as a duo and in collaboration with others. This show gives the performers a chance to create dramatic vignettes from the many sides of the dynamic duo's extensive catalog of songs.

Briggs is a big man with a big voice. He can roar a rollicking song about Smokey Joe’s but he can also find the tenderness in "Spanish Harlem," a song written by Leiber and Phil Spector. Briggs is also an expressive comic presence throughout.

Johnson also shows a humorous side in his woebegone tale of unrequited love in "Loving You." His facial expressions are hilarious and his voice has just the right whine.

Chris Joseph sings a duet with Sarah B. Stevens blending the songs "Love Me" and "Don’t," songs of unrelieved sexual tension that both singers capture well.

Stevens is a gifted comic actress and a high point of this show. She is right in step on "Pearl’s a Singer," a tongue-in-cheek country song that Stevens brings off with droll perfection.

Tyler Messinger has the difficult task of standing in for one of the most iconic singers of all time, but he has a fine voice and an upbeat mood that carries through on "Jailhouse Rock," a number that had the audience clapping along as the cast joined in 1950s-style dancing. He also takes a lead on "Ruby Baby," backed by the quartet.

Leiber and Stoller have always said that they preferred Big Mama Thornton’s version of their song "Hound Dog." So at Smokey Joe’s, Gayle E. Martin gives a hot but comic rendering of "Hound Dog" in response to David Magumba’s plaintive take on the Elvis’ hit "Treat Me Nice." Martin also brings her big voice to the gospel stomper "Saved," with a lively assist from other cast members. Martin also pulls off a difficult dance move.

Magumba’s big moment comes late in the show and it’s pop opera at its most heart-wrenching. "I (Who Have Nothing)" is an emotional outpouring of love that is emotionally and musically demanding. Magumba begins quietly and builds on this melodramatic outcry of love denied and jealousy at its peak. His performance was given the longest ovation of the night.

Jordyn Davis provides the sass on "Falling" and the shimmy on "Teach Me How to Shimmy." She’s a fine dancer and singer.

Bryana Hall brings a sultry authority to the comic "Some Cats Know" and gives a joyful send-off to a lover in "Don Juan."

Music director Tyler Driskill gets a chance to sing a bit of "Charlie Brown" and "Stay a While," but more importantly, his direction of singers and band keep the spirit light and the music rocking. The band is in top form with Driskill on keyboards, Andrew Rosenberger on saxophone, Michael Harrington on guitar, Phil Rinke on bass, and Billy Harrington on drums.

Gerry McIntyre’s choreography provides a fluid movement throughout and the quartet-style dancing will bring back memories of those early groups and of the later Motown dips, dives, and flourishes.

The new theater is in a historic building on Ann Arbor Road in Dexter and it gives The Encore enough room to stage musicals with more complicated choreography and bigger casts without looking cramped. It also allows the band to perform in full view for this production instead of in a box at the side.

Sarah Tanner has designed a set that has a real wow factor in its size, in its detail with a well-stocked bar, great memorabilia from photos of pop singers to old beer signs, and in its size with two levels that provide for more flow and create greater energy. You get the feeling you’d like to spend time at Smokey Joe’s.

The Encore is off to a great start in its new home.

The Encore Musical Theatre production of "Smokey Joe’s Cafe" will continue at the theater at 7714 Ann Arbor St., Dexter through Oct. 10. For tickets, visit theencoretheatre.org, the box office at the Encore Theatre, or call 734-268-6200.