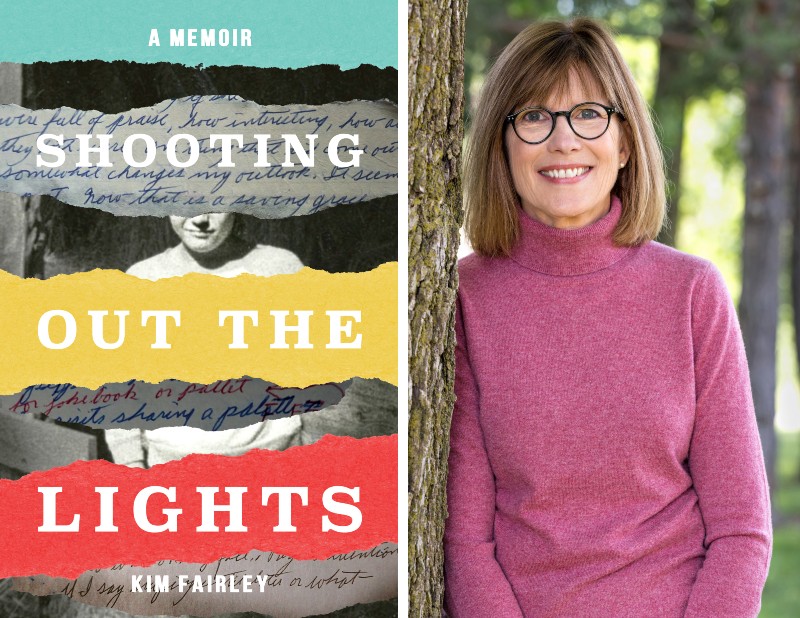 Ann Arbor artist and writer Kim Fairley recalls the early days of her marriage to Vern Fairley and a visit from an unwelcome guest in her new memoir, Shooting Out the Lights. This fast-moving book focuses on what it was like to start a marriage amidst a big age gap, the aftermath of tragedy, and the contentious circumstances of an unrelated child who comes to stay with the couple. Fairley tells the story with humor and tenderness.

While Fairley quickly becomes pregnant at 25 after they married in 1982, the memories of Ben, Vern’s son who died in an accidental shooting, haunt them. Vern agrees to take in Stanislaus, an 11-year-old son of a friend, and their newlywed days are interrupted. The unwanted responsibility forces the couple to face what happened in the past and look ahead to their growing family.

A relic of the past is Ben’s bedroom, which had remained largely the same since his death. Fairley considers cleaning out the room in preparation for the new baby. She reflects on the task and its larger implications:

Does it matter to leave a legacy? My mother, jokingly, always said she wanted her endless pile of laundry done before she died. My father wanted to be missed by my mother. Maybe all that mattered was the here and now. Nobody two hundred years in the future would care a whit about any of us. It was the reality of Vern’s age and the recognition that he wouldn’t live forever that was getting to me.

Fairley is forced to confront change and mortality amidst the joy of starting a family, and she looks back with the clarity of time. She adds, “Vern had contradictory impulses, as we all do, about whether to hang on or let go, preserve or move forward.” The dilemma is relatable, but it doesn’t make the choice any easier.

Shooting Out the Lights is Fairley's second book. I interviewed her about what it was like to write this story.

Q: Your memoir is set in Hillsboro, Ohio. How did you come to live in Ann Arbor?
A: My background was in art, and I had attended the University of Southern California. When my husband, Vern, died and my children were young—two and four—I exhibited more than 20 figure drawings of him in a joint show in Cincinnati. Friends seemed impressed by the work and encouraged me to attend graduate school. One of my favorite teachers at USC, Ruth Weisberg, had completed her undergraduate work at the University of Michigan. She encouraged me to apply there.

Q: You have an MFA in mixed media from the University of Michigan. What did that involve, and where did it lead you?
A: In graduate school, I created monumental collages dealing with Arctic exploration because I had a great aunt whose father had been to the Arctic in 1901, and the mysteries surrounding Arctic exploration had stirred my imagination. But whenever I showed my work, I was asked detailed questions about Arctic history. That’s when I decided I needed to write a book. So, in the early '90s, after finishing my graduate program, I began the research necessary to identify the photographs in my great aunt’s photograph collection. That led to my first book, Boreal Ties: Photographs and Two Diaries of the 1901 Peary Relief Expedition, published by the University of New Mexico Press.

Q: How did you later decide to write a memoir on the early days of your marriage, Stan’s long-term stay, and the tragedy of Ben’s death?
A: When my two kids were in college, they began asking questions about their father. I had dozens of files of their father’s notes, newspaper clippings, comics, and jokes. There were so many stories that it was difficult to know where to begin. I decided to start by writing about our first year of marriage. In the process, I realized the story about Stanislaus could be a book in itself. Vern had struggled to cope with the grief from the accidental death of his son, and Stan’s visit played a part in Vern’s healing. Our experience with Stanislaus seemed like the logical place to begin in writing this memoir.

Q: The dialogue in the book was my favorite part. Vern’s quotes, Stan’s denials, and Ann’s encouragements all revealed their personalities and made for engaging scenes. Was it easy to remember conversations and channel their voices?
A: Thank you. The easiest for me was remembering conversations with Vern and my parents because I have their voices in my head. Remembering conversations with Ann and Stan was a little more difficult but, fortunately, at least with Ann, I could pick up the phone and speak to her, which jogged my memory.

Q: When it becomes clear that Stan might stay indefinitely, you—Kim—take a stand to show Vern your disagreement. How did you piece together how it all happens? Is it based on memories, or did you consult old journals, calendars, etc.?
A: I remembered most of the story clearly, but I did create a timeline before I started writing. I used old calendars and check stubs to make sure I had the proper dates, and if I couldn’t find a date for a memory, I researched it. For instance, there is a moment in the book when Vern mentioned it was the anniversary of his first marriage. I remembered the moment, but not the exact date. Those kinds of details were necessary to fact check.

Q: Stan’s antics are shocking, and also funny at times. The bubble gum stuck under tables is one thing, and his violent streak is another. Despite his faults, do you think it was ultimately good that Stan’s presence forced the newlyweds to confront certain topics?
A: Absolutely. We had all become isolated in our ways. Vern was isolated in his silence about his son’s death. Stan was isolated due to his lifestyle and grief in dealing with his father’s death, and I was isolated by the ghosts of my past, namely having to be a caretaker to my younger siblings when I was a child myself. Stan’s presence forced Vern and me to hold a mirror up to our marriage. This ultimately helped in our healing.

Q: Tell us how you chose the title, Shooting Out the Lights.
A: The title refers, in part, to Vern’s son’s death, which was an accidental shooting. But it also refers to an essay by Don Marquis that was a favorite of Vern’s, called "The Almost Perfect State." In it, Marquis writes about how as a young man he followed the rules and did what he was supposed to. But in his future, between the ages of 92 and 102, he planned to sit in front of the fire with his feet in a bucket of warm water. He would have a revolver strapped to the arm of his wheelchair, and he planned to shoot out the lights when he wanted to go to sleep. Vern often would tell me to reread the essay, as if reminding me not to take things so seriously. In his stubbornness about keeping Stanislaus, I began to see that Vern was shooting out the lights himself.

Q: What’s on your nightstand to read?
A: Right now, I’m reading Billie Jean King’s new book titled All In: An Autobiography and Jill Smolowe’s memoir called Four Funerals and a Wedding. For my book club, I’m reading The Overstory: A Novel by Richard Powers. All three books are very different, but I’m enjoying all of them.

Q: Shooting Out the Lights is your second book. What’s next for you?
A: For the past 12 years, I’ve worked on two memoirs. The first was Shooting Out the Lights. The second memoir, about my swimming during the early years of Title IX, is my capstone project. I feel as if I’ve been writing it for 40 years. In fact, I have former teammates who have been hearing about it for so long that they’ve joked that I’d better finish soon or we’ll all be dead. Swimming for My Life will be out on October 11, 2022.