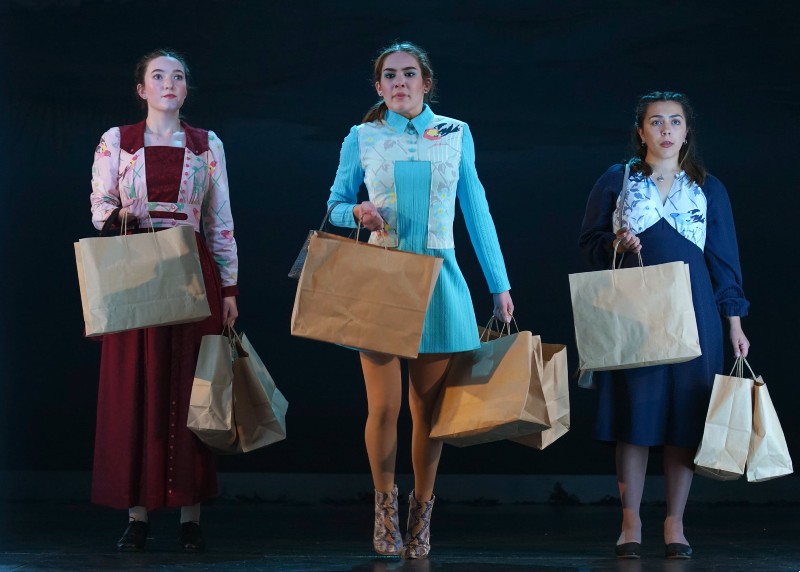 Smith achieves this by way of three actresses—Alyssa Melani, Ruby Sevcik, Ruby Pérez—who shift between playing their respective Nora and, in other time periods, Nora’s friend, Christine. Meanwhile, Thomas (Erik Dagoberg), Nora’s husband, moves seamlessly between eras, as does Daniel (Jalen Steudle), a family friend who harbors a secret crush on Nora; and Nathan (Chris Jensen), a desperate widower threatening to reveal Nora’s secret if she can’t save his job.

Because of the play’s fluid, sometimes rapid-fire shifts in time, Malcolm Tulip is as much a choreographer as director of Nora. The actors’ movements in the space, aided by small costume changes, clarify the action impeccably, making what could potentially be a muddle a moving, powerful theater experience.

Indeed, at the crisis point from Ibsen’s original play—when Nora’s husband holds in his hands a letter with the details of her “crime,” and Nora suddenly, furiously dances for him to delay this now-inevitable revelation—Tulip blocks his three Noras in a diagonal across the stage, not so much dancing as desperately trying to escape the bounds of her body, her place, her life.

And while watching, I winced and thought, “Every woman I know has felt this way.”

The pivotal moment unfolds against a spare backdrop, provided by scenic designer Monika Essen. Three staggered (but concentric, from the front view), forward-leaning, lit-up frames, like increasingly bigger doorways, stand at the back of the action—and those familiar with Ibsen’s original work will understand the importance of a door to the play’s famous conclusion—while a couple of unassuming, non-specific-era chairs and a desk stand in the corners of the Nora and Thomas’ confined domestic space.

And there is a fitting, deliberate sense of claustrophobia since all three Noras play out their story within the same space. Melani, as the 1918 Nora, is bright-eyed and self-consciously cheerful, sneaking sugar as a treat while urgently fighting to maintain the life that traps her, but also provides one of the only ways a woman of that era could survive. Sevcik, as the 1968 Nora, is more nervous and shy, popping pills while cautiously questioning her sexuality. And Pérez, the 2018 Nora, uses alcohol as her buffer-of-choice, and though more clear-eyed about the world than her antecedents, she cringes at having to debase herself (yet again) to keep the domestic structure that robs her of all real power intact.

Sarah M. Oliver’s costumes for the Noras stylistically cue us in to each period while employing distinctive colors for differentiation, and two of the dresses even visually echo the doorways within their design. Meanwhile, the male actors—who impressively maintain a consistency despite their characters’ many time leaps—are dressed in business attire that is timeless enough to work in each scenario. Lighting designer Harrison Hoffert and sound designers Henry Reynolds and Abi Farnsworth effectively build tension in moments when Nora’s hard-won peace is threatened, using rhythmic noises like a giant’s slow-approaching steps and lightning flashes of anxiety.

Given my own vantage point, as a feminist who’s also a wife and mother, I found myself utterly engrossed and profoundly moved by Nora (run time, two hours and fifteen minutes). As Thomas’ nearly-constant references to money stack up—early on, when 2018 Nora won’t let him peek at a Christmas gift she’s purchased, he teasingly says something like, “Even though you bought it with my money?”—the central role currency plays within family structures is made harrowingly visible. Though it makes us uncomfortable to talk about it, it’s an inconvenient truth that patriarchal and economic structures work in tandem to keep women in the exact same place where they started, despite seemingly encouraging advances like voting rights, the pill, and #MeToo.

So while it’s riveting to see a brutally honest exploration of this issue on stage, I also grew angry and sad by the play’s end that in all likelihood, things won’t be any different for 2068 Nora.

But good on Stef Smith for getting us to think and talk more about this not-at-all-solved issue now.

"Nora" continues October 7 through 10 at the Henry Miller Theatre on the University of Michigan's North Campus. Visit tickets.smtd.umich.edu for tickets and more info.