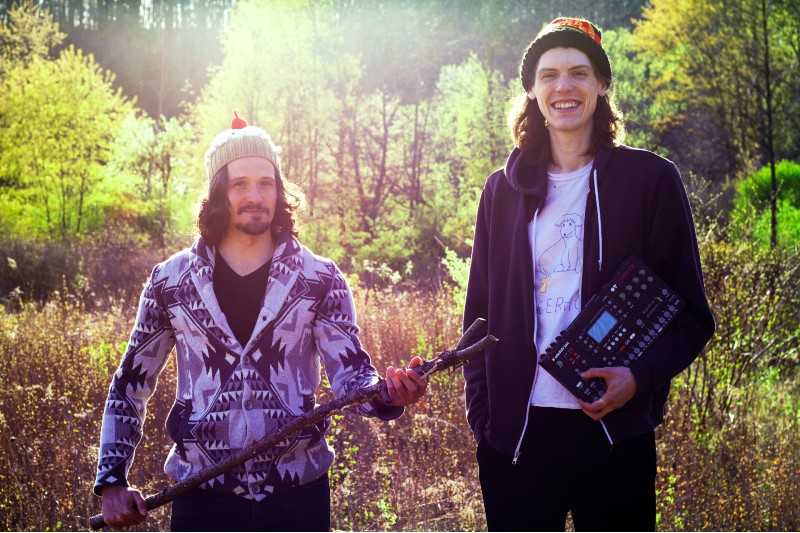 “As [David] tells it, writing these [songs] was his way of coping with all the stress around the pandemic, the election, and everything feeling like it was coming unglued," Skib said. "Our goal was to work quickly, follow our first instincts as much as possible, and not second-guess ourselves.

“I think that being able to trust your instincts and listen to your gut are incredibly important skills to have in life as well as music and especially when you’re surrounded by uncertainty. I certainly do hope it inspires others to rediscover themselves and reconnect with others.”

Together, Minnix and Skib rediscover their sense of purpose on the dreamy acoustic-electro ballad “In the Sand a Bird Cries Out.” The track soars as Mirror Monster embraces mortality and relishes becoming one with nature while Minnix sings, “To be born, limbs gone bony / My skin becomes a shore / It’s waited too long / It’s waited all my life.”

“My partner and I were taking a weekend trip up to Sleeping Bear Dunes. We were hiking around and discovered this bird skeleton," Minnix said. "The imagery is all taken from wondering about all of the physical and ecological processes that happen when we die. I hope that it comes across as kind of curious and not totally gloomy."

Mirror Monster continues its Pretty Things Made With All Our Love journey beyond the natural world on “Contact,” which features a haunting, sci-fi narrative perfectly suited for The X-Files.

The cinematic, uplifting EDM track follows a mystical light beaming from the heavens on a dark, solitary night as Skib sings, “Memories, growing stronger in my mind / Like the light that shines within me / Through the leaves, that glimmer brightens / As if to show me the way.”

“I took that feeling of being isolated in the dark, but I wanted to make it more hopeful by creating this mysterious light for myself to follow out of the darkness,” Skib said. “I shared the lyrics with David to ask for his feedback and his immediate response was, ‘Oh, it sounds like an alien abduction to me,’ which I love. We’re both pretty big nerds, so we if we can lean into science fiction, that’s definitely a plus.”

Mirror Monster then shifts its attention to ghosts of the past on the breathtaking, somber title track.

Pensive acoustic guitars provide the sonic foundation for Minnix to recall cherished memories of a college friend who passed away: “It’s only retinal flutter / What’s written on her shoulder / The naked brass / The laughter past / The photograph.”

“The song is written about a friend who died in an accident during my senior year of college," said Minnix, who met Skib at Earlham College in Richmond, Indiana. "Before her death, she lived in this campus house with basically all of my other close friends. After the accident, the house became an important gathering point while we all weathered out the rest of the year together.

“During a college reunion, we went back there and found that the house had been sitting empty and looked just like it did when we left on graduation day. It was this really uncanny experience, and I think I’ve been trying to write about that ever since.”

Minnix and Skib started writing tracks for Pretty Things Made With All Our Love last fall via remote collaboration and built layers of electronic sounds atop initial acoustic-guitar sketches.

A slight departure from 2020’s synth-heavy Free From All the Walls EP, the duo’s latest release ventures in a “folkier direction” due to its extensive acoustic-electro soundscapes.

“Our preferred process is to compose side by side in the studio, but early in the pandemic that was really impossible to do safely," Minnix said. "Since we couldn’t get together in person for most of the writing process, we would work by sending scraps of songs back and forth and layering parts on top.

“This EP was the first time we did all the recording, mixing, and mastering ourselves, which was an interesting and rewarding learning experience.”

Outside of writing and recording their own material, Mirror Monster also remixes tracks for other local artists, including Dani Darling. They recently added an electrifying, echoey feel to Darling’s soulful, jazzy track, “The Future” and plan to share new remixes for The Dropout and Oren Levin soon.

“I’m a big fan of Dani’s dreamy sound, and so I reached out to her about working together," Skib said. "Fortunately for us, she was receptive to the idea and asked us to remix ‘The Future.’

“She gave us a sense of direction to pursue, some key words, and a general style she was looking for but left it pretty open-ended. We worked on it and off for a little over a month with the goal of giving it a sunny, energetic house-music vibe.”

With two releases and several remix projects in the works, Mirror Monster continues to write and record new material. The duo has planted the seeds for two future EPs, one that’s influenced by video game chiptune music and another that features a retro synthwave style.

“The idea is to create something that could be the soundtrack to a video game that doesn’t exist," Skib said. "The plan is to create a plot for a video game and then basically treat it as though we’re writing the score to match up with the plot of the game.

“We’ve tentatively titled the second EP You Can Find Us on the Internet. It will likely be more electronic and less experimental than our previous EP, but it will still contain a lot of stylistic crossover, I imagine, since that’s become such a part of how we work together.”