Ann Arbor writer Zilka Joseph shares two poems and an excerpt from her new book, "In Our Beautiful Bones" 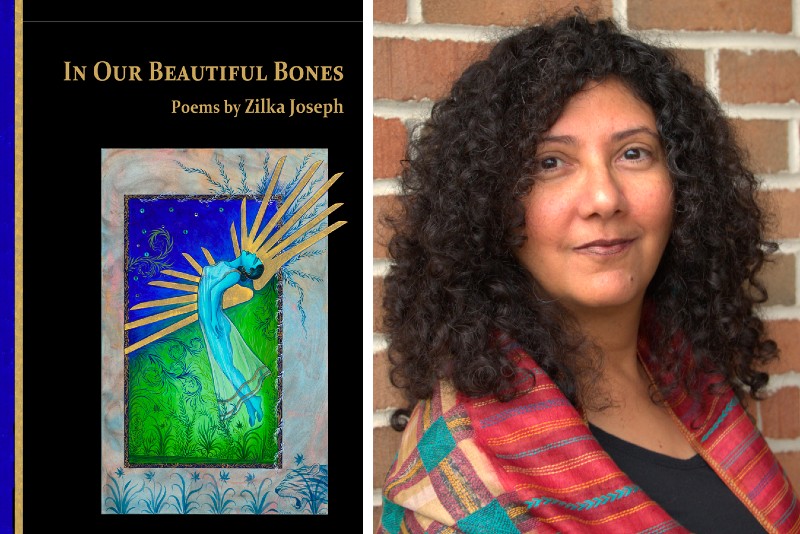 Zilka Joseph resides in Ann Arbor, but the poet's work is inspired by her Indian and Bene Israel roots and traversing Eastern and Western cultures.

Her latest book, In Our Beautiful Bones, was published this fall by Mayapple Press. It was nominated for a PEN America award and a Pushcart, and it's been entered for a Michigan Notable Book award:

In Our Beautiful Bones traces various stages in the poet’s journey as an immigrant from India who makes a new life in the US, and her encounters with racism and otherness. In it she explores her Bene Israel roots, the origins of her ancestors, her life in Kolkata, the influences of British rule and a missionary education, her growing knowledge of what racism and marginalization means, how Indians and Indian culture is perceived and represented. While delving unflinchingly into the violence and global impact of colonialism, the weaponization of the English Language, the evils of tyranny and white supremacy, and the struggles of oppressed peoples everywhere, she creates powerful collages from mythology, folklore, fairy tales, Scripture, world cultures, literature, music, food, and current events. Traditional and experimental forms, historical information, sensory riches, wit and word play, and an unwavering and clear voice make this book a compelling read. In Our Beautiful Bones is a multi-layered, sharply ironic and sometimes pathos-filled critique of the world, and at the same time it is visionary and a triumph of the human spirit.

We asked Joseph if we could publish a poem from In Our Beautiful Bones and she was kind enough to send us two poems and "two short extracts from a long and significant collage poem. I chose these three as I think they offer a glimpse of various complex aspects of my book," she said in an email.

Also, Joseph spoke with Nancy Naomi Carlson and Nawaaz Ahmed (who we interviewed recently) about In Our Beautiful Bones on October 6 as part of Literati's At Home series and we've included that video below as well as three previous Pulp pieces on the poet.

--The Upanisads explain how wisdom can be absorbed through sound, how the ear is a vessel –the receiver of divine messages

The lightning fell, and I only knew
that it entered my eyes, and thunder
repeated words in my ears
I could not understand

in the grey-blue light of evening.
A sheet of silver drew itself
like a shroud over my car –

its engine an animal thrashing
in the hold, my heartbeat
like oars slamming hard

against every climbing wave,
my hands on the steering wheel
clawing at it as if it were

a raft. At sixteen, my father sailed
the Bombay steamships, nearly
deafened by their sound;

when the sky was black and the water
black, and the sailor’s hearts
shrunk from fear –

all listening, on deck and on the bridge
and in the bowels
of the engine room,

to what the thunder said. And turning
into a vacant lot on Opdyke
near Pontiac, the storm

washed me clean
off the road. Wipers swept leaves
and yellow-black sky into sea

foam. I watched the windshield bulge
like a goatskin. It strained,
but held. Then a dam of white

light broke, the wall of water
shattering it’s cargo, and me
inside it like a seed

giving itself up to water
and to wind. In the west,
the sunlight crashing

in the broken branches
of oaks, burned a tunnel
of sienna through

which the bow
of my ship rose
to meet the horizon,

and my father, the Chief,
roared to his engineers,
their faces streaked with oil

the flailing vessel, and we turned
our faces to the upper
deck. Like our Jewish

ancestors wrecked on the
Konkan coast thousands
of years ago, we waited

but no calm came
until the wind suddenly
fell. My car almost shoved

on to its side, now only swayed,
a metal cradle
spat from the mouth

of thunder. I smelled its breath,

its teeth left bloodless marks
on my skin, my bones
shook, and though it was gone

I felt its pull, a lift,
a nameless terror,
and my deafened ears

what it had said
to my father
to his men

O Say Can You See

see this mouth it sings peace
in every language

study then the maps inside my eyes
see the world

yes feel my heartbeat
touch my human skin
it is real

but deliver yourself
from that dagger
the dagger you can become

Two excerpts from the collage poem “Whose Voices Were Heard”