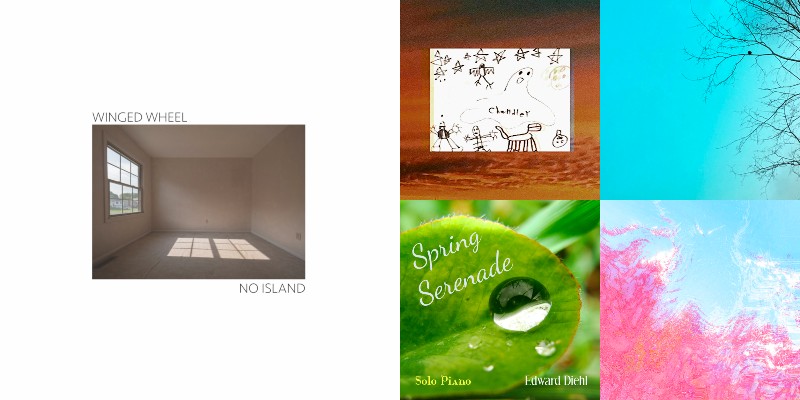 Winged Wheel, No Island
I'm thinking of changing the name of this column to the Friday Fred—such is the prolific output of Ypsi-Arbor musician Fred Thomas. His latest project is a collaboration with Cory Plump (Spray Paint, Rider/Horse), Whitney Johnson (Matchess), and Matthew Rolin (Powers/Rolin Duo), though Thomas doesn't pick up a guitar on the No Island album. He provided drum loops to the rest of the musicians, who live in Texas, Ohio, and Illinois, and they built the tracks up from there. Winged Wheel creates all sorts of cosmic jams on the record, including the first single, "Monsella," featuring Whitney Johnson on vocals. Recommended if you like 1970s German space rock—and Thomas' Hydropark.

Rebekah Faidia, "Songbird"
Over the past three years, this Ann Arbor singer has released an album, an EP, and several singles that mix folky songwriting with soul-pop sensibilities. But "Songbird" is the first tune that landed on my radar, thanks to an interview Rebekah Faidia did on Pulp contributor Lori Stratton's blog, The Stratton Playlist.

Edward Diehl, Spring Serenade
Ann Arbor's Edward Diehl describes himself as "a lifelong piano and guitar noodler and enjoys assembling
musical creations." Spring Serenade is an assemblage of 16 solo-piano tunes, 15 of which are originals. His lone cover is an arrangement of the holiday standard "Merry Gentleman," which probably was a fave when Diehl was honing all these mellow, classically influenced pieces while playing the lobby of the University of Michigan Hospital.

Ness Lake, Yard Sale (2021 Cleanout)
Ypsilanti one-man-band Ness Lake sounded like a bedroom-only project—lo-fi audio has been the norm throughout his numerous releases—but in recent months he's left the house for a few concerts in the Detroit area. That doesn't mean the indie-folk experimentalist updated his recording rig, though, and the eight-song odds 'n' sods collection Yard Sale (2021 Cleanout) still has the charmingly intimate sound—plus, the winsome songs—of his previous releases.