In Transition: Jeffry Chastang's “Under Ceege” explores tension, change, and stasis between a son, a mother, and her community 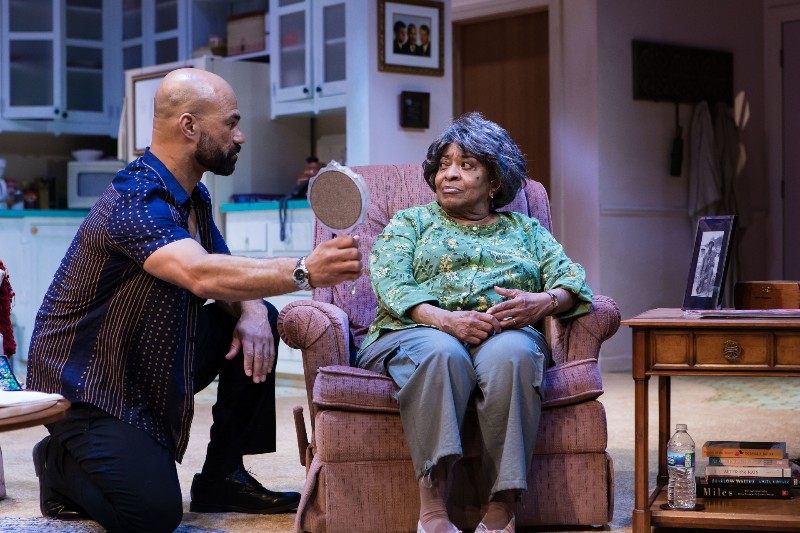 In June 2021, after the brutal murder of George Floyd and the emergence of the Black Lives Matter movement, many theater artists began to wonder if they had done enough to combat inequality. American Theatre published responses of a sampling of theaters across the country, and the magazine’s editor, Rob Weinert-Kendt, wrote that artists “must not let this moment of potential for change … pass us by.”

The Purple Rose Theatre Company felt the call of the times, too. While founder Jeff Daniels was on Broadway as Atticus Finch, a white lawyer who defended victims of prejudice in To Kill a Mockingbird, he wrote to the theater’s supporters expressing pride in the Rose’s diversity record: 30% of productions featured a person of color, Daniels reported. Seven productions centered on a diverse community, and four were written by playwrights of color. “But it’s not enough,” Daniels added.

So, the artistic director at the time, Guy Sanville, launched an initiative to seek out artists who are Black, Indigenous, or other people of color. The theater started holding acting auditions in Detroit as well as at its home in the mostly white city of Chelsea. Sanville appointed Lynch Travis, an African-American actor and director who had been part of the Rose company, to be the chief diversity enrichment advisor.

“When I was engaged by the Purple Rose to find more diverse voices to put on their stage, we invited 12 local playwrights,” says Travis. After Daniels and Sanville selected Jeffry Chastang’s Under Ceege, they asked Travis—who had been one of the first people to read the play—to direct it.

Travis had appeared in one of Chastang’s plays and had directed some informal readings of others at the Blackbird Theatre and at Theatre Nova. Also an actor, Chastang had appeared in plays with Travis, too. “We’ve known each other for the better part of 25 years,” notes Travis, who directed Sandra Love Aldridge and Jonathan West in Under Ceege, which has sets by Sarah Pearline, props and stage management by Danna Segrest, costumes by Suzanne Young, lighting by Noele Stollmack, and sound by Tom Whalen.

Under Ceege tells the story of Lucky, a 71-year-old woman, and Ceege, her 49-year-old son. “They’re definitely not the usual mother and son,” Chastang says, suggesting they’re more like battling siblings. “Ceege never referred to her as ‘Mom.’ He called his grandmother ‘Mama.’” And as his mother ages, their roles reverse. “’I wish you’d stop trying to raise me,’ she says. I know people like the characters. I grew up with them. They’re people in my family. They’re my neighbors.”

Lucky has lived in the same Detroit-area housing all her life. She was born there. She was married there. Her husband died there. When Lucky’s landlord dies, his heir wants to sell the property. “The play is about transitions,” Chastang says.

Will Lucky be forced out of her lifelong home, or will she find a way to buy it? And what of the relationship between mother and son? Will they be able to confront past tensions between them and come out OK? How will they approach the future?

“What attracts me to Jeff [Chastang’s] plays is that he has the ability to create people we all know, we all can relate to,” says Travis.

Chastang started writing plays when he was an undergraduate at Wayne State. He auditioned for plays in the theater department, and when he didn’t get cast, except as an understudy or in a studio student production, he thought, “I’m going to write a play, and I’m going to show them.”

It took a while. He tried his hand at screenwriting, and it didn’t lead him to Hollywood. So, 23 years after finishing college, he went back to school, for an MFA in playwriting at Ohio University (but he’s never stopped writing screenplays).

Soon, he was getting his work produced at top regional theaters, including Alabama Shakespeare, which commissioned him to write a play for the sesquicentennial of the Civil War. He won the 2016 Edgerton Foundation New Play Award, a Kennedy Center honor for a new play, and he was a finalist for a spot at the Eugene O’Neill Theatre Center’s Playwrights Conference, where some of the most important American playwrights have honed their craft.

Chastang currently lives in Wayne, “around the corner from the hospital where I was born.” He grew up in Inkster where his family lived since the 1920s—his uncle worked for Ford from 1923 until he retired in 1965. “He and my aunt moved from Georgia to Detroit before settling in Inkster. So many of the people with southern roots left the South for better opportunities or safety. They came up to Detroit or Chicago to try to make a better life,” he says.

And as the Rose goes about making an even better, even more diverse theater, it continues the mission to produce new works, a mission that was established by Daniels and artistic director emeritus Sanville early in the theater’s history. That means you probably won’t see last year’s Pulitzer Prize-winning play at the Rose—but you may see next year’s.

“That takes a little bit more time and a little bit more commitment [than doing established plays],” Travis reflects. He has his hands full reading dozens of plays by people of color, and he couldn’t be happier about that. “I’m ecstatic that the Purple Rose has set aside significant funds for this. We understand that it’s absolutely necessary to understand each other through art.”

Davi Napoleon is an Ann Arbor-based arts journalist. She did her undergraduate work at the University of Michigan and holds a doctorate in theater history, theory, and criticism from New York University.

“Under Ceege” is in previews until Jan 26 and opens Friday, January 28. It runs until March 12 at The Purple Rose Theatre Company, 137 Park Street, Chelsea, Michigan. Audience members must show proof of vaccination and photo ID and must wear masks. For tickets and further information, visit purplerosetheatre.org.