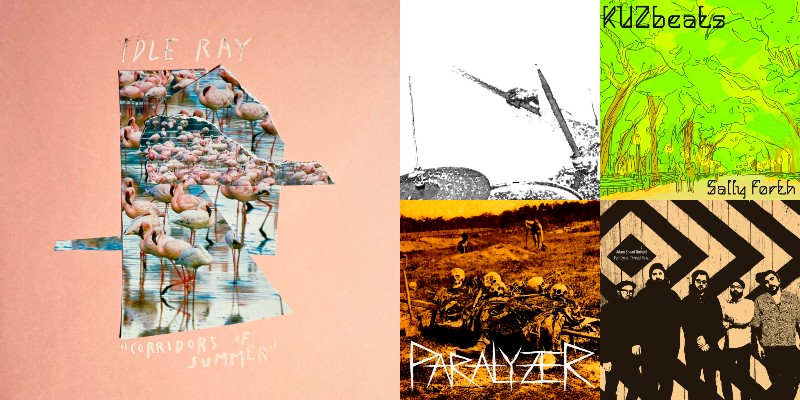 Idle Ray, "Corridors of Summer"
Now that Ypsilanti's Idle Ray has evolved from a Fred Thomas solo project to a working trio, the band's new single, "Corridors of Summer," features another member on lead vocals: Frances Ma, who is (was?) also the leader of the band Don't, sings the atmospheric, cavernous-sounding Thomas composition with a dreamy, distracted voice.

Adam Shead Quintet, Full Cycle, Thread New.
Drummer Adam Shead graduated from the University of Michigan a few years ago before returning to his native Chicago and forming several different projects, including this quintet. The group's new album was recorded live, and while it has plenty of free-jazz elements, Shead's avant-garde piece is a three-movement composition.

KUZbeats, "Sally Forth," "An Ocean's Patience," "Straight Gauge Boson"
Drummer and former Ghostly artist Michael Kuzmanovski (PostPrior) has released a steady stream of singles since dear leader, his November 2021 album debut as KUZbeats. If you were a fan of the Mo' Wax label and David Holmes in the 1990s, you'll find much to love about this Ann Arbor musician's cinematic, hip-hop-informed music. The cover art for "Sally Forth" was created by Ypsilanti's Thomas Dunn aka Cashmere Washington Band.

Corrupt Immortal, Expectorant EP
When I played "Observed From Above," the first track on Corrupt Immortal's new five-song EP, I thought to myself, "This sounds exactly like a track my friend sent me in the early days of the pandemic." Then it dawned on me: Corrupt Immortal is my friend. (Insert the "Roll Safe" meme here.) I shall let my Ann Arbor dude remain anonymous, but if you dig minimalist, outré-space electronica like I do, you'll find much to like on this EP.

Paralyzer, Paralyzer EP
I also recognized the music on the debut EP by Ann Arbor's Paralyzer because early versions of these tunes were also sent to me in year one of the pandemic by a friend (and fellow AADL employee), Matt Gauntlett, who plays guitar and bass on these instrumental thrash tunes alongside his longtime collaborator Justin Bean on drums. I've been mentally auditioning as their lead singer for nearly two years, but these vocals-free headbangers work great all on their own.