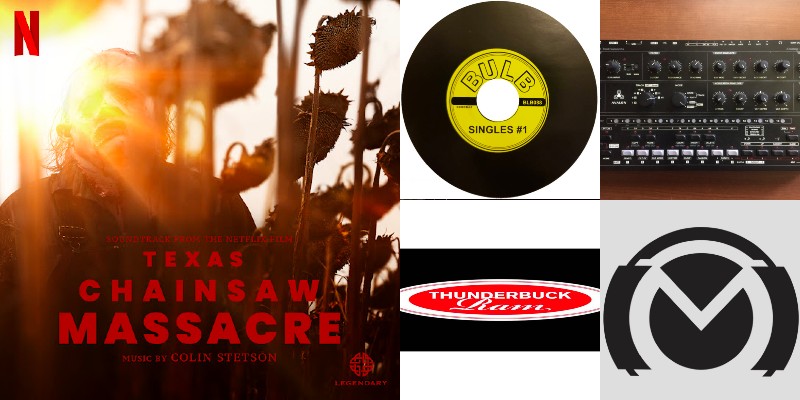 This week features a horror-movie soundtrack by Colin Stetson, an upbeat electronic album by MSD (Mike Dykehouse), a Bulb Records noise-rock compilation, wah-wah rock by Thunderbuck Ram, and a whole slew of techno and dance mixes by the MEMCO crew.

Colin Stetson, The Texas Chainsaw Massacre soundtrack
Pioneer High School and U-M grad Colin Stetson has made his name playing solo baritone saxophone using a variety of extended techniques that are as physically demanding to produce as they are astounding to hear. But the Montreal-based musician is making a career out of being a soundtrack composer for TV and film, and his latest work in this genre is for Netflix's new remake of the horror classic The Texas Chainsaw Massacre. The soundtrack has just as many jump scares as the film—listen with the lights on. (Read our April 2018 interview with Stetson before his return to Ann Arbor to perform his interpretation of Górecki's Third Symphony.)

MSD, Charlton Trax
I speak for the Washtenaw County music community—and electronic music fans around the world—when I say this new album by Michael Dykehouse—aka MSD—is loooooooong overdue. I don't mean it's something he announced and failed to complete; the record just showed up out of the blue. But Dykehouse has been releasing tantalizing snippets of music on his Instagram page for the past five years—and every track is a certified banger. Yet the Ann Arbor artist seemed reluctant to pull together the tunes into a proper release—or even turn the fragments into full-length pieces—despite EVERYONE begging him to do both of those things in the comments under every post. Charlton Trax displays Dykehouse's mastery of all genres of electronic music, from modular and techno to electro and house—the album even ends with an ambient track—and the record was well worth the wait. (Just don't make us wait again, Mike—your music is too good and your talent too large not to bless the world with it on the regular.)

Various artists, Bulb Singles #1
Ann Arbor's Bulb Records was the early 1990s brainchild of Jim Magus and Pete Larson, who performed as the noise-rock act Couch. The duo focused on releasing Michigan-based avant-garde sounds and Bulb was the early home of future alt and experimental stars Andrew W.K. and Wolf Eyes. Neither of those acts is on this compilation of Bulb's earliest 7-inch singles, but the 29 tracks featured display the manic chaos that garnered the label some solid buzz in the underground press.

Thunderbuck Ram, "Just a Girl I Know"
Ypsilanti's Thunderbuck Ram named itself after the 1970 Mott the Hoople song—which was so named after a Hoople read the words THUNDERBUCK RAM in a toilet stall and assumed it was the name of a local band. Circle of life. The strange thing is, Thunderbuck Ram's music, including this new wah-wah-soaked rock 'n' roller, actually sounds like that particular Hoople tune: funky and soulful (neo-classic) rock.

MEMCO mixes
Every other week I'm raving about a new mix from MEMCO, the Michigan Electronic Music Collective, and now I'm dropping four on you. Just listen to them as you prep to go to Club Heaven in Ann Arbor on Saturday, February 19, for MEMCO's Impulse 04: Roots live event featuring Matt Allen, Problematic Black Hottie, SABETYE, and Kilala on the ones and twos. MEMCO DJs and mixes also appear on WCBN-FM every Tuesday; here's the latest schedule for those shows.