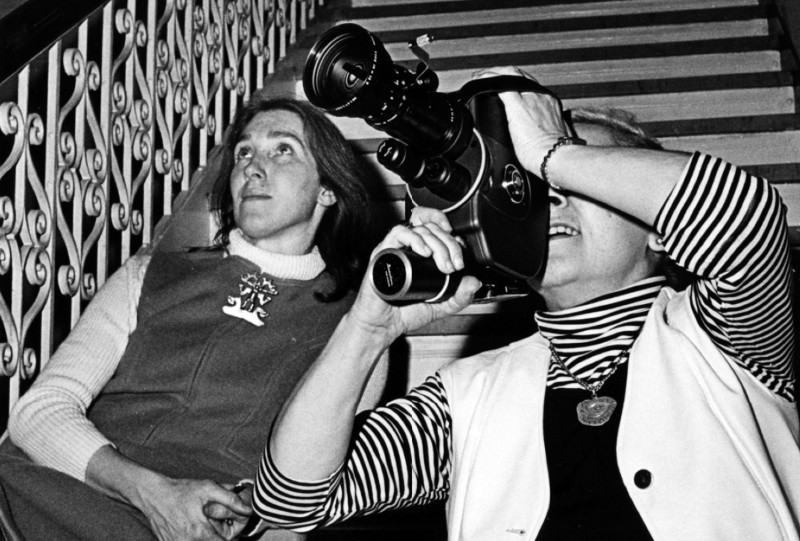 Maher’s approach is straight-ahead documentary, but within the film, she includes scenes from several avant-garde works along with interviews with filmmakers, critics, academics, and Dixon’s family members. Alexander Dixon, one of Dixon’s three sons, is the producer. His comments are among the most insightful.

In the 1960s, Dixon was a restless, unhappy mother of three sons. She had been given a movie camera by her then father-in-law and began making short movies that soon blossomed into lyrical abstract films.

Dixon and her husband divorced and she set off to redefine herself.

She became involved in the free-wheeling hippie-arts scene in New York City where she became immersed in the avant-garde film movement. She moved with her children to Pittsburgh where she began to work at the Carnegie Museums. It was there that she began to expand the museum’s film collection and provide a place to preserve and archive experimental films. She also pushed for the building of a theater to properly showcase the films she curated.

In a scene in the movie, Dixon introduces Brakhage at a museum screening and explains to the audience that the films they are about to see are far removed from Hollywood. They are deeply personal, abstract. Their meanings might be obscure, but like a piece of instrumental music, diverse elements combine to make a statement. These films are visual poetry.

She fought against censorship, provided temporary shelter for itinerant film makers and was, according to one friend, “like Mary Poppins” spreading the good word.

She carried on her mission by donating films to the Walker Museum in Minneapolis and working with the Bush Foundation in Houston.

The film concentrates on her devotion to film, but it also shows her as a mother and friend. Sadly, in her last years she had progressive Alzheimer’s disease, though often forcing herself to focus through the fog of lost memory.

"Experimental Curator: The Sally Dixon Story" will screen March 27 at 1 pm at the Michigan Theater and online starting March 22. Tickets are available here. Visit aafilmfest.org for the full schedule (March 22-27).