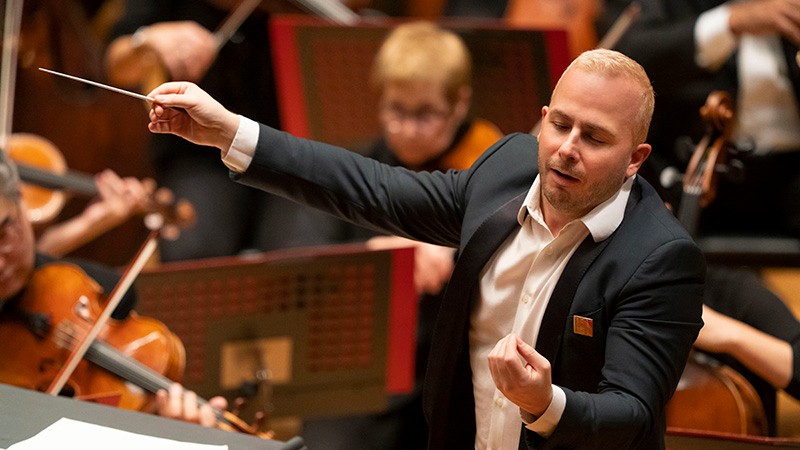 When Yannick Nézet-Séguin sprang onto the stage last Friday night at a packed Hill Auditorium, he was seemingly filled to the brim with energy. Though the Quebecois conductor and pianist is nearing 50, last weekend his every movement in front of the Philadelphia Orchestra seemed to be infused with a kind of youthful exuberance, from his stretch across the conductor’s podium to shake concertmaster David Kim’s hand prior to the performance, to the athletic exertions he subsequently made during the most bombastic moments of the evening’s program.

In recent years Nézet-Séguin has seen his star rise to new heights: While he may have been in Ann Arbor Friday night playing one of his principal roles as the leader of the Philadelphia Orchestra—where he has been music director for a decade—the 47-year-old also leads the country’s most prestigious opera company, New York’s Metropolitan Opera. The Canadian took on this latter role in 2018, two years earlier than scheduled, following the high-profile termination of his predecessor James Levine for sexual misconduct. Consequently, Nézet-Séguin has been forced to navigate the difficult path of rehabilitating the organization’s image at the same time as coping with the normal demands of keeping opera relevant in a changing world, including by championing new works. On top of all this, the conductor has been in demand as a guest conductor; just a few weeks ago he was called upon at the last minute to replace the Putin-aligned Valery Gergiev at the helm of the Vienna Philharmonic for three Carnegie Hall concerts amid outrage over Russia’s invasion of Ukraine.

Nézet-Séguin was joined onstage Friday by no less of a star, the orchestra’s principal tubist Carol Jantsch, who performed as soloist in the evening’s opening half, a new tuba concerto by Wynton Marsalis. Jantch is remarkable for a number of reasons beyond her technique and artistry, both of which are superb on their own. A University of Michigan graduate, Jantsch won her spot in the Philadelphia Orchestra during her senior year, an outstanding feat for any college student that was doubly remarkable because in doing so she became the first female principal tubist at any major orchestra in the country, breaking barriers in a musical subculture that has historically often been thought of as something of a boys club.

Both musicians, and the whole orchestra, performed convincingly in the first piece, Wynton Marsalis’s Tuba Concerto. Listeners might know Marsalis as a trumpeter and as the long-time director of Jazz at Lincoln Center, in which role he has appeared at UMS performances a number of times over the years, but he is also a skilled composer of classical music. Oftentimes Marsalis engages in a kind of hybridization of genre, blending elements of jazz or other African-American musical idioms into his notated works, firmly fitting him into a long American tradition practiced by composers such as William Grant Still or Florence Price.

Friday night’s concerto was commissioned by the orchestra, with Jantch in mind as the soloist from the inception of the piece. Like much of Marsalis’s other work, it drew heavily from jazz idioms, ranging from bebop melodies to boogaloo dance rhythms. The work is structured—somewhat unusually for a concerto—in four movements, “Up!,” “Boogaloo Americana,” “Lament,” and “In Bird’s Basement,” all of which allowed for Jantch to showcase her formidable artistry. From the jagged movements of the first movement to the grooving, jaunty rhythms of the second, the almost folk/spiritual tune of the third, to the rapidly rising scales of the final movement, the soloist dazzled with her athletic playing. Particularly compelling, to me at least, were the moments when Jantch made use of multiphonics, playing one note while singing another into the instrument, which created a kind of ethereal sound.

One challenge of the piece, however, came from the nature of a tuba concerto itself, namely the balance between the soloist and orchestra. No doubt a reason why so few tuba concertos have entered the repertoire, it was often difficult to pay attention to the soloist’s line while the rest of the ensemble was playing. Jantch produced a tone that was beautiful, round, and mellow, which meant that it was stunning on its own but that whenever another instrument entered with a more colorful or sparkling timbre the ear was quickly drawn away.

But it was the concert’s second half when the rest of the orchestra really shined, a superb performance of Brahms’s first symphony. The work is not played nearly frequently as the composer’s third or fourth compositions in the genre, perhaps because in this first attempt Brahms is quite audibly struggling to escape the shadow of Beethoven, but the Philadelphia Orchestra’s interpretation was polished and enthusiastic enough that the piece came across like one of Brahms’s later masterpieces. Nézet-Séguin began the piece at a quicker tempo than one typically hears, and from that moment to the last the conductor continuously infused the music with an energy that the piece often lacks. At one stupendous moment in the fourth movement, he let out an audible yell while cuing a fortissimo brass passage as his energy spilled over.

The concert Friday concluded in a light-hearted way. After the audience brought the performers back out for a third time during the standing ovation, Nézet-Séguin donned a backward U-M baseball cap, and Jantch dove into a virtuosic medley of Michigan school songs. The orchestra joined in for “Hail to the Victors,” and the audience sang along. 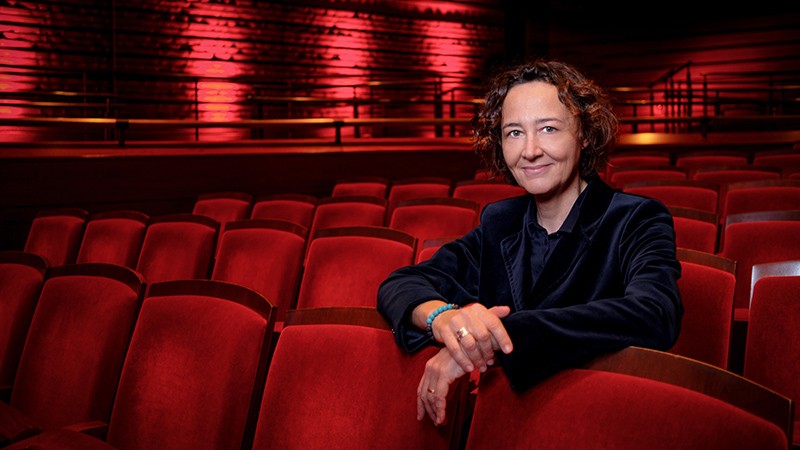 Saturday night’s concert was under a different baton, that of the orchestra’s principal guest conductor since last season, Nathalie Stutzmann, who proved to be something of a study in contrast with Nézet-Séguin. Compared with his often exuberant energy, Stutzmann’s movements felt restrained and deliberate. Throughout the night she demonstrated that too rare merit of knowing when to get out of the orchestra’s way, intervening only at moments she had a very clear vision that differed from the orchestra’s natural tendency.

Stutzmann began the concert with an intriguing programming choice that was compelling in its subversion of typical expectations for a concert opener, Missy Mazzoli’s “Sinfonia (for Orbiting Spheres),” a colorful, slowly shifting piece that rarely reaches the bombastic dynamic level typical of a concert opener. Like an orbit, the piece ends as it began, with a subtle blend of strings and harmonicas (one of the contemporary composer’s favorite tricks, yet one that continues to sound fresh).

Following the Mazzoli, the concert moved on to a capable rendition of Max Bruch’s “Violin Concerto No. 1” delivered by the concertmaster David Kim. Bruch’s concerto is a piece beloved by violinists, but its composer is virtually unknown outside of that work. Kim played with confidence and clarity, standing in a wide stance with his feet planted firmly on the floor, but never tipped over the edge into the swagger one frequently sees in concerto soloists, a refreshing change. It was also pleasant to see, both Saturday night and at the previous concert, that the orchestra drew from within its own ranks for concerto soloists rather than hiring an outsider for a one-off performance.

The evening concluded with the longest piece of the night, Schubert’s “Symphony No. 9,” often nicknamed “The Great.” While the orchestra played it impeccably, displaying phenomenal technique at numerous demanding passages, I nevertheless often felt my attention wandering, as the piece came across as overlong (a fault which, it must be said, lies with the composer rather than the orchestra). But the crowd seemed to disagree, and as the reverberation of the final chord rang throughout the hall the audience sprang to its feet for a standing ovation.

In all, the Philadelphia Orchestra lived up to its reputation as one of the leading ensembles in the country, and Ann Arbor would be lucky to see them return in a future season.

Dayton Hare is the editor of The Ann Arbor Observer's newsletter, a2view, and the former managing editor at The Michigan Daily. He earned a BM in music composition and BA in honors English at the University of Michigan.