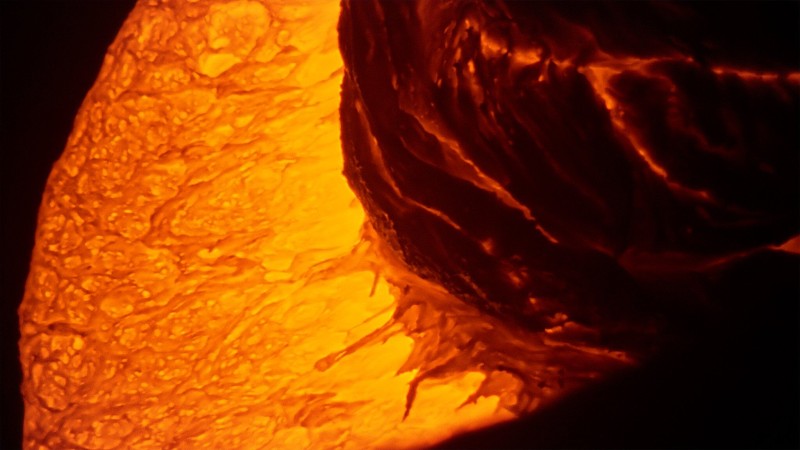 To underscore the physical and prehistoric source of the islands, the film begins with startling shots of lava flow reminiscent of Katia and Maurice Krafft. It’s a mesmerizing, beautiful scene that underscores to the viewer that they are never on stable ground while traversing the issues here. The unsettling drum machine and synth reinforce that feeling.

Navigation is one of the common threads running through many of the segments in the film. We are introduced to modern trans-Pacific voyagers and are invited to think about what it would mean to travel to another planet. That leads to images of telescopes aimed at the heavens looking for life, as well as the spiritual and cultural resistance to building the Thirty Meter Telescope atop Mauna Kea. Organizers liken the telescope to scientific colonization, another theme that runs through the movie.

In one scene, Dwayne "The Rock" Johnson is shown on a hotel TV as he prepares to film his movie The King, about King Kamehameha. He’s a Hollywood fixture, but also Samoan with ties to Hawaii. This kind of cultural navigation plays out several times in the movie.

What is colonization? What is Hawaiian?

Ultimately, like the last scene of the movie, Hawaiians must balance all of these influences, riding the crest of a wave to avoid falling.

"Rock Bottom Riser" will screen in competition at the Ann Arbor Film Festival on March 24 at 7 pm at the Michigan Theater, or online starting March 22. Tickets are available here. Visit aafilmfest.org for the full schedule (March 22-27).