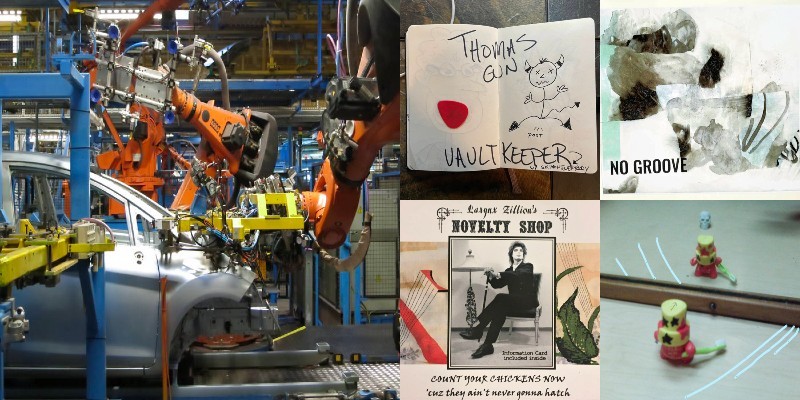 Doogatron, "Assembly Line"
Maybe there's been a guitar featured on a previous Doogatron track, but "Assembly Line" is the first song by this Ypsi techno group to feature one so prominently. The mix of electronics and a six-string evokes German krautrock and the 1970s work of Ash Ra Tempel leader Manuel Göttsching, but as you might be able to tell from the single's name and cover art, Detroit and techno are at the heart of "Assembly Line," which also has nods to Middle Eastern and industrial music.

Thomas Gun, "Vaultkeeper" b/w "Sk’mon Everybody" and Scatterbrain Demos
The first single from Thomas Gun's forthcoming album features a psychobilly-tinged punker on the A side and a cover of Eddie Cochran's 1958 classic "C’mon Everybody"—which was also originally released as a B side. (I thought maybe it'd be a ska version since Gun renamed it "Sk'mon Everybody," but there's no skank in this jank.) I'm not sure when the full album comes out, but this Ann Arbor multi-instrumentalist—he plays everything on these songs—released the acoustic Scatterbrain Demos EP in January, so perhaps that's a clue to the record's name.

Claire Cirocco & Fred Thomas, NO GROOVE
Between November 2020 and February 2021, Claire Cirocco from neo-no-wave band XV and Fred Thomas (Idle Ray, Saturday Looks Good to Me, etc.) exchanged bits of improvised music that were edited into the album NO GROOVE. The only non-improv tune—and the only one with vocals—features Cirocco singing a vocal-effects-laden version of Bridget St. John's 1971 folk song "City Crazy." I listened to NO GROOVE this morning on headphones while lying in bed. It was the perfect discordant-dream soundtrack to accompany my drifting between sleeping and waking, feeling just as woozy and loose as the music.

Larynx Zillion's Novelty Shop, COUNT YOUR CHICKENS NOW 'cuz they ain't never gonna hatch
As I mentioned last week when the Friday Five focuses on the Miller brothers, Laurence—aka Larynx Zillion—has an endless supply of music in his vaults from his various bands and projects over the past 50 years. Larynx Zillion's Novelty Shop was Miller's self-described avant-garde glam-pop band, and its revolving cast released numerous albums during its run in the 1990s. But this compilation covers the odds and sods from the group's tenure, including flexi discs, 45 rpm singles, and cassette tapes. Here's Miller's list of influences on the Novelty Shop: "Adam and the Ants, Killing Joke, The Crazy World of Arthur Brown, Alice Cooper (1st three LPs only) all with a touch of Don Van Vliet and Charles Ives."

cherry seasoning, angels
I can't find any info on who's behind this Ann Arbor project, whose new angels album came out on Michigan's Caffeine Free Records as did cherry seasoning's self-titled debut in 2021, which I described as "instrumental electro-pop that touches on dream-pop, vaporwave, and even some deep house." The angels album is in the same vein and equally as accomplished.