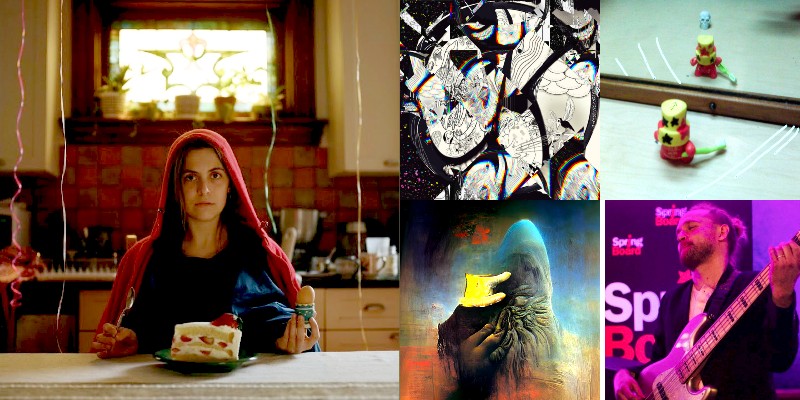 Lily Talmers, "My God, How Human" and "Maybe It's Madness" video
"My God, How Human" is the first single from Lily Talmers' forthcoming full-band album Hope Is the Whore I Go To, which will be released simultaneously with the solo record My Mortal Wound, whose first single / video is for the title track. It's an ambitious undertaking for an unsigned artist, and Talmers is raising money on Kickstarter to fund the physical products (CD and vinyl) and to pay the musicians who appear on the fully completed recordings. But Talmers is up to big tasks, having self-released her excellent debut LP, Remember Me as Holy, in 2021, the same year she graduated from the University of Michigan. While the simple categorization for Talmers is "singer-songwriter," her unique vocal phrasing, strong and elastic voice, artistic arranging, and poetic exploration of spirituality and humanity lift her music well above the coffeehouse circuit. She's also a terrific guitar player. Talmers' sound is closer to the art-folk/indie of Big Thief, Mary Margaret O'Hare, Tim Buckley, and Arthur Russell than to an artist who might appear at The Ark, but Emmylou Harris and Simon and Garfunkel fans will also find much to love about her music.

simulatent, "Simple Planning" and ResinDance
If I write, "simulant evokes isolationism," and you know what I mean, then you probably followed the ambient music revival in the 1990s. Isolationism was a description coined by critic Simon Reynolds and applied to the darker, industrial-leaning, often minimalist side of the genre, and Ypsilanti's simulatent clicks all the boxes on the December 2021 mini album ResinDance. The brand new single, "Simple Planning," adds slow-motion hip-hip beats and skittering percussive parts to the moody bed of sound, which recalls the work of Scorn and Actress.

Russell Tessier, Destiny's Playground
Bassist and Ann Arbor native Russell Tessier passed away from cancer in January 22, 2022, soon after he put the finishing touches on his final album, Destiny's Playground. Fans of jazz fusion and Jaco Pastorius—Tessier covers his "Three Views of a Secret" here—will find much to love on this funky seven-track album, which features a who's who of the Washtenaw County jazz scene. A compilation of more straightahead jazz featuring Tessier also came out recently, as I wrote about here.

COMFORT KIT, "Dead Intersection"
When this single started with a bass-line sample from the Seinfeld-theme riff, I didn't expect the song to morph into a flyin' the flannel punk rocker. According to the Bandcamp page, this Ann Arbor project is a "musical collective initiated by Adam from The Lowry Gang and Jimmy Tickles," and the duo has released an EP and four singles since its 2020 inception.