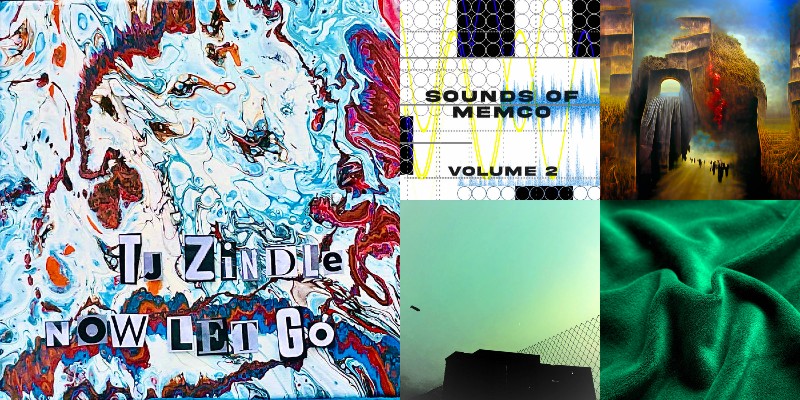 TJ Zindle, Now Let Go
As a guitarist and singer in Erin Zindle & The Ragbirds, Ann Arbor's TJ Zindle plays folky, world-music-influenced Americana. But his latest solo album, Now Let Go, recalls the anthemic sounds of 1990s alt-rock radio artists such as Better Than Ezra and Matchbox 20. Pulp contributor Lori Stratton has an expansive interview with Zindle discussing the record on The Stratton Setlist; check it out here.

Doogatron, "Stolen Velour" b/w "Bean Freak"
I thought I saw that Ypsi electronic trio Doogatron had a full-length album in the works—it would be the singles-prolific group's first since its 2018 self-titled debut—but for now, we'll have to content ourselves with this 21-minute two-tracker. According to the fellas, the A-side, "Stolen Velour," is the "spiritual sequel to our 2020 single 'Beaches'" and the B-side, "Bean Freak," is "one of our most epic peak hour techno tracks with time-stretched vocals that blend with synths punctured by spiking rhythms." I agree wholeheartedly with these two self-assessments.

TYRU$ARCHER, Poems
Ann Arbor rapper and producer TYRU$ARCHER is a terrific psychonaut exploring low-fi hip-hop freakiness. The eight untitled tracks on this full-length album are psychedelic in a minimalist way and low-key menacing like a nightmare. He also released a series of singles late last year in a similar vein.

Various artists, Sounds of MEMCO: Vol. 2
The Michigan Electronic Music Collective (MEMCO) is a terrific resource for U-M students wishing to learn how to DJ—or just to connect with fellow dance-floor afficianados. But in addition to all the parties MEMCO throws and the shows the DJs host on WCBN-FM, there's a social justice component that's just as integral to the group's identity. Sounds of MEMCO: Vol. 2 is a 15-track benefit comp for abortion rights featuring present and past members of the collective.

Paper Petals, all that lives forever
The Ann Arbor sound artist Paper Petals paints with tones you only hear fading in and out of sleep, like some distant transistor radio stuck between stations. "This album depicts the journey of a spirit through some form of the afterlife, from death, to something else," states Paper Petals on Bandcamp. "I view it as rooms of building, but whatever your vision for it, is correct. Beautiful, frightening, ethereal, haunting. I hope it makes you feel alive." This album is Paper Petals' second of 2022 to go along with two mini albums released in March.