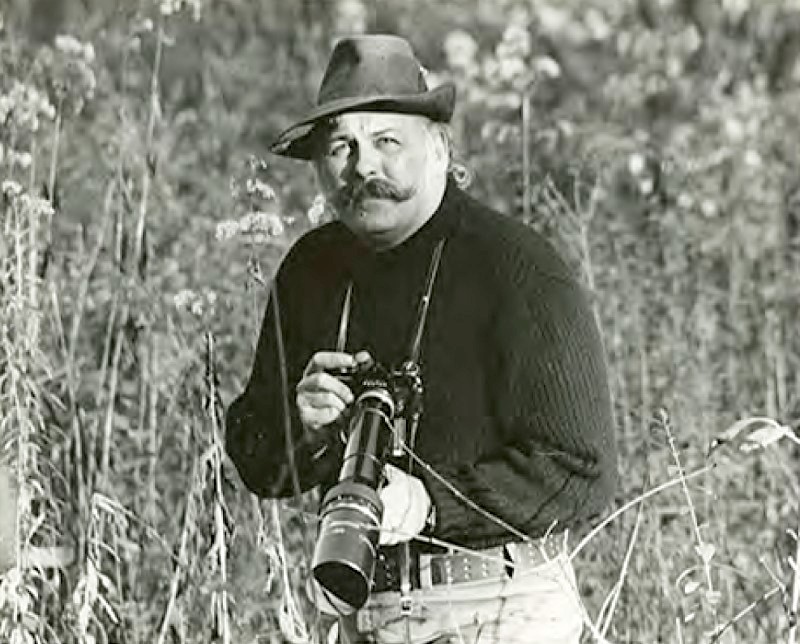 Before social media became the defacto visual archives of our times, newspapers employed a full complement of photographs to capture breaking news and everyday occurrences. It was through their lenses that history was recorded, from the significant to the mundane, with the photographers mixing a fine artist's attention to framing and detail along with a documentarian's eye and mentality toward preserving a fleeting moment for eternity.

Doug Fulton worked as a photographer and writer for The Ann Arbor News from 1954 to 1983. While he was a prolific photographic chronicler of our community—from Chrismas cookie making, neighborhood parades, and blues and rock concerts to structure fires, winter storms, and University of Michigan sporting events—he's also remembered for his column covering Michigan nature, parks, hunting, fishing, and the environment, which he illustrated with his photos.

The Ann Arbor District Library is the home for The Ann Arbor News' archives, and the Old News team at AADL culled through thousands of images to curate a new exhibit:

Capturing an Era: The Progressive Lens of Doug Fulton.

The exhibition is displayed on the second floor of AADL's downtown location from June 10 to September 5, and it features numerous Fulton photos and articles from throughout his 29-year-career at The Ann Arbor News. Additionally, two walls in the exhibit feature blues and nature photos provided to the library by Fulton's daughter Andrea and son Bruce.

You can read more about the exhibit and Fulton's life here, and you can browse all the photos in AADL's Old News archives here.

Then come back to Pulp and read my interview below with Andrea Fulton-Higgins about her father's background, how he came to learn photography in the Air Force, and his love of music and nature.

Q: I know your dad came to Ann Arbor to study at U-M, but tell us about where he grew up and his family.
A: Doug’s dad, Oscar, worked for the railroad. He also collected stamps and coins. Doug grew up an only child in Abington, Illinois. He spent a lot of time on his own exploring wherever he lived. I know they lived in Tennessee for a time, but then the railroad sent Oscar to Dunsmuir, California, near Mount Shasta when he was about 10.

Oscar caught brucellosis from drinking unpasteurized milk. His hair turned stark white overnight! He was in the hospital in San Francisco for six months and when he got out, the railroad sent him to Tucson, Arizona, for the dry climate. 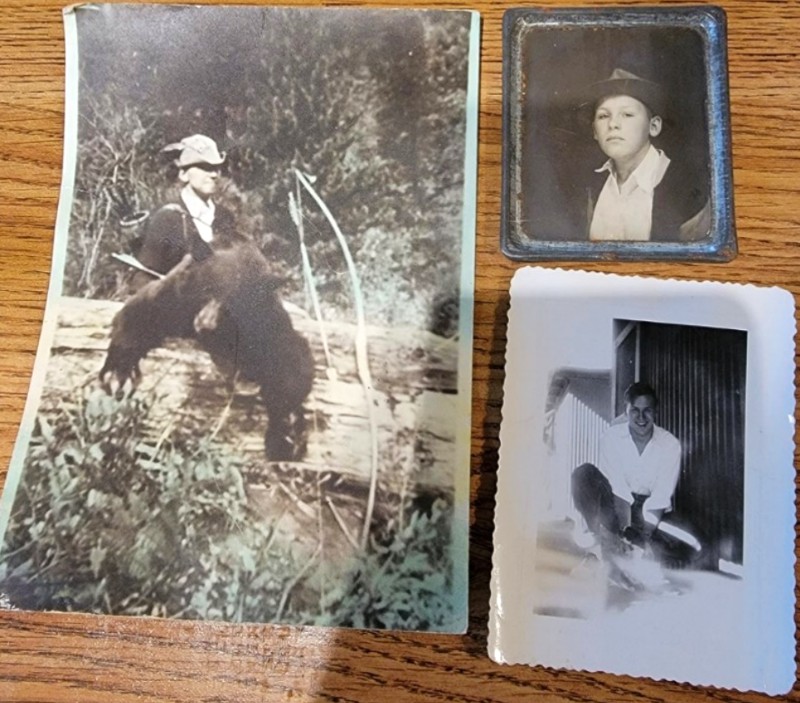 Clockwise from left: Unidentified friend with bear in Dunsmuir, California; Doug Fulton as a young boy and as a young adult. Photos courtesy of Andrea Fulton-Higgins.

Q: When did your dad's love of the outdoors start?
A: I know [Doug's] favorite author as a small child was [children's writer and conservationist] Thornton Burgess. [There's also] a well-worn book of his called Deep River Jim’s Wilderness Trail Book. These two authors as well as A Sand County Almanac by Aldo Leopold and Silent Spring by Rachel Carson were instrumental in inspiring Doug’s enthusiasm for the great outdoors. His turning to environmental and conservation/preservation actions into a lifelong career came later.

Though he was always into nature, I think he really became excited about the outdoors when he lived [in Tucson, Arizona]. I don’t know the story about the guy with the bow and arrow and the bear in the [above] photo, but Doug knew him in Dunsmuir. I bet he taught Dad a lot about the great outdoors. 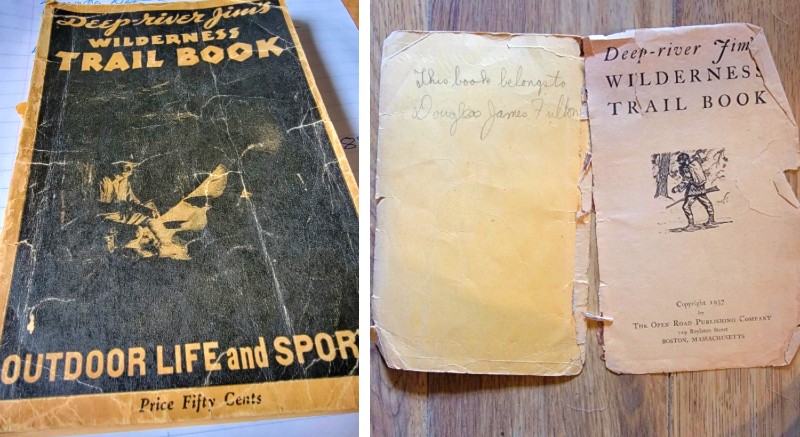 Q: How did your dad end up doing photography while in the Air Force?
A: After Doug was drafted, he spent time in D.C. doing a job he hated and got migraines. Spent time in Walter Reed [Army Medical Center]. At some point after that, he ended up at a base in upstate New York. His superior hated the heavy overcoats that covered up their spiffy uniforms so he ordered his men to forgo the bulky coat. Dad caught pneumonia. So, he missed his chance to go to the [Defense Language Institute] in Monterey, California, and they sent him to Fort Carson in Colorado.

Before he was drafted, he got his masters in linguistics in Chicago. That’s where he got his love for the blues. One can only imagine the acts he must have seen in the late '40s, early '50s!

[At Fort Carson] in Colorado, he heard that he wouldn’t have to go to Korea if he knew about photography. So … he said he did! Then went to the library and read everything he could about photography. They wanted him to take pictures from a small plane of possible sights that the enemy might choose to strike.

[Instead,] they went to the towns to train the local police on what to do if a strike in their town occurred. Sounds pretty lame if you ask me, but it kept him out of Korea!

When he was all done with that, he had every intention of continuing with his Ph.D. at the U of M, while mom thought she was going to have a nice quiet life with a professor [laughs]. He had to get a job to establish residency in Michigan for the University. He got a job painting houses, but it wasn’t steady enough. So he got a job as a stringer for the Ann Arbor News and he fell in love with the job! The rest is history. 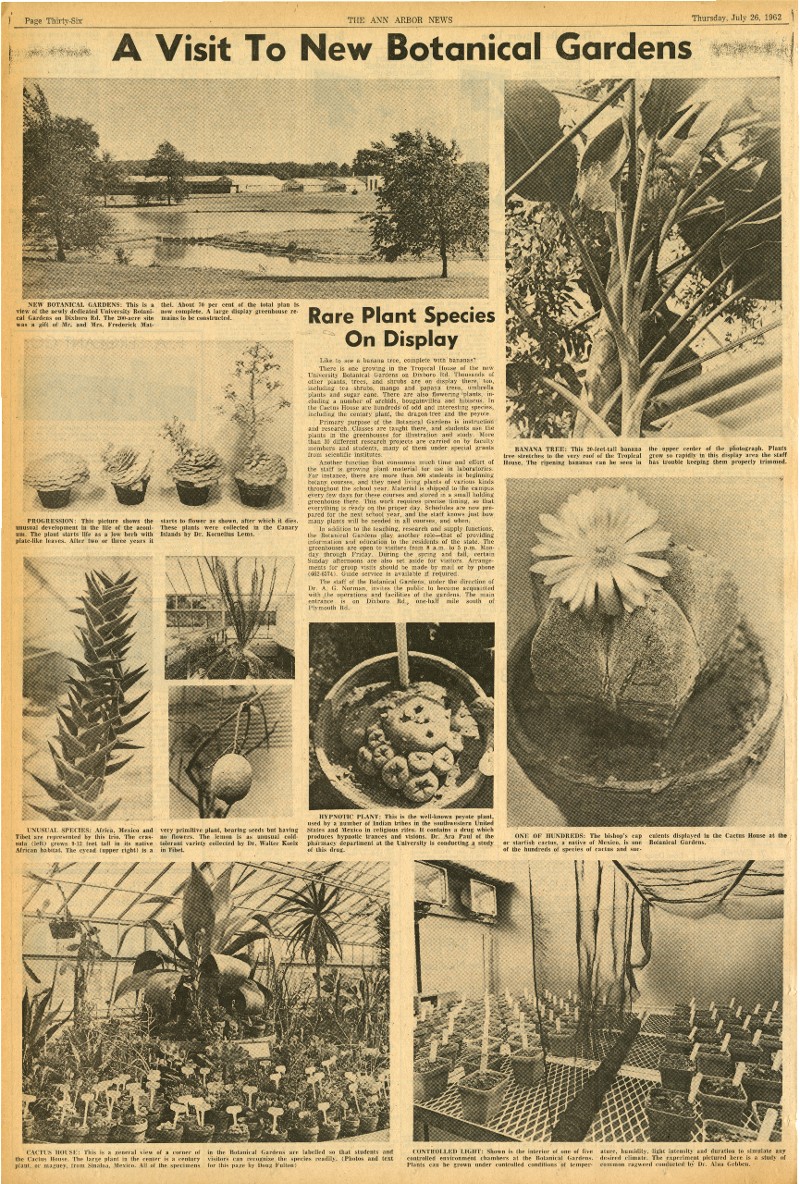 Doug Fulton's photos and prose on the opening of Matthaei Botanical Gardens in the July 26, 1962 edition of The Ann Arbor News.

Q: Do you know if the nature column he wrote was a personal favorite thing to do at the newspaper, or did he equally enjoy doing photography?
A: He loved the opportunity to communicate with the people about subjects he wanted them to get enthusiastic about. And he loved that he could use words AND pictures to give concise information about hunting, hiking, birdwatching, fishing, and the politics of it all. The conservation of our Earth and the groundbreaking legislation that he was involved in was at the forefront of a movement that was just beginning in earnest.

In the early '60s, he published a photo of a Michigan flower every week [in the Ann Arbor News] and told a little about it. It was wildly popular and soon after he was asked to be the new outdoor editor. He was President of the Audubon Society for a couple of years and we participated in the Christmas Bird Count every year. We went camping all the time. We had a VW camper bus from Germany that was so cool.

We had a fantastic trip across Isle Royle. I went nuts when I found what I thought was a diary of our trip, only to find that we took the trip because a company that made freeze-dried food wanted him to take a trip and write up reviews of their food [laughs]. At least the food was good! And free! 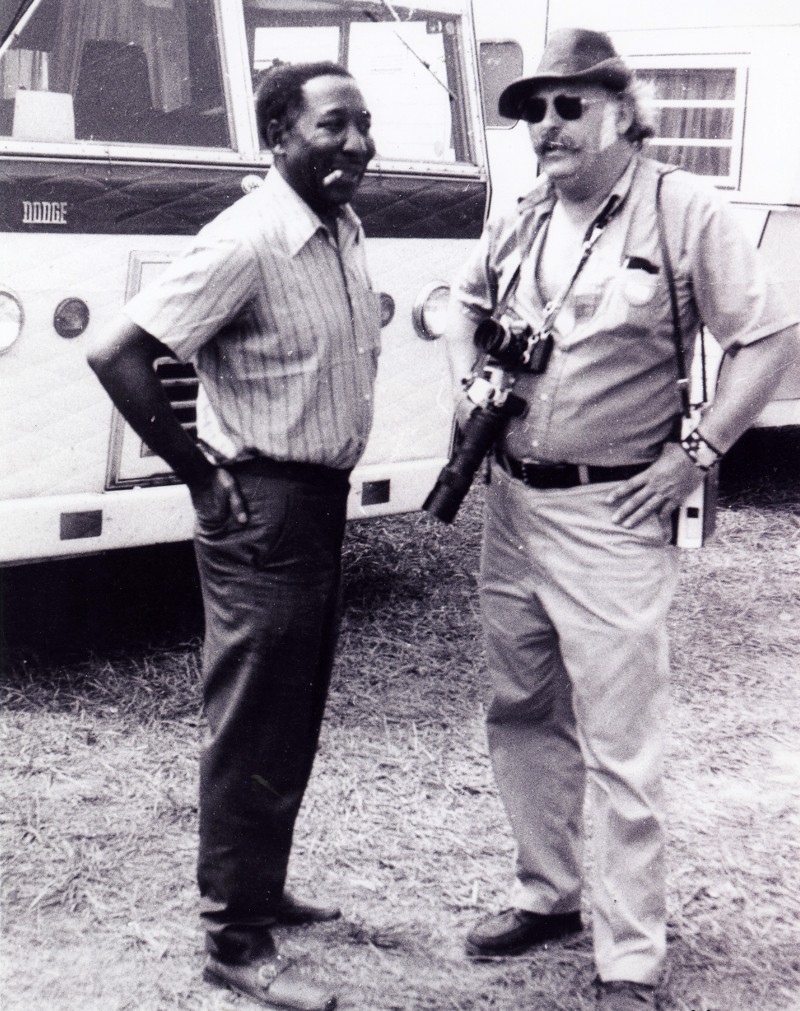 Q: There are a number of blues musician photos in the exhibit taken between 1969-1972, plus the Sippie Wallace shot from 1978, but I know your dad remained an avid listener his whole life, even after he moved from Michigan to Tucson, Arizona, when he retired. Did he photograph musicians in his spare time for fun?
A: All of Doug’s negatives—conservatively, perhaps, 10,000?—are at the Bentley Library [so there are musician photos in there]. In addition to the blues, he also photographed a lot at the A2 Free Concerts during that same time period. At some point, he started putting together a blues calendar every year and continued to do it from Tucson in conjunction with the Tucson Blues Society.

In addition to being the outdoor editor, he became special projects editor and had a picture page most every Sunday that covered anything of interest that was happening in A2 [including music events].

We had parties at our house all the time and he had a great collection of records. Bonnie Raitt, Junior Wells, Buddy Guy, and others have had BBQ at our house. Jim Tate and Bill Lynn from the Mojo Boogie Band would drop by to listen to blues with Doug. He was good friends with the owners of The Ark, and The Blind Pig became a favorite spot as well. And, of course, there was Mr. Flood’s Party and Mackinac Jacks among others that we all frequented in the '70s. He was never without his camera. He loved Muddy [Waters] and Buddy Guy and so many more. His pictures are featured in several books about the blues.

Q: What sorts of photos did your dad like taking the most? In addition to his nature work, he seemed to go out on a lot of human interest assignments more than breaking news?
A: He loved getting the shot that no one else saw. It wasn’t the subject so much as the situation he was able to capture. All of the awards he received speak to his ability to notice the unseen. To highlight the hidden—and to be invisible himself while doing it, which was a clever trick as he was six feet tall with a large build. He also took photos for The Ann Arbor News of football at The Big House and basketball at Yost where my mom would go with him and be his “spotter.” He was so excited to get his first long lens. I would see him on the field at The Big House and point to my friends, ”That’s my Dad!”

"Capturing an Era: The Progressive Lens of Doug Fulton" is at the Ann Arbor District Library, 343 South Fifth Avenue, second floor, from June 10 to September 5. Visit aadl.org/dougfulton for more Fulton photos as well as information on his life and work.