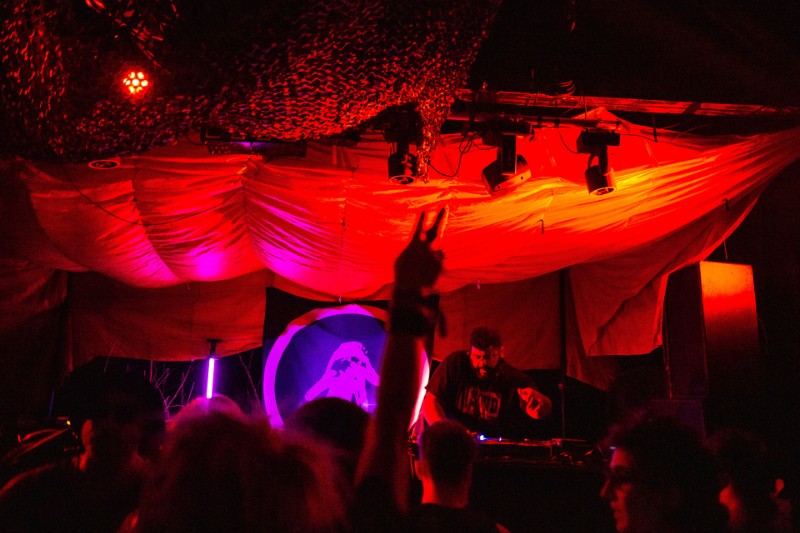 Carlos Souffront at Interdimensional Transmissions' No Way Back Party, May 26, 2022. Photo by Rosewyn Gold.

Resident Advisor, one of the most important websites covering electronic music, previewed Interdimensional Transmissions' annual No Way Back event as "the kind of party that can change your life if you let it."

Reading that, you might scoff, roll your eyes, and chalk it up as hyperbole.

That is until you go and experience the transformative power of No Way Back yourself, as I did on Sunday, May 26, at Detroit's Tangent Gallery.

The Interdimensional Transmissions (IT) record label was founded in 1995 by Brendan M. Gillen, aka BMG, and he was later joined by his long term collaborator, Erika Sherman (who performs under her first name). BMG and Erika are also partners in an electronic music duo Ectomorph, which Gillen founded in 1994, inspired by Detroit techno artists such as Drexicya and Robert Hood. The goal with Ectomoph, beginning with its first single in 1995, was to make Detroit music for Detroit, not for export to Germany and other places.

BMG and Erika have roots in Ann Arbor, too. Erika was a WCBN-FM program director and freeform jazz DJ. BMG was once WCBN's music director and the second host of the iconic electronic music show Crush Collision, which started in 1987 and is one of the longest-running electronic-music radio shows in the world. He modified the program into a space for the new industrial and techno sounds that were booming in Detroit, with a focus on “the sound of the underground.”

Erika and BMG have remained grounded in Detroit and loyal to its underground music makers for almost 30 years, and the No Way Back party is their way of continuing to give back to the community they love.

The first No Way Back was in 2007 and the goal was to “return to the source, to what inspired us in the first place.” Last year, due to the event being livestreamed instead of in person, it went for 30 hours, a considerable bump from the 12-hours it started with in 2007. This year's No Way Back was in person again and went for 14 hours, beginning at 10 pm and featuring 90-minute sets from 15 DJs, including BMG and Erika. 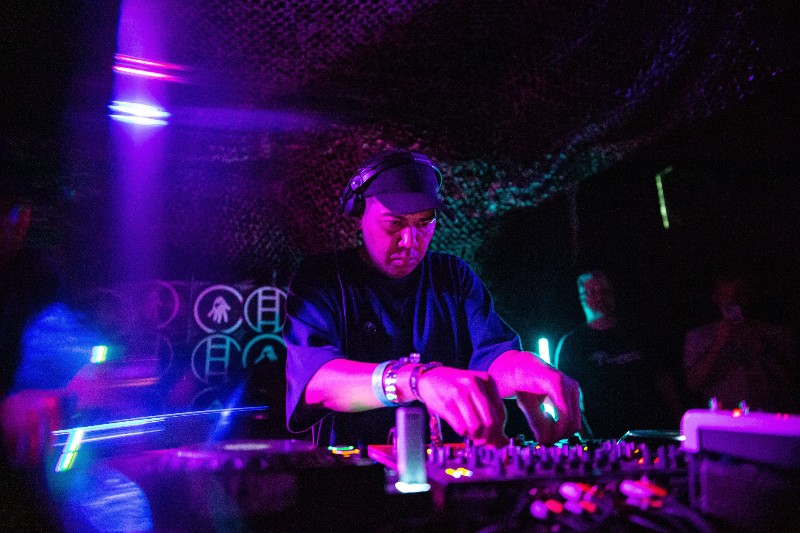 Mike Servito at Interdimensional Transmissions' No Way Back Party, May 26, 2022. Photo by Rosewyn Gold.

The event was sectioned into two spaces: the Outer Space Room and the No Way Back Room. The Outer Space Room is a space for experimental and ambient music, and it's where I spent the first hour of the night. Walking into a club to see mats on the ground and pillows for people to lie down or sit on is not typical these days, but it was a common sight at raves in the 1990s.

The Outer Space Room's night began with a sound bath from Wanjira Makena, which grounded and prepped everyone for a transformative evening, and the soothing vibes were especially welcomed by those who spent all day in heat dancing at the nearby Movement Festival, the legendary annual Detroit electronic music festival. Throughout the night, the Outer Space Room was a place to recharge your batteries before relaunching yourself into magical upbeat sounds in the No Way Back space.

Some of the highlights in the No Way Back Room were Eris Drew’s energetic vinyl set. There were no genre constrictions and she kept the crowd dancing for 90 straight minutes, building the heat to inferno-like levels. Carlos Souffront also held down a powerhouse set that left the room reveling in why they love this music in the first place. Mike Servito moved the crowd into the sunrise, which left the dancers feeling revived and transformed.

No Way Back was a treat for the eyes, too, thanks to the beautiful installation work of Amber Gillen. Parachutes hovered over the dance floor and gauzy, stringy material hung from the ceiling while tunnels lead you between the spaces and to the outside.

On its website, Interdimensional Transmissions characterizes the No Way Back party as "an eternal concept, we didn’t invent this, and the people who may think they did didn’t either, this is our cultural heritage from a time before history."

Music and community offer powerful transformative energies that humans can connect with when the conditions are right. No Way Back was the velvet hammer that allowed us all to tap into it.