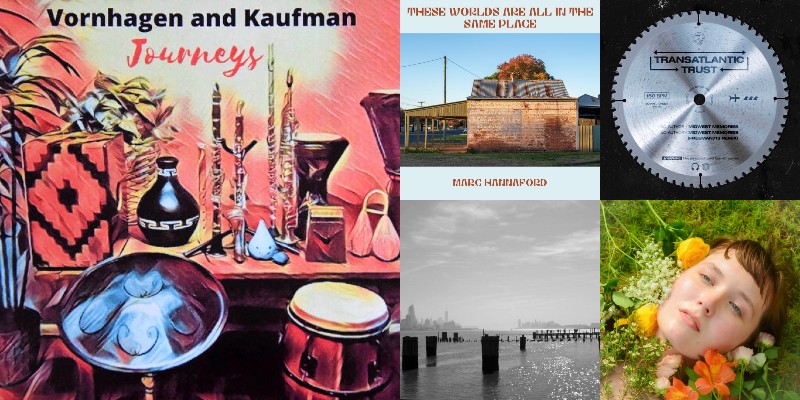 This week features worldly jazz by Vornhagen & Kaufman, ambient by Fred Moises, folk by Mary Collins, techno by No Author, and experimental jazz by Marc Hannaford.

Fred Moises, Crunching It
The photo Fred Moises uses on his Bandcamp page is that of a singer-songwriter holding an acoustic guitar and standing in front of a microphone on the stage of a club. But his new album, Crunching It, is total mediation music filled with drones and gently pulsating electronics. Total surprise—and totally lovely. The Ann Arbor-ite also recently posted the first eight songs from Fuzzy Moon, a 22-track concept album he's still working on that also seems to be largely instrumental.

Mary Collins, Preoccupations
Singer-songwriter Mary Collins was born and raised in Ann Arbor, but she recorded her new EP, Preoccupations, while attending New York University. If she comes back to town, she'd find a welcome home at The Ark for her literature folk-rock tunes.

No Author, "Midwest Memories"
No Author is one of the co-founders of Ann Arbor/Berlin electronic music label none/such, and his very 1990s sounding "Midwest Memories" single features a hard-techno beat along with a little bit of trance-inspired melody. But the B-side remix by Los Angeles' Freeman713 strips the song down to its industrial-techno essence.

Marc Hannaford, These Worlds Are All In The Same Place
Marc Hannaford is a native of Australia but he now lives in Ann Arbor by way of New York City. All of those places come together on the experimental-jazz pianist's new album, which was recorded live in Australia in 2019, featuring the NYC trio he formed in 2013, but not released until April of this year, after Hannaford had moved to Michigan. He cites Anthony Braxton, Henry Threadgill, Elliott Carter, and Geri Allen as some of the influences on his self-described "polyrhythmic, post-tonal compositions," which can also be purchased in PDF form here.

Vornhagen & Kaufman, Vornhagen & Kaufman
This duo album came out in 2018 on CD but just recently made its way to Bandcamp courtesy of longtime Ann Arbor saxophonist and flutist Paul Vornhagen. He's teamed here with percussionist and fellow Townie Aron Kaufman for 11 tracks of world-music-steeped rhythms, melodies, and meditations. The duo still plays together, too, as seen in the two sets of full-concert videos below, recorded March 12, 2022.