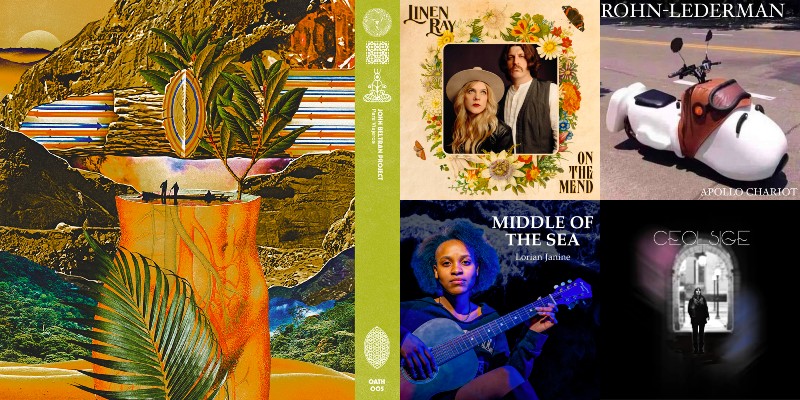 For nearly 30 years, Ann Arbor producer John Beltran has been cranking out dancefloor-filling techno anthems, mellow melodic trance, and ambient soundbaths, often featuring a world-music undercurrent no matter the genre. Below are four new releases—and a reissue of Indio—all made by or in partnership with Beltran, and all fit the aforementioned description. Am I being lazy? Maybe a li'l bit. Friyay, y'all. But there are only so many ways I can say that Beltran's joyful music is really consistent, really fab, and he's really good at his job, which you can tell he loves. Now, that's a compliment.

Lorian Janine, "Middle of the Sea"
This is the first release from The Amplify Fellowship's 2022 artists, both of whom were gifted studio time and support to create their music courtesy of Ypsilanti's Grove Studios and Ann Arbor's Leon Speakers. (Ki5 is the other artist this year; read more about the 2022 fellows here.) Lorian Janine is a Detroit-based singer-songwriter and her "Middle of the Sea" is an original Christian folk song where she not only sings and plays guitar, she accompanies on violin. I think she can play drums, too. Talent!

Linen Ray, On the Mend
In 2018, the married couple who are Linen Ray packed up the fam and left Ypsilanti for Nashville. They talked about the difficulties of uprooting and starting over with Pulp contributor Lori Stratton over on her blog, The Stratton Setlist, but one listen to Linen Ray's strong new country-folk-rock album, On the Mend, and you can tell the family made the right move—and the troubles they faced certainly inform the lyrics. Through trials comes inspiration.

Rohn - Lederman, Apollo Chariot
Venus Chariot is a heart-on-the-sleeve, industrial-tinged electronic pop album by Ann Arbor vocalist-keyboardist Emileigh Rohn and Belgian keyboardist-producer Jean-Marc Lederman that came out in September 2021. It's the type of record that easily could have been remixed for maximum danceflooroscity, but the duo went the opposite way with Apollo Chariot: the Venus Chariot songs are recast mostly as downtempo brooders, even coming across as singer-songwriter-y at times. It works, too, because Rohn's lyrics are raw and sad rather than rough and rowdy, more appropriate for solo headphone listens than dancing in a club with your besties.

Ceolsige, Ceolsige
Christopher is the English variant of the Greek name Christophorus, which means "writer of words about music" (or something like that). Ceolsige is the old English version of the popular modern-day name Kelsey, both of which probably mean "talented writer of words accompanied by music" (or something like that—please don't fact-check me today). The self-titled debut EP by this Ann Arbor singer-songwriter born Kelsey Detering features four fully realized tunes that are written, arranged, played, and sang with the sort of confidence and clarity you might here in a veteran performer, not necessarily someone who's still in college (I think at U-M). Ceolsige plays a free concert in Chelsea on June 23 and at Sonic Lunch on August 18. RIYL: Lucy Dacus, Snail Mail, and the more guitar-oriented songs of Taylor Swift.