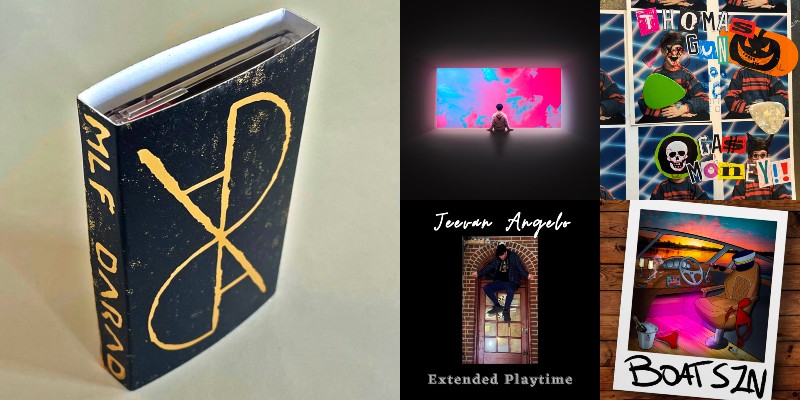 Modern Lady Fitness, DARAD EP
This is the third EP in what Ypsi trio Modern Lady Fitness is calling its Feast series. I recalled last December's
IWOWI EP and November 2019's RAWAR EP as being post-Feelies indie-rock. But after listening to DARAD and then relistening to the previous EPs, my brain locked into another potential influence: the icy early years of Factory Records where bands like The Wake, Crispy Ambulance, and early New Order played a kind of moody, spacious, punk-inspired, jangly art-rock. All three EPs were recorded by Fred Thomas and I want to imagine him channeling his inner Martin Hannett while documenting these sessions.

Thomas Gun, "Ga$ Money" b/w "Going Going Gone"
It's been a little over a month since his debut album, Ratbones, came out, but the one-man punk band is already back with a topical single. "Ga$ Money" is a revved-up rocker that would sit nicely on the album, and the B-side "Going Going Gone" could slot on the acoustic demos EP that Gun released in January.

Dave Menzo featuring Tiffadelic, "Boat SZN"
I haven't heard any music from longtime Ann Arbor singer-songwriter, producer, and soundman Dave Menzo since his 2015 album Shhh..., which was an electronic-leaning psych-pop album made entirely of instruments he checked out of the Ann Arbor District Library's Music Tools collection. That record in no way prepared me for "Boat SZN," a single that feels like Weird Al doing a Kid Rock parody—except I dunno if this is a parody. Listen for yourself—preferably on headphones as it's NSFW. (Maybe not even safe for headphones.)

Jeevan Angelo, Extended Playtime EP
Jeevan Angelo is another 16-year-old Ann Arbor-ite—and former Skyline student—who released a hip-hop EP this spring. Jeevan Angelo's Extended Playtime was recorded at the same place he goes to school now—at home—though he likes to get inspiration while freestyling with friends while hanging in A2, according to this MLive interview with him.