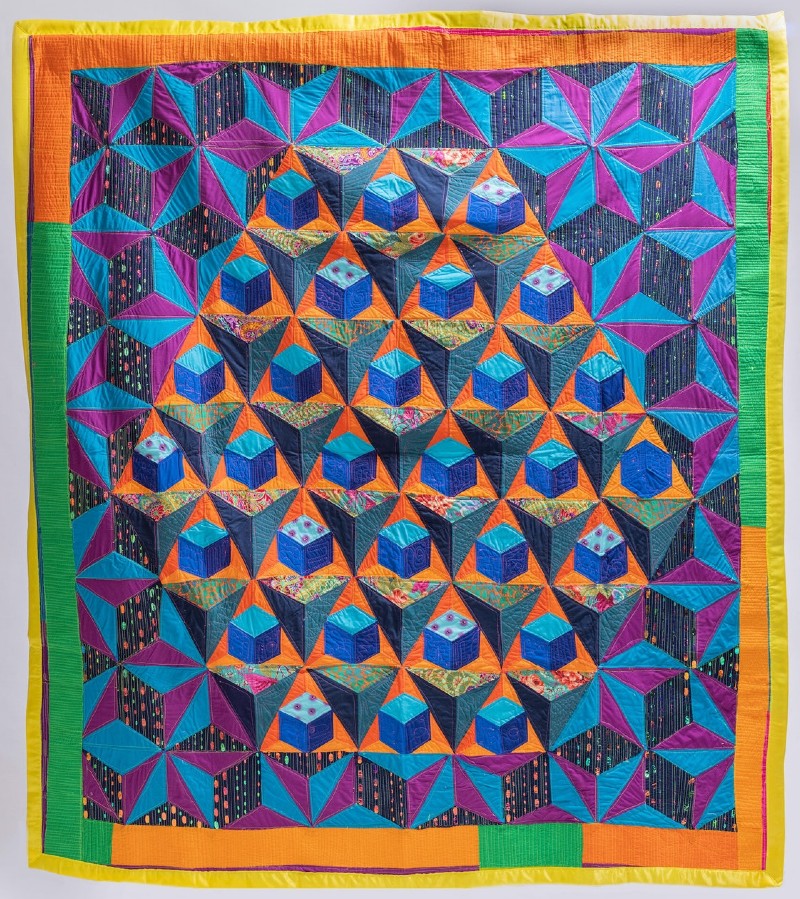 Stamps Gallery’s two simultaneous exhibitions have little in common visually, but they do share some overarching themes.

Mother Cyborg's Crafting Our Digital Legacy exhibit offers bright and captivating quilts that focus “upon our collective relationship with internet technologies, identity, legacy, and the future,” according to the text placed in the front of the gallery.

While Weisberg’s often-muted tones and figural works contrast visually with Mother Cyborg’s dynamic abstract textiles, both artists ask us to consider where we came from and where we might be going.

Mother Cyborg is the Detroit-based multi-media artist, musician, and educator Diana J. Nucera. In Crafting Our Digital Legacy, Nucera creates both large- and small-scale quilts that comment on our relationship to both contemporary and past technologies. She does so by combining references to technology with the art of quilting, which is frequently minimized as a craft or folk art. The combination of two seemingly disparate subjects creates a unique juxtaposition that encourages viewers to consider quilting beyond “traditional craft,” as it is often perceived. Stamps curator Srimoyee Mitra writes:

[Nucera] debuts a series of quilts that references our relationship to digital technologies, data-mining and security in the age of the Internet. Using bright colors, geometric shapes and patterns, Crafting our Digital Legacy opens up analogue and tactile spaces that invite audiences to reflect upon our collective relationship with internet technologies, identity, legacy, and the future. ... Nucera expands her artist self through fiber works where she addresses critical issues of surveillance, data collection, the redaction of love to likes, and the complexity of identity within it all.

But Nucera also writes that her work "aims to return a sense of wonder and magic to all of us, and rekindle the awe we may have first felt when using a geolocating star map, or being able to video call a person across borders."

"In our weariness of the state of technology, we fail to notice that the ‘same’ data, taken from all of us, has the power to rewrite and mutate the prior century’s worst inequalities into a blueprint for the future," Cyborg writes. "These psychedelic quilts mesmerize while spotlighting surveillance tactics embedded within society bringing into focus the information and questions we should be asking of the future.”

The quilts are decorated with translucent reflective material that often appears as the binary computer language of 0s and 1s. The shiny material flickers rainbow light in one direction and appears invisible head-on, playing with Mother Cyborg’s ideas of embeddedness and misdirection. In Encrypt Me Quilt, 2020, for example, the accompanying wall text reads:

This digital security blanket examines the piecemeal nature of privacy and security tactics used to protect consumers from surveillance. Tools like email encryption, VPNs, and firewalls are individual bandaids that fail to address the systemic nature of our collective surveillance problem … This quilt is decorated in shiny privacy theatrics for us to feel better about our choices.

Nucera uses language such as “digital security blanket” and “bandaids” to describe our default approaches to technology, indicating our current methodologies are not sufficient. In order to understand its power, we must shake a false sense of complacency. Systemic problems require collective solutions, but even when the issues are discussed, the solutions offered are frequently “shiny theatrics” rather than concrete actions.

Mother Cyborg also contributed a display case full of printed tech zines and publications, which are cited as inspiring her practice. Like the quilts, zines are an example of established artistic and communication methods to explore contemporary ideas. Zines are community-based educational resources that Cyborg believes should be centered on “nourishing self transformation” with the “need for technology to be rooted in community, not capitalism.“ She has produced a number of these guides, too, which “create opportunities to educate and liberate marginalized communities while elevating the collective technological consciousness.”

Crafting our Digital Legacy frequently focuses on how surveillance technologies can be used as mechanisms of violence. In many works, Mother Cyborg employs boxes and platform-like shapes to question how technology frames our experiences, or perhaps determines them.

In Data Crunchers, 2021, Nucera explores the impact of technology and surveillance in leading to police violence, stating, “There is no care or justice in this system, just data crunching.” She also asks the audience a crucial question: “So how the hell do we stop feeding it as a collective, not just individuals?”

At the end of Crafting our Digital Legacy, viewers come across a large, bright, red-vinyl sign with text taken from the description of Cyborg's The System’s System, 2021:

There is always something that can crash the system.
Nothing is singular, nothing is inevitable.
Your self-determination is more powerful than any algorithm.
-MOTHER CYBORG

Mother Cyborg has many questions for viewers whose answers will not come easily. She suggests we must turn to collective action, not fall into the same traps of the past, and constantly work toward futures that disrupt the current surveillance machine.

Ruth Weisberg’s work is unmistakable. The exhibition Of Memory, Time & Place displays more than 25 works made over six decades of her career, highlighting her skill as a multi-media artist exploring "the interconnectedness and continuity of successive generations.”

Weisberg’s work confronts ancestral memory through the lens of her Jewish heritage:

Anchored in themes of personal and familial memory; ancestral knowledge embedded in her Jewish heritage, and admiration for Western art history, her unframed canvases, and works on paper create liminal spaces that collapse the time and space, where family, friends from the present and past share space with great painters and Holocaust survivors and those who perished.

The unframed, often unstretched canvases have an air of “unfinishedness,” suggesting liminal space, interrupted trajectories, and the impermanence of objects. In many of Weisberg’s Water Dancer paintings, for example, figures seem to float in a vast blue color field, with little to anchor them to a horizon point, further emphasizing the liminality of the composition.

Weisberg lived in Ann Arbor in the mid-1960s as she pursued her education and has since lived in Los Angeles. In 1971, she published the illustrated The Shtetl, A Journey and Memorial, a limited-edition artist book including text and nine intaglio prints. The works are described as the “heart” of the exhibit Of Memory, Time & Place, and are on display in an enclosed glass case as part of the show. The gallery text notes that “this significant work was a touchstone for her artistic and professional career as it propelled her move from Michigan to Los Angeles in 1969.”

In The Shtetl, A Journey and Memorial, Weisberg focused on “small Jewish towns in Poland (where her ancestors are from) before the Holocaust.” This seminal work motivated her move to Los Angeles and created the groundwork for hundreds of future exhibitions, and lead to Weisberg becoming one of the first women exhibited at the women-led non-profit The Women’s Building, which opened in 1979.

Though much of Weisberg’s art is focused on the passage of time—and can often be tinged with a sense of loss—there is also joy threading through the works.

In Becca and Deb, 1968, a vibrant blue oil on board provides the backdrop for children splashing in the summer heat. In another work, a lithograph titled Awakening I from 2003, a woman lies on a vast bed with a young baby.

Other works suggest a passing of time more literally, such as in the large-scale oil and mixed media work A Year Passes, 1985. In it, a woman stands, painted twice in the same pose on a gold-washed beach. One figure appears smaller, in the distance behind the first. Upon closer inspection, though, both figures are the same woman. She wears the same bathing suit, the same smile on her face. The title suggests not only that the figure has moved within the frame but that time is constantly moving onward.