Portraits in Motion: Joel Swanson's "People and Other Living Things" at 22 North Gallery 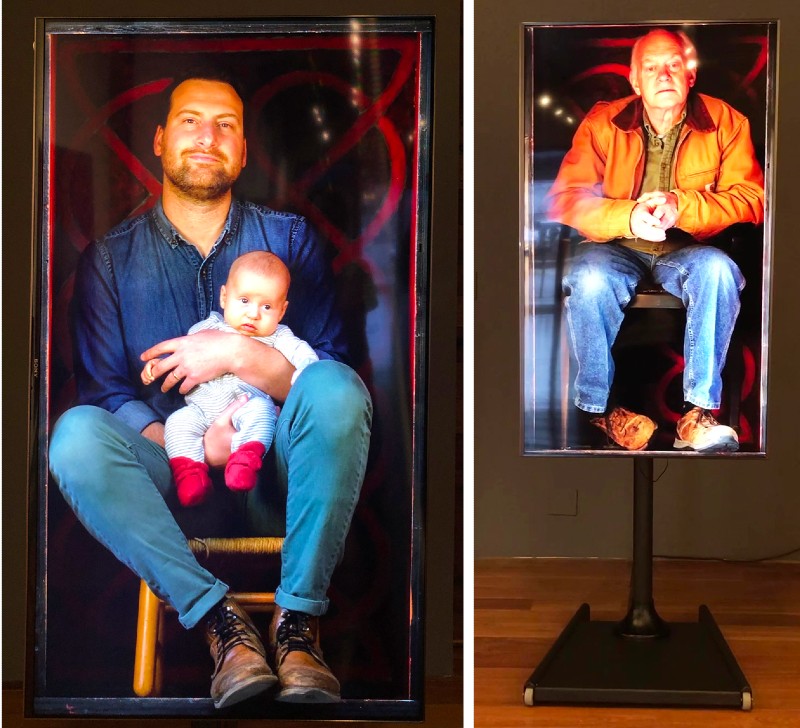 In his first solo gallery show, People and Other Living Things, Joel Swanson brings his considerable powers of observation—honed by years as a research microbiologist—to the examination of his fellow human beings.

On view weekends throughout the month of July 2022 at 22 North Gallery in Ypsilanti, the exhibit is a mix of several bodies of his work that may, on the surface, seem unrelated yet reflect different aspects of Swanson’s interest both in what can be seen by the naked eye and in what lies beneath the reach of our physical perceptions.

Swanson says in his artist’s statement:

Life itself is the most amazing thing in the universe. Living things are temporary assemblages of molecules that take on identity. They use energy from sunlight or food to maintain a suspended state of falling called life. During a lifetime of such controlled falling, they build organic structures and behave as self-aware units.

One of the older pieces in the show, a 2011 acrylic painting Fireflies, hints at Swanson’s habit of close observation and his sense of wonder at the conditional nature of life. The moderately sized painting is an expansive void of mottled midnight blue upon which three images representing fireflies hang suspended, oscillating, as tiny temporary lives. In another body of work in the gallery, Swanson’s preoccupation with this self-organizing principle is made visible by a series of Celtic knot paintings. The artist seems to attach some metaphysical meaning to these artworks; for him, the looping repetition of the pattern represents a persistent yet fragile ordering principle of nature.

The most interesting work in People and Other Living Things, though, belongs to Swanson’s video portraits.

Swanson is no stranger to making his art in public—before he chose the path of science, he was a boardwalk portrait artist for several summers. He has also displayed his video portraits in Ypsilanti’s windows during the yearly YpsiGLOW Festival in 2019, 2020, and 2021.

For his series of 15 video street portraits, Ypsilanti Portrait Project, Swanson set up his backdrop on the sidewalk and asked willing passers-by to stand for video portraits. A variety of subjects of different ethnicities and genders took him up on his offer. They good-naturedly stood, gazing directly at the camera for several minutes each. Swanson, using the video footage as research, produced a series of well-crafted, small-to-medium-sized painted portraits of this group. But in the transition from video to the painted image, something is lost. The subjects in the video make contact with the viewer, yet when the image is recapitulated on canvas, they become psychologically inaccessible. Even when they face out, their eyes don’t connect like the video images. They feel remote somehow—we see them, but do we know them?

In portraiture, there is really no substitute for intimate knowledge of the sitter, and Swanson proves it with two of his video portraits: one of his son and grandson, the other of his brother Walt. Placed in a specially constructed “portrait box,” Swanson’s adult son looks directly at us for an extended period of time, a static pose that makes him seem more alive for all that. By contrast, the baby in his arms squirms and fusses. The juxtaposition of the adult’s resting quiet and the baby’s fidgety energy somehow gets to a unique way of rendering temporality in portrait—a new contribution to an ancient genre. In another box nearby, we encounter Walt Swanson and immediately feel the warmth of his rumpled geniality. We sense this is someone to enjoy spending time with; he seems to be waiting to start a conversation.

Given up for dead a few years ago, portrait painting has made a strong comeback in the 21st century. Black artists, in particular, have led the trend. Amy Sherald, with her grisaille likenesses juxtaposed with colorful patterns, and Kehinde Wiley’s monumental Black men in historic poses have contributed their own idiosyncratic styles. Looking further back in time, we find Chuck Close, Alice Neel, and Alex Katz ready to add their penetrating psychological insights.

Amazingly, the ancient practice of trying to get our fellow human beings down on paper or canvas remains a compelling motive for making art. Joel Swanson’s video portraits extend and expand the discourse, adding a temporal dimension to portraiture that genuinely contributes to the genre.