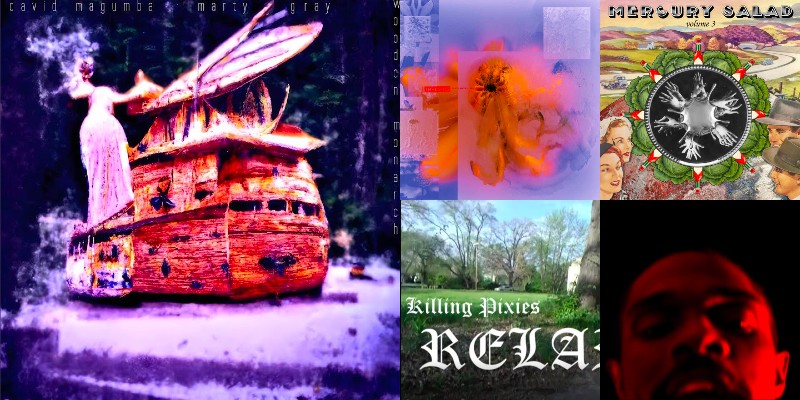 David Magumba, "Wooden Monarch" featuring Marty Gray and "Connect"
One of the great things about living in a college town that attracts world-class music students is that we'll always have a new infusion of talent on the scene. The bad part is that many of those talents eventually leave to make their marks on the world. With that in mind, I predict David Magumba will be leaving town at some point because ... WOW. This graduate of operatic vocal performance program at the University of Michigan has a gorgeous tenor, and his first two singles—last year's "Connect" and the brand new "Wooden Monarch"—are excellent jazz-and-R&B-influenced songs that showcase elevated examples of harmony, melody, and composition. You can also hear Magumba sing on the song "Heavy" on Magic, the latest album from his fellow U-M grad and sophisti-pop explorer Hannah Baiardi. The two also performed the tune on channel 4 Detroit's "Live in the D" series here. (Wherever you end up, David, don't forget to write!)

Placid Angles, (The Lotus) EP
Ann Arbor techno-electronica producer John Beltran has always been prolific, but dude is a boulder steaming down a hill right now. Just last month I highlighted five new Beltran-associated releases; now we can add Placid Angles' latest EP to Beltran's unstoppable rolling rock of a summer. If my deep dive into Discogs is correct, Beltran first used the Placid Angles moniker on a single in 1991, followed by three full-length albums under the name in 1997, 2019, and 2021. (The Lotus) EP comes out on July 22, but the first single, "Stormy Angel," will transport you back to the early 1990s and the effervescent techno-adjacent, mid-tempo pop of groups like St. Etienne, One Dove, and The Sabres of Paradise. (And if you want to get even more obscure: I kept thinking of Ian Catt's electro-pop productions for indie-rock bands like The Field Mice and The Orchids.)

Killing Pixies, "Relapse"
At some point, the pop-punk band Killing Pixies switched its social media geolocation to Detroit, but the quartet's roots are in Ann Arbor. The group has been playing out a lot in the past year, opening for some national touring acts, and its profile is starting to rise as they've continued to hone their youthful mix of salty attitudes and catchy melodies. Killing Pixes' latest single and video, "Relapse," was filmed in Detroit's Palmer Park.

Sonny Dulphi, "Schemin' on Demons"
Sonny Dulphi's Instagram bio states, "I Do ErrthinG." No lies detected. I'm pretty sure the Ypsilanti-based multi-instrumentalist, producer, rapper, and—sure, why not—kickboxer who was born Matthew Hughes also filmed his own video for his latest single, "Schemin' on Demons." The tune begins with a sample of Buddhist teacher Thich Nhat Hanh expressing how we can find joy in everyday things—even washing dishes—before the beat drops and Dulphi starts spitting about schemin' on his demons.

Mercury Salad, Volume 3 EP
Mercury Salad seems like the perfect band to be booked by various summer fests across Washtenaw County because its sound draws from a whole lotta genres, making their appeal broad. The Ypsilanti trio is back with its first recordings in three years, and the four songs on Volume 3 touch on twangy adult pop ("Best Guess," "Walk Around"), ska ("Coming to Rescue"), and light funk ("Hot Sauce 2.0").