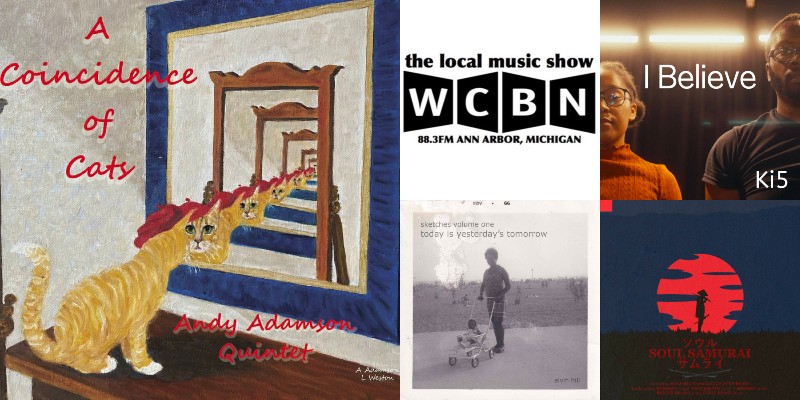 Andy Adamson Quintet, A Coincidence of Cats
I remember seeing the Andy Adamson Quintet perform several times during their weekly residency at Rush—the space on Main Street that was remade into Blue LLama Jazz Club in 2019—and I was always impressed by their energetic and freewheeling blend of fusion and jazz. But between Rush's closing, the pandemic, and all the musicians having multiple other simultaneous projects, I hadn't seen Adamson's ensemble in concert listings for a while (or maybe I just missed it), but perhaps this brand new album will herald the regular return of this fantastic group. Adamson is a self-taught musician and prolific composer, and A Coincidence of Cats features six of his tunes, played by his regular collaborators Brennan Andes (bass), Dan Bennet (saxophone), Ross Huff (trumpet), and Jonathan Taylor (drums). While there is a lot of drive and groove in Adamson's songs, which evoke '70s fusion, there's also a lot of space and free-floating energy that made me think of Miles Davis' mid-to-late '60s acoustic albums.

Ki5, "I Believe"
Ypsi's Ki5 was one of two Amplify fellows for 2022, and "I Believe" is his first single under that patronage. For some reason, I assumed Ki5 might use the fellowship's resources to expand upon his a capella roots and come up with something like his 2021 dance tune "Made of Stars." But "I Believe" is a gorgeous restating of what makes Ki5's sound and songs so unique: his voice. He layered his vox in numerous ways to make a one-man a capella group for this positivity-steeped ballad, which is a brief balm for everything that's going on in the world.

Alvin Hill, Sketches, Volume 1: Today Is Yesterday's Tomorrow
I missed this December 2021 release by Ann Arbor electronic-music producer Alvin Hill when it came out, but I'm happy to have stumbled across it in during the July 2022 heatwave. All the pieces are first-take live performances that conjure minimalist, pointillistic, ambient-leaning IDM tracks, except the beat-driven, vaporwave-meets-gamelan track "atemporal" featuring Rob Avsharian on drums. Play Sketches in your headphones as you *float down the Huron. (*Pulp is not responsible for lost or damaged electronics. Or for anything, really. We're just a blog.)

Half Blue, Soul Samurai
Half Blue is part of Ypsi's Calculated Beats, a trio of "friends making and sharing our original music and art." I think the other two members go by the names Bird's Eye and Hollow Shamen, who you can hear along with Half Blue on this compilation—one of five releases by Calculated Beats in 2022, with the most recent being Soul Samurai. In general, Calculated Beats' members seem influenced by anime music, vaporwave, and other esoteric electronica. The five tracks on Soul Samurai sound like they could have come out on the 1990s Mo' Wax label with the way they pull from trip-hop, soundtrack music, and voice-drop samples to great effect. A most welcome new discovery.