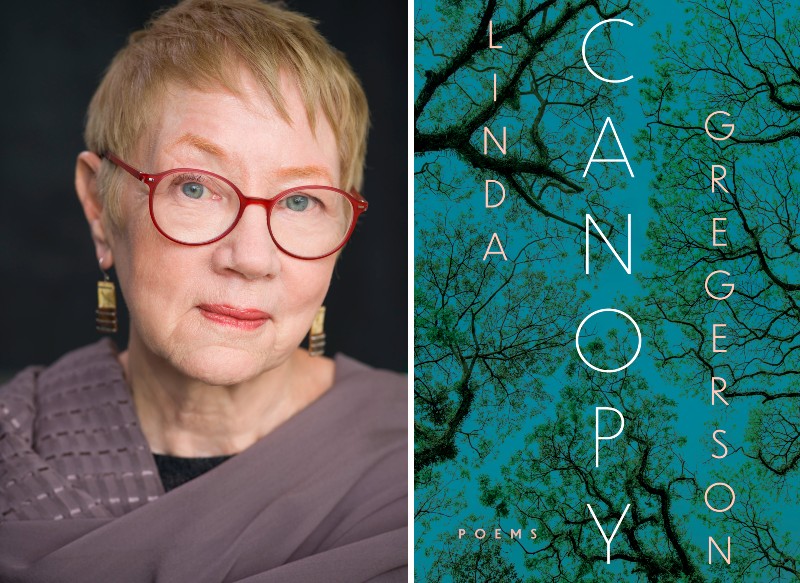 Linda Gregerson’s new book of poems, Canopy, lifts us to the heights of the treetops and also studies those who toil below where “There’s always a moment before the moment when nothing / is ever the same again.”

The single word “canopy” as the title conjures both a place to aspire to and a boundary delineating human limitations.

Gregerson teaches at the University of Michigan as the Caroline Walker Bynum Distinguished University Professor of English and directs the Helen Zell Writers Program. She is a chancellor emeritus of the Academy of American Poets and a fellow of the American Academy of Arts and Letters. She is the author of seven books of poetry and two books of criticism, and she is the co-editor of one collection of scholarly essays.

Trees, land, and the whole environment figure strongly in these poems in Gregerson’s most recent volume. A painting on a panel of oak allows for the identification of when it was created. When shipping was a dangerous, frequently fatal endeavor on the Great Lakes, a relative several generations back “was among the ones / who did not drown. Who sold his ship / and bought a farm.” The land and the trees bring surety and safety.

The reality on the ground, however, often carries both happiness and disappointment, as a poem asks, “What is it / you love / that has not been ruined because of you.”

Canopy considers not just the ecosystem in which we live but also the current events in it, such as the COVID-19 pandemic threaded through several poems and the murder of George Floyd in “Fragment.” Yet addressing these significant events and issues leave us “bound to act and bound / to be not enough.”

Action is necessary, but the problems are much bigger than any individual.

Gregerson nevertheless holds on to delight in relationships and landscapes, such as the “beautiful geometry the trees become / each winter here” in “Epithalamion.” The poem goes on to consider how life regenerates and is also fragile. An epithalamion is a poem to bless a marriage, and Gregerson’s poem does not cast an idealized image but rather one rooted in a seasoned viewpoint. The end of the poem reads:

… we,
when grief has had its way with us, are
all the more

stubborn in matters of joy. The joy
that has been
untouched by grief is precious and

When a person knows pain, joy becomes a respite and perhaps the most one can hope for as an antidote to grief.

Gregerson answered questions from Pulp about her new book.

Q: As a former student of yours, I am excited to have the chance to talk with you again. What keeps you writing and teaching poetry?
A: Thank you, Martha. I only wish we could be doing this in person, over a cup of coffee. Iced coffee, maybe, given the season.

As to your question, I think I simply wouldn’t know how to live without poetry. It’s one of my essential anchors to the world.

Q: Let’s talk about your new book, Canopy. How did you select its title?
A: The title came very late, in fact. I’d adopted a number of other working titles for the volume, each of which seemed right and good, until it didn’t. And then, in one of the latest poems to be completed, I found myself recounting a story, a true one, about the astonishing perceptual capacity of search and rescue dogs, Wilderness Airborne Search and Rescue Dogs to be precise. I already knew something about their extraordinary abilities on land and water. What I hadn’t imagined was how much information they could glean from the exhalations of the trees, in the highest reaches of the canopy. And since so much of the book, so much of my work in general, takes its impetus from gratitude and wonder at the saturating intelligence of the natural world around us (which puts our own poor cognitive capacities quite in the shade), I finally had my title. “When Nothing but Tree” is now the concluding poem in the book.

Q: Would you discuss how you used your tercet form in this book? How was using the form different or similar to your earlier poems and collections? Any new insights?
A: For a number of years, that tercet was my default mode. This is no longer the case, though I find myself returning to it with some frequency simply because it seems to be such a useful instrument for thinking-into-poems. I like its jaggedness, its aptitude for entering into dialogue with the momentums of phrase and sentence (I think of this as the quarrel between poetic line and syntax, though sometimes, like all adversaries, they agree to agree.) And I find the short, indented lines to be crucial: they let in extra white space, a little light and air.

Q: Canopy examines defining moments when there is no turning back, such as when a baler catches a man’s clothes, when human fallibility allows harms to slip by, when reality does not match the hope of “Mortality without the mess,” and when a seed vault is meant to insure survival. Were you thinking of such crossroads as you wrote, or do you see these ideas a different way?
A: “There’s always a moment before the moment when nothing / is ever the same again.” Yes, I suppose the longer I live, the more keenly this is impressed upon me. If my uncle’s overalls hadn’t, in that split second, been caught in the farm machinery, he wouldn’t have lost his leg. If we hadn’t been distracted by a thousand smaller concerns, I might not have had to read the following headline in this morning’s Guardian: "Heatwave Led to London Firefighters’ Busiest Day Since Second World War." We are granted, each of us, only this one precious span of life. No do-overs. We have only this one precious planet on which to live.

Q: The poem, “Narrow Flame,” depicts a sad, sweet moment in an animal’s last moments. Where did the phrase “toxic everlastingness” come from?
A: There are names for the chemicals the veterinarian injected when my daughters’ beautiful horse had to be put down, and sometimes one wants exactly such words in a poem. In this case I tried to find a name for what it is those chemicals do.

Q: The poem “Environmental” juxtaposes the speaker walking with a car passing by. A line mentions “the fight against global warming.” How does poetry engage with the climate crisis?
A: How can poetry avoid such engagements? Climate change is the existential circumstance of our shared time on earth. Poetry can’t heal the hole in the ozone or restore the Arctic ice cap, but while we do everything possible to ameliorate the continuing devastation, as we must, we must also somehow live in the meantime. Living in the meantime is very much poetry’s concern. In the poem you mention, I was trying to make room amidst the often-overwhelming sense of emergency for a little lightness, a moment of social courtesy. We mustn’t forget to save a place in our hearts for joy.

Q: What are you looking ahead to next?
A: Writing new poems of course.