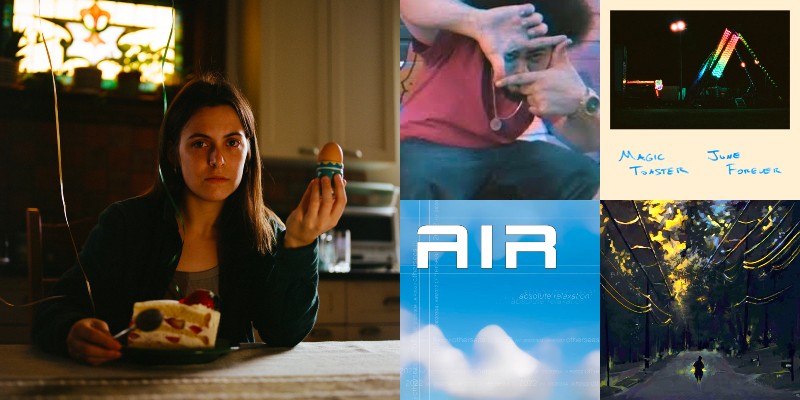 This week features orchestral indie-folk from Lily Talmers, beat-driven tunes by Olivia Cirisan, otherworldly electronica via Otherseas, power-pop by Magic Toaster, and the return of the boom-bap by Tru Klassick.

Lily Talmers, Hope is the Whore I Go To
"Saudades" is the last track of Lily Talmers' new album, but the sentiment behind the Portuguese word—melancholic longing—is the primary mood of these 10 tunes. The UMich grad is now based in New York City, but she recorded much of Hope Is the Whore I Go To in Ypsilanti, along with the upcoming companion album, My Mortal Wound. Where the forthcoming LP is mostly solo, Hope is an expertly arranged melange of acoustic guitars, strings, horns, and percussion. Talmers' quirky and powerful voice delivering personal poetics—she grew up in a Greek Orthodox church and religious influences appear throughout her lyrics—are still at the heart of all these songs, as was the case on her first album, 2021's Remember Me As Holy. But one thing that stood out about this album versus her debut is the way Talmers and her bandmates play around with rhythm on this record. Talmers frequently plays Greek music, so that element is here, but there are also Latin American and Brazilian influences in the songs' structures and rhythms—and their melancholy moods.

Olivia Cirisan, Guilt Trip Joy Ride EP
Move over, Greta Van Fleet: There's a new musician comin' straight outta Frankenmuth competing for ears. But the difference between Greta's expert Lep Zep aping and the three songs on Olivia Cirisan's debut EP is that the latter's sound is more singular and personal. Cirisan is an undergrad at UMich in music education and percussion is her main instrument(s), so the songs on Guilt Trip Joy Ride are built from the bottom up rather than harmonically. Where "Blueberry Bubbles" is a low-key, spaced-out instrumental, "Betsy" and "O" feature Cirisan's sweet voice and sound like torch songs delivered in a dream state.

Otherseas, Air
Tom Maher is a UMich student studying computer engineering and makes lovely music under the name Otherseas. I'm going to guess that his new album, Air, was directly influenced by one-time Ghostly artist Tycho. If not, then Maher has to download some Tycho tunes immediately (which any of you can do if you're an AADL cardholder). Otherseas' electronica is effervescent and bright, and the nine tunes on Air will lift your spirits. (I missed Otherseas' other 2022 album from January, Environments for 12 Buildings, which is more ambient and experimental.)

Magic Toaster, June Forever EP
Erez Levin is a former UMich student now based in Brooklyn. He's been making music and videos under the Magic Toaster name since at least 2019, but his new five-song EP is the first I've heard and it's a terrific collection of power-pop tunes. (While there are no credits listed, a person who purchased June Forever on Bandcamp says Vulfpeck's Joe Dart plays bass.) Magic Toaster has also released a series of clever singles/ videos over the past year that are also worth checking out.

Tru Klassick, "Last of the Real"
Ann Arbor MC Tru Klassick went back to a track from his 2019 album, Mastah Chief, for his new video, shot by Ypsi production company Drop Creative. There's more boom-bap on "Last of the Real" than we typically hear in modern hip-hop—think instead of the early 1990s when the drum samples still banged—and this video was a welcome reminder for me to check out Mastah Chief. You can catch Tru Klassick—and wish him a happy birthday—along with Sigidy and Where She Creep at The Blind Pig in Ann Arbor on Friday, July 29.