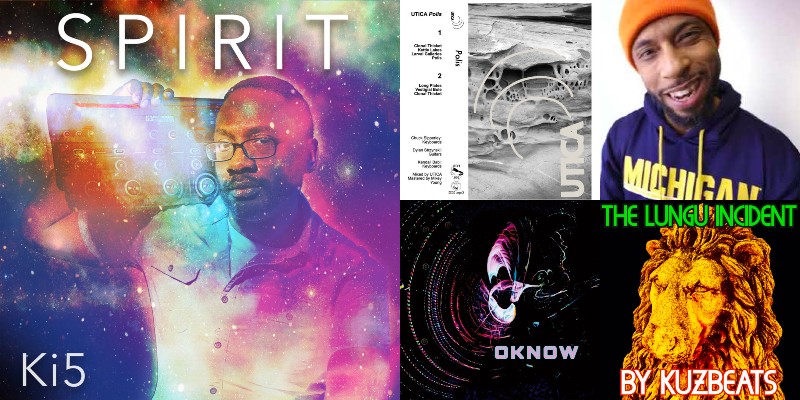 This week features pop-a-cappella by Ki5, hip-hop from Kiyoshi and 3Steez, pastoral ambiance by Utica, '90s-esque alt-rock by Jonathan Crayne, and experimental songcraft by KUZbeats.

Ki5, Spirit and "I Believe" video
Spirit is the long-awaited debut full-length album by the Ypsi-based vocalist Kyler Wilkins, aka Ki5, created in partnership with The Amplify Fellowship of Washtenaw County. Wilkins builds his songs by singing most of the parts, creating a sort of pop-a-cappella that is distinctly his own style. There are some musical touchstones I can point to that help frame certain songs: the title track is propelled by a driving, minimalist new-wave beat, and I can imagine an emo band covering "Celebrate" even if the song's opening evokes the South African harmonies of Ladysmith Black Mambazo. But Spirit is so thoroughly Ki5, so completely Kyler Wilkins' vision that it's hard to compare his music to anything else in the pop world right now. The closest analog might be Bobby McFerrin in the way both he and Wilkins layer their voices to create complete songs, but where McFerrin is coming from a distinct jazz background—"Don't Worry, Be Happy" is a bit of an outlier for him—it sounds like Wilkins approaches his music more like a singer-songwriter who just so happens to use his voice as the primary supporting instrument to his lead vocals as opposed to a guitar or piano.

Positivity and emotional openness course through Wilkins' words, which he sings earnestly and passionately without overselling, the sentiments flowing easily and naturally from his heart. That's just his Spirit​​​​​.

The first two singles for Spirit are also supported by videos. The new clip is for "I Believe," and like last year's "Fly," it was choreographed by Maxine Wilkins, Kyler's niece. The video was filmed at Leon Loft's performance space in Ann Arbor by Nathaniel Wright and Trevor Ferla.

Kiyoshi, "I Am Elevated," produced by 3Steez
Former Ann Arbor resident Kiyoshi is now based in San Diego, but for his new single, "I Am Elevated," he returned home. The song was produced by 3Steez, aka Tré Styles from Ann Arbor's Athletic Mic League, and it's a terrific calling card for Kiyoshi's day job: rap coach. That's right, this man helps folk unlock their lyrical flows (as well as their chakra flows since he's also a yoga teacher). "I Am Elevated" showcases Kiyoshi's strong wordplay and commanding delivery.

Utica, Polis
Utica is the Washtenaw County collective of Chuck Sipperley and Kendall Babl on keyboards along with guitarist Dylan Strzynski (who also has an excellent sculpture exhibition at A2 Art Center). They create improvised soundscapes that recall the pastoral vibe of German ambient pioneers Cluster, whose music billows and folds upon itself in an endless loop of beauty. The exceedingly lovely Polis is Utica's first album since 2017's self-titled record, and the trio's return is a welcome surprise.

Jonathan Crayne, OKnow
Jonathan Crayne is from Adrian, Michigan—as documented in this nice feature article about his new album, OKnow, in his hometown newspaper. But he's also a guitar, bass, and percussion instructor at School of Rock in Ann Arbor, and OKnow was mastered by Brandon Cooksey at Inc. Studio in Ypsilanti. That's more than enough Washtenaw County connex to qualify for the Friday Five. Crayne's songs evoke the alt-rock '90s radio he grew up on, conjuring everything from Weezer to The Offspring.

KUZbeats, "Shyborg" and "The Lungu Incident"
Michael Kuzmanovski (formerly of Ghostly artists PostPrior) consistently releases singles on his Bandcamp page that defy easy categorization. The Ann Arbor artist is primarily a drummer, so some of his songs sound constructed from the beat on up. But "ShyBorg" is sort of a manic Devo-esque new-waver, while "The Lungu Incident" is more spacious and laconic, perhaps inspired by his recent time in Zambia. (There's also an instrumental version, "SlyBorg.")