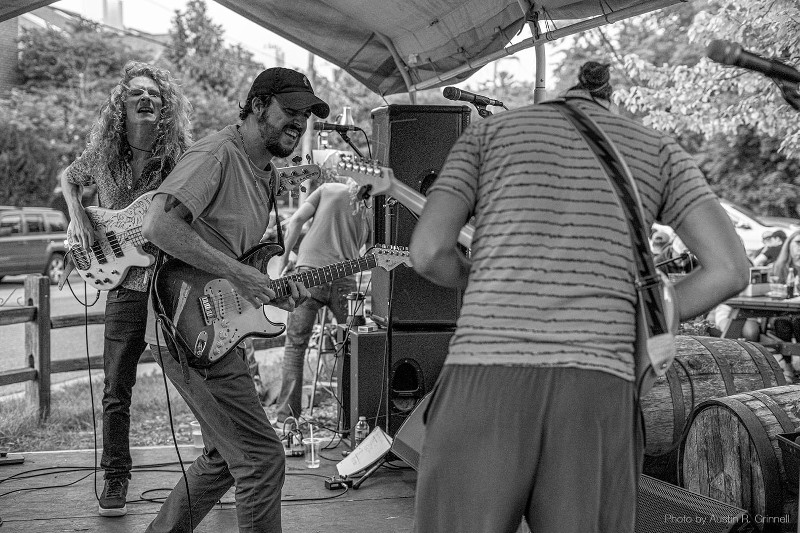 After his pet rat passed away, Jay Frydenlund was at a loss for words.

Instead, the Chirp frontman decided to honor his late rodent companion, Stevie, with a spirited namesake instrumental.

“Stevie the Rat was the most fearless rat that has ever existed, so I wanted to write something about her that represented that,” said Frydenlund, Chirp’s lead vocalist and guitarist. “I started working on it a few days after she died.”

Buoyant electric guitar, soulful bass, and pulsating drums scurry throughout the melodic funk and psych-rock adventures of Stevie’s past.

“I think the energy of the tune represents Stevie’s pretty well,” Frydenlund said. “Brian [Long] lights that song on fire with his bass solo. If Stevie were a bass-playing rat, that’s exactly what she would have done.”

Chirp will share “Stevie” and other fresh, funky tracks during an Aug. 13 show in Ann Arbor’s Liberty Plaza as part of the Concert to Shut Down Line 5. It will be the band's first hometown show since playing Ann Arbor Summer Festival: Top of the Park in June.

“It’s always a good time getting down for the hometown audience and seeing so many friendly faces in the crowd,” Frydenlund said. “We’ve got Graham Low from Pajamas subbing in on the drums, and that’s always a great time.”

Chirp’s also been having a great time since playing a growing roster of live shows—many of which they release for download and streaming on Bandcamp—with new drummer Blommel as well as releasing six new singles throughout 2022. Those singles serve as the band’s first new studio material in over three years.

“This summer has been a doozy, for sure … so many dope shows and festivals,” Frydenlund said. “It’s been great to be putting new music out steadily while we’re at it. Pat [Blommel] has been absolutely killing it on the kit and has proved to be a really quick learner … his pocket is a deep one.”

In addition to their live shows, Chirp shares a deep, summery groove on “Move,” a contemplative single about taking chances and starting anew. A breezy fusion of electric guitar, bass, synth, drums, and cymbals urges Frydenlund to take the plunge as he sings:

“Writing and performing this song live serves as sort of a reminder of the importance of staying on the move, both in a literal and figurative sense. Funny enough, I wrote this one pretty soon before quarantine first started and when this became much more difficult to do,” Frydenlund said.

“The verses and choruses are definitely inspired by all of the Cory Wong I was listening to at that time—and still am—and the bridge feels very Beatles-y to me—McCartney, specifically—given the chord progression, vocal melody, and the arrangement of the backup vocals.”

After taking risks on “Move,” Chirp pays tribute to an unnamed counterpart on “Little Friend,” which provides an addictive and tranquil rush of electric guitar, bass, and drums.

Frydenlund sings, “He is a friendly guy / He doesn’t want to get too much in the way / But I have to see him every day.”

“I’m going to have to leave this one a mystery because it’s more fun that way,” he said. “Funky and heavy is always one of my favorite combinations, both when it comes to listening and writing.”

To shape their latest batch of singles, including February's "By the Book" and March's "Hooks," Chirp collaborated with engineers Ken Yamori Ball and Joe Sleep at Willis Sound in Willis, Michigan. They also worked remotely with Minneapolis keyboardist-composer Kevin Gastonguay of Cory Wong and The Wongnotes on several tracks, including the '70s R&B-flavored single "Solo," released in January.

“Ken obviously had some familiarity with the tunes having been our previous guitarist, and we had a chemistry already built-in with Joe and him,” Frydenlund said.

“Both of them have a reliable knowledge of gear that’s available to use at Willis Sound and are able to make great suggestions as far as which mics, amps, and instruments to use for our particular parts.”

Chirp will drop three additional singles from those recording sessions, including the mellow, meditative ballad, “Day,” on Aug. 19. In fact, all nine tracks will be included on their upcoming album, In Motion, which will be released soon on vinyl.

Chirp performs at 4:30 pm on Aug. 13 at Ann Arbor’s Liberty Plaza, 310 S. Division St., as part of the Concert to Shut Down Line 5 along with four other bands; the whole event runs 2-8 pm. Free but donations are accepted.