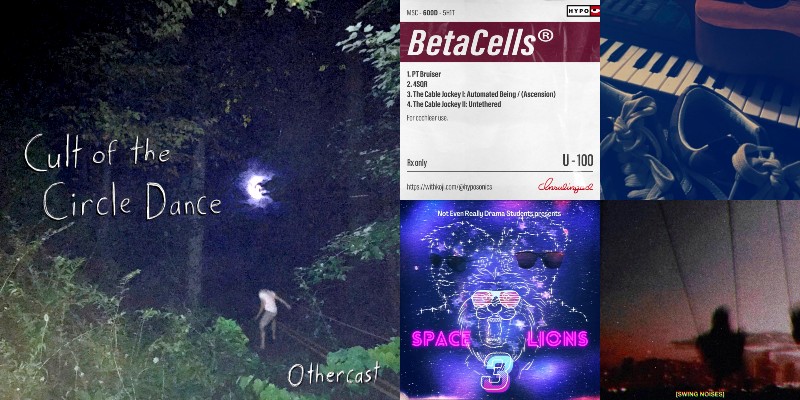 This week features a smorgasbord of various hops—hip, trip, and otherwise—by Othercast, Half Blue, Exy, and Insulingod, plus musical-theater originals by Not Even Really Drama Students (N.E.R.D.S.).

Othercast, Cult of the Circle Dance
Kelman Wolfkostin is Othercast, and the Ann Arbor producer has written a soundtrack—and a plotline—for a spooky movie that exists in his brain, Cult of the Circle Dance. The 20-track instrumental LP mixes trip-hop and ambient elements to tell the tale of a young person—perhaps a college student?—who conjures a mystical world through a dance in the woods that brings together all sorts of lost souls seeking community ... until that fantasy world, like the real one, crumbles under the menacing weight of The Darkness. Wolfkostin said he's been working on the album for a long time, and the attention to detail shows. Cult of the Circle Dance is an immersive headphone listen—but you might want to keep the lights on to stave off The Darkness.

Half Blue, [SWING NOISES]
Half Blue is one-third of Calculated Beats, an Ypsilanti-based arts and music collective who do a great job of evoking the sampledelic side of early 1990s instrumental hip-hop. The samples used to construct [SWING NOISES] are mostly grabbed from jazz records made between the 1950s and 1970s, and there's no way they've been cleared for usage. But that sort of crate digging and recontextualizing is what made 1980s and pre-lawsuits 1990s hip-hop so inventive and exciting. These eight songs total just 11 minutes, so a lot of [SWING NOISES] feels like a taster demo, but it's definitely worth a bite.

Exy, "Whole Time" & "Suge in the 90s"
Exy is an Ypsi-based rapper who just came on my radar but he's been cranking out stuff with a variety of collaborators for a while. The catchy "Whole Time" was produced by Cashmere Washington, who specializes in shoegazey indie rock, but this is a straight-up hip-hop tune. "Suge in the 90s" likely samples an emo or pop-punk song—it evokes the opening riff of blink-182's "Adam's Song" but slowed way down—and Exy's rapping has a sing-songy quality, with a full-on sung chorus. The Soundcloud rap scene continues to thrive.

Insulingod, BetaCells EP
The supertalented Steve Klingbiel is Insulingod. The Ann Arbor by way of Washington, D.C., wiz produced the killer Killa Kam album The Cave That I Left, which came out earlier this year, and he's the leader of Hyposonics, which he describes as a "Midwest digital music collective." While Killa Kam's record was hip-hop, Klingbiel's production style leans more toward quirky instrumental electronica, which he dives headfirst into on the BetaCells EP. (Then again, Kam is such a good rapper could probably rip bars on these four tracks, too.)