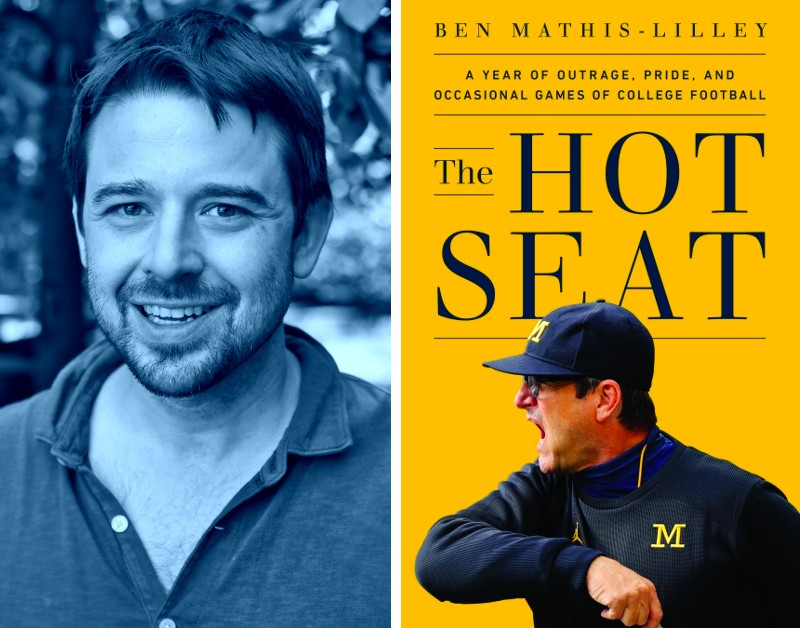 One of my favorite parts of Slate senior writer (and rabid longtime Michigan fan) Ben Mathis-Lilley’s new book, The Hot Seat: A Year of Outrage, Pride, and Occasional Games of College Football is a list of fan site comments during U-M’s second game of the 2021 season.

After noting that U-M beat Washington 31-10 that night and that the Wolverines were never, for a second, tied with or losing to the Huskies, Mathis-Lilley shares three and a half pages of these in-the-moment fan perspectives. A few cheery examples: “We’re going to get killed by any offense with a pulse.” “Passing game is atrocious.” “We are not good.”

Of course it’s possible to spot a team’s flaws even when they win, but the pronounced Debbie Downer-ness of this running commentary, shared while a convincing Michigan win on national television is unfolding, makes you wonder: What more could Michigan football fans want? Good lord, would anything make us happy?

A similar (but arguably more justified) dissonance involves Coach Jim Harbaugh, who found himself on the titular Hot Seat at the start of the 2021 season, after U-M suffered an abysmal, mercifully truncated 2020 season (2-4). He’d had three 10-win seasons since becoming head coach at U-M in 2015, as well as one nine-win season, but the fact that he’d not been able to beat Ohio State had put his job in jeopardy even before the first pre-game coin toss of the 2020 season.

As Mathis-Lilley explains, “The modern Michigan fan base and its sense of how successful the program should be were created in the '70s. It is that baseline against which Harbaugh was being judged”—though population redistribution (favoring the South), increased athletic racial integration, and the role of money (TV contracts, sports journalism/media, government funding for public universities, etc.) has vastly changed the college football landscape in the interim.

These are a few of the tributary paths Mathis-Lilley explores in The Hot Seat in order to provide a bird’s eye overview of how college football got to where it is now, in addition to examining the enigma that is Jim Harbaugh (“He simply broadcasts on a different frequency than the rest of us”), and why hardcore fans like Mathis-Lilley “experience churning gastrointestinal distress on Saturdays during the season until Michigan has a lead of at least seventeen points.”

The perspective is therefore that of a thoughtful, smart, often-hilarious fan rather than an insider—and this is one of the book’s chief selling points. Mathis-Lilley isn’t providing the view from the locker room or the sideline; he’s on the couch or bleacher seat next to us, filtering relevant research and interviews into insights delivered with Wolverine-claw-sharp wit (“Michigan had struggled on third downs the previous season, as well as on the other downs”). This makes him a deliciously fun companion for a 2021 season retrospective.

Not that this look-back exhaustive; Mathis-Lilley wisely focuses his chapters on a handful of the biggest, most meaningful games of last season while opting out of chronicling Michigan’s routs (lookin’ at you, Maryland, Indiana, and Northwestern). Meanwhile, the highlighted games act as a springboard into related discussions that expand the narrative beyond quippy game recaps.

The Michigan State game chapter, for instance, features Mathis-Lilley’s interview with Brighton-bred political journalist Tim Alberta, who grew up a Michigan fan, but found a couple of U-M students’ arrogance so off-putting that he ended up choosing Michigan State. The conversation digs into sport as politics, and politics as sport, and articulates some tough truths involving both class and history. “Land grant colleges … were often located in the vicinity of older liberal arts schools,” Mathis-Lilley writes. “The snob versus slob dynamic in college football was destiny.” (Mathis-Lilley, it should be noted, grew up in Midland, never attended Michigan games, and opted for Harvard upon graduation. When he was a young kid, though, he’d arbitrarily decided he liked Michigan’s colors and uniforms, and thus a lifelong fan was born.)

Mathis-Lilley also rounds out the book’s perspective with a couple of key points of comparison: a big, hallowed program in the South that’s been beleaguered by its own complicated coaching tensions (LSU and Ed Orgeron); and an African-American coach, Willie Taggart (now at Florida Atlantic University), who landed his dream job at Florida State, only to be fired in the middle of just his second season—though his successor has fared no better, overall record-wise.

In an epilogue, Mathis-Lilley touches on Michigan’s post-season high (Big Ten Championship) and jokily sidesteps the low (a certain disastrous playoff bowl game against Georgia), but the regular season, which fortunately for him and us had the happiest of happy endings, is the book’s real focus.

Besides, if you’re an obsessive fan, you’ll do precisely what my husband did upon spotting The Hot Seat in our house: you’ll flip to the OSU game chapter to relive that day all over again.

Ben Mathis-Lilley will discuss his book "The Hot Seat: A Year of Outrage, Pride, and Occasional Games of College Football" at Literati Bookstore, 124 E. Washington St., Ann Arbor, on Tuesday, August 30 at 6:30 p.m. The event is free but masks are required.