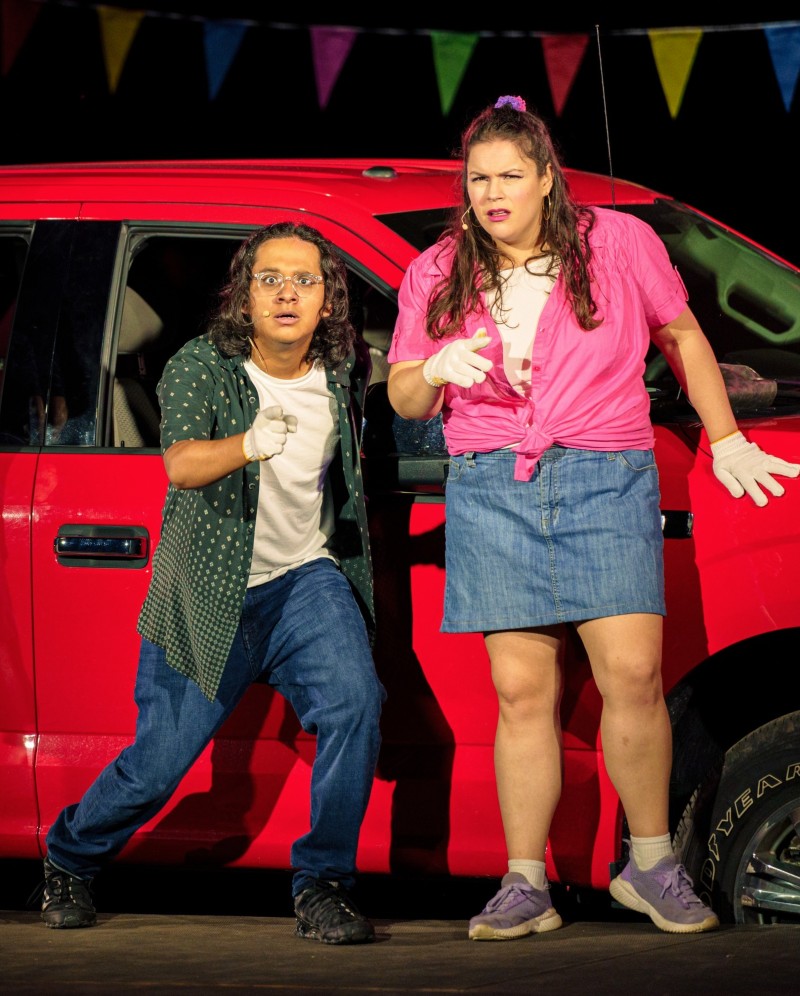 Some narrative setups just prove too irresistible to pass up.

In the case of the musical Hands on a Hardbody, a group of down-on-their-luck Texans gather at a car dealership for the chance to win a new red Nissan pickup truck. To win, they must stand for days on end with one hand touching the vehicle at all times, and they each have their own motivations for committing to this grueling exercise—which means, of course, everyone has a unique story to tell.

Think of it as A Chorus Line for economically struggling Southerners.

This boiled-down assessment, as it happens, additionally hints at some of the inherent challenges of the show: how to toe the line delicately between caricatures and big personalities; between blue state talking points and red state realities; and between appropriation and a heart’s-in-the-right-place effort at inclusion.

But the play vacillates in its ability to pull off this delicate balance, and its structure makes the musical a series of character sketches more than a cohesive dramatic story arc with high stakes.

Yes, each person has his/her reasons for wanting the truck so badly, but in the end, we know everyone will probably be OK if they lose this contest, too.

Inspired by a 1997 documentary of the same name, and now being staged by Penny Seats Theatre in Ann Arbor's Burns Park, the two-and-a-half-hour Hands on a Hardbody premiered on Broadway in 2013 and features a book by Pulitzer Prize winner Doug Wright (I Am My Own Wife) and music by Phish frontman Trey Anastasio and Amanda Green.

The characters are drawn from the real people featured in the documentary, and there are some moments of connection and humor. Benny Perkins (Sealoyd Jones III) initially acts as the audience’s cocky, experienced guide—he won the same contest a few years earlier—and his alliance with fellow “old” J.D. Drew (Lindel Salow) is sweet and reveals the chinks in both men’s armor. Janis (Jenna Kellie Pittman) is a mom whose loyal husband Don (Robert Schorr) cheers her from the sidelines; young UPS worker Kelli (Monica Spencer) and out-of-work, wannabe stuntman Greg (Dante Justice) quickly develop a friendship that tips toward romance; Chris (Michael Bessom) is a circumspect former Marine; Jesus (Alexander Hernandez) is a Mexican-American who wants to be a veterinarian; lothario Ronald (Jonathan Jones) has an ill-advised, Snickers-downing strategy to win; Heather (Leah Gittlen) is in-over-his-head car dealer Mike’s (Donovan Leary) favorite, for romantic and economically strategic reasons; and Norma (Rachael Cupples) sees herself to be on a mission from God, listening to religious music on her Walkman to keep her spirits up.

Norma is, in many ways, the heart of the show, so it’s fitting that Cupples is among the strongest performers in Penny Seats’ production. Her rendition of the gospel tune “Joy of the Lord” is a highlight, and Cupples plays Norma with aching sincerity. Sealoyd Jones III, Pittman, and Spencer also delivered solid performances in their respective roles.

At the performance I watched (August 18), however, some of the show’s actors strained and struggled in regard to the show’s vocals, resulting in some pretty rough notes. Being outdoors often makes the listening that must happen between musicians and singers all the harder, of course, but generally, the outdoor setting is a good fit for this show, with black risers fitted around the central red truck, and the band set up beneath a tent nearby.

Director Lauren London does a good job of incorporating movement in sharply limited circumstances—the actors must keep tethered to the truck at all times—so that things never grow too visually static for too long. But the execution of Christie Sampier’s choreography is pretty hit-or-miss, and music director Brian Ketner’s band commendably adjusted at times when the link between singers and musicians threatened to break altogether. Emily Betz’s costumes effectively conveyed the characters’ sensibilities (Janis’ “Welcome to the sh** show” tie-dye seemed particularly apt), and the set design works well—though because the cast needs to use microphones (that glitched now and then), action set in Mike’s small office, off to the right, was often initially disorienting, since it took a moment to locate who was speaking. (TyChi’s lighting design helped guide the audience’s eyes when darkness fell, but without that contrast, there were hiccups.)

Hands on a Hardbody premiered a few years before the 2016 election, of course, but in some ways, it’s prescient: these characters are part of America’s working poor, struggling to just live their lives, and they feel overlooked and underestimated. (They’re not wrong.) So the respect and dignity the show extends to them—despite a few clunky, ham-fisted scenes, like Jesus suddenly being asked about a green card—feels like an effort to build a bridge between them and the not-so-poor patrons that usually attend live theater.

As a show, Hands has its moments, even if it falls short of achieving “can’t-miss” status. But the larger exercise in empathy is what feels most pertinent about it now.