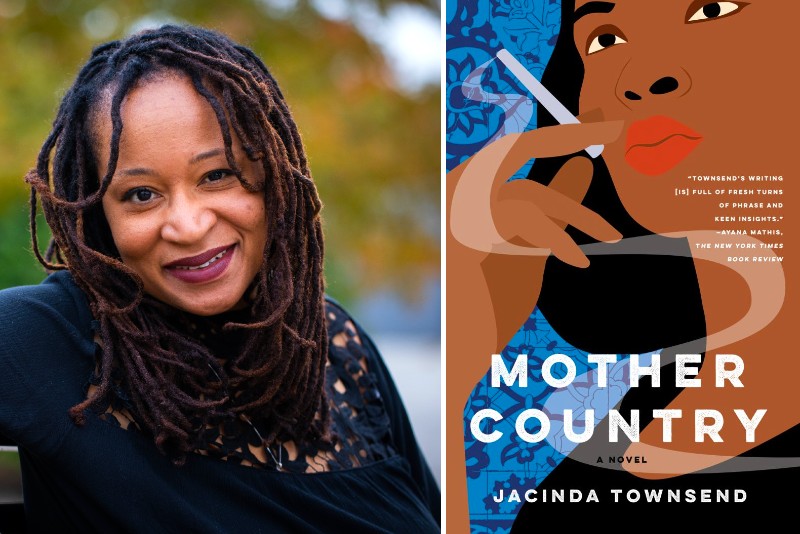 “Some people wanted freedom, she thought, and others wanted safety. She’d never find the two in the same place.”

This reflection by the character, Souria, in Mother Country weighs the impossible choices that characters make—or are forced to make. Jacinda Townsend’s new novel examines the repercussions of human trafficking, the implications of family bonds, and cross-continental ties. Townsend is the Helen Zell Visiting Professor in Fiction at the University of Michigan. She is also the author of the novel Saint Monkey.

In Mother Country, when one mother, Souria, loses her child in Marrakech, another woman, Shannon, becomes a mother, gains a daughter, and brings her to Louisville, Kentucky, even though the events leading up to the switch—and also following it—are problem-ridden. Shannon learns, “The right thing never felt like the good thing.”

Souria’s and Shannon’s lives intertwine in ways made more visible by chapters that alternate between narrating their two separate lives. Later on, the perspective of the daughter—once known as Yumni, then as Mardi—emerges, as well as that of Vlad, who is Shannon’s husband. They all are cognizant of their missteps in life, but there is no turning back to change them. For example, Shannon, who often gets high to blunt the lingering pain from her near-fatal car wreck, perceives her flaws, yet cannot remedy them:

Shannon saw, through two slats of fence, that Mrs. Ganes was standing very still. She knew the woman could smell her weed, but would settle for silence—of course, it would feel better for her not to say anything. The same way it had hurt Shannon less to settle for Vlad as a spouse than to try to come up with impossible dreams for her own life. Following him around the world on his adventures in mechanical engineering, she’d forget that she hadn’t managed to make a life of her own. Always, people neglected the critical things because they hurt more.

Even when the option may not be ideal, or even legal, Shannon and other characters in the book take the path that opens up in front of them.

Eventually, Mardi can see the faults of the adults around her, though, and her tangible reminder of what has happened—herself—may prompt change. When she runs away from home, she reflects, “I’m less important, now that I’ve run away from everything that knows me, but I’m more important to myself. And that matters more.” Despite the events and people shaping her life, she can see how to value herself and life, as Townsend illustrates is so crucial.

I interviewed Townsend about her novel, writing life, Fulbright fellowship, and next novel.

Q: How did you come to write, teach, and live in Ann Arbor?
A: During the pandemic, I left academia to work at a software company. It was an interesting job with lovely people, but I found myself wanting to return to teaching fiction. I’d already received another offer before I received one from the University of Michigan, but when we visited both places, my children fell in love with Ann Arbor almost instantly, and they decided we’d come. My children always make these decisions. (Smile.)

Q: What does the position of the Helen Zell Visiting Professor in Fiction include?
A: I teach three classes per year, two in one semester and one in another, and I get to participate in various aspects of the program, from admissions to the visiting writers’ series.

Q: Would you share how you made the transition from being an antitrust lawyer in New York to writing and teaching in MFA programs?
A: It was difficult only in the sense that I left behind a great deal of income, but my heart had never been in joining the legal profession. I was one of those kids who’d been dissuaded from a career in the arts when I probably should have been encouraged. I was working 80 hours a week on a merger when I got into the Iowa Writers’ Workshop, and going away to the prairie to worship words and stories for two years felt like a no-brainer at that point.

Q: You spent a year as a Fulbright fellow in Côte d’Ivoire. What was your experience as a fellow?
A: It was amazing, perfectly amazing. It was the first time I’d been to Africa at all, let alone to live there. Every single day was a huge adventure. I started off living in the capital city with a roommate, but we quickly unraveled, and I moved to the beach to live in a 300-year-old former colonial mansion. I traveled to Mali and Ghana while I was there and made it all the way to Timbuktu. My French was initially terrible, but at that time in my life I was a huge daredevil, so I made up with boldness for what I was lacking. I cherish that time. I grew up so much that year and came back with a whole new perspective on the world. I can’t imagine what smaller things I’d be writing were it not for that Fulbright year.

Q: The settings in your new novel, Mother Country, feel so palpable, both in Marrakech, Morocco, and Louisville, Kentucky. What did translating your knowledge of these places into fiction involve?
A: Oddly enough, I’d say it mostly involved forgetting them. And what I mean by that is that I wanted to forget them as I knew them, so intimately well, and make them new again for my readers. I needed to see Morocco from the perspective of a recent immigrant and a tourist, and that was difficult. One advantage I had is that I’m practically illiterate in Arabic—I just know the alphabet. So in some ways, I’ve been as lost in Morocco as Souria and Shannon were.

Q: Your bio on your website mentions that you witnessed modern-day slavery in Northern Mali and then Mauritania, and in your novel, Mother Country, slavery disrupts the characters’ lives. How did you decide to write about this painful practice?
A: I was doing work on a story for Al Jazeera in 2013 and I snuck into Mauritania on a tourist visa, then met up with a couple of anti-slavery activists who’d agreed to host me. One of them introduced me to a woman who had just escaped slavery with her eight children. All of these children were different colors because she’d been leased out as a prostitute by her master. The last of the children had been born on her way out of the desert, and I got to hold that baby, and feel that power that someone in my ancestry had felt once upon a time, of holding the first child born out of slavery. It was an incredible moment. I asked the woman what I could possibly do for her. She said, “Just tell my story. Tell my story.” I hope that in composite, I did.

Q: Many situations in your new novel bring turning points that irrevocably change the characters’ lives. As a reader, I love those moments when I wish I could jump into the plot and help in a situation but cannot. Do you feel the same way when writing, or do you feel otherwise?
A: My friends often joke that I’m mean and nasty to my characters. I’ll just say that I wouldn’t want for them not to have the full plot adventure. (Smile.)

Q: Shannon’s relationship with her daughter, Mardi, in some ways parallels her own fraught connection with her parents. At a young age, Shannon “decided to break apart from her parents forever, the frustration being that she knew she had seven more years to live with them. It would be less like the snap of a branch from a tree than like the excision of yolk from an egg.” Similarly, Mardi thinks of her adoptive parents as “dad cutout” and “mom cutout.” How did you construct the family patterns repeating themselves in your novel?
A: Hurt people hurt people. But hurt parents tend to hurt their children in entirely different ways than they were hurt. This is, of course, often true in real life, but it’s so necessarily true in literature—I learned early on that exact parallels don’t sit well with a reader. So I aimed for the ragged surprise of Shannon’s trying not to be her own parents and failing in a spectacular new way.

Q: What are you reading and recommending these days?
A: I just finished Peter Ho Davies’ novel A Lie Someone Told You About Yourself, which is a delicious read. It’s a departure from what I’d previously read of his work, and it lands so well.

Q: Your next novel, James Loves Ruth, is forthcoming. Would you tell us about it?
A: Yes! Thank you for asking. James Loves Ruth is also told in diptych, from the dueling perspectives of Ruth Cottam Hurley, who changes her identity and moves across the country after her father is killed during a shocking afternoon of police brutality, and her soon-to-be-ex-husband James, who has lived with a different version of Ruth for the two decades he’s known her. Like my other novels, it’s deeply political. But I wrote it during my first encounter with deep, unstoppable grief, so it’s a much different book.