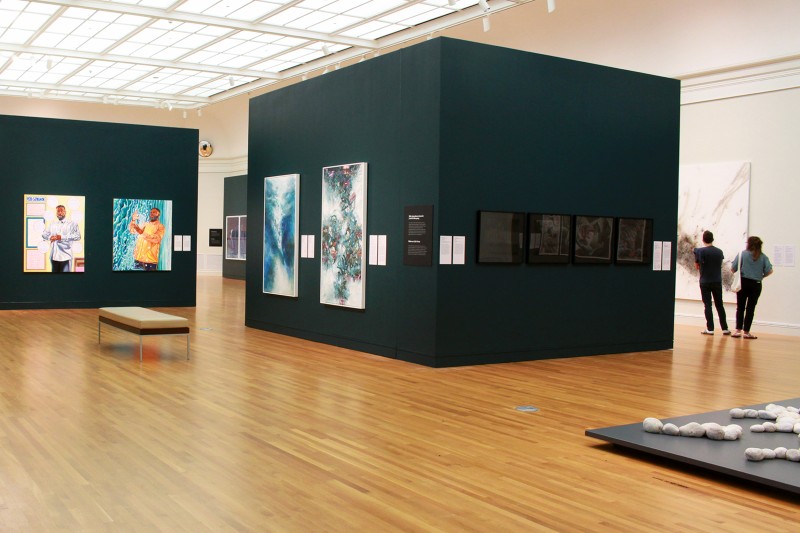 Inside the gallery at ​​the University of Michigan Museum of Art's Watershed exhibit. Photo courtesy of UMMA.

​​University of Michigan Museum of Art’s (UMMA) Watershed exhibition comments on the complicated relationship the Great Lakes region has with water. Despite the area's broad access to fresh water, cities like Flint have endured ongoing water crises, rivers like the Huron are impacted by contaminating spills, and the Great Lakes watersheds continue to degrade.

The exhibit brings together a diverse group of 15 contemporary artists whose works focus broadly on the Great Lakes area. Watershed offers wall text in both English and Anishinaabemowin (translated by Margaret Noodin and Michael Zimmerman, Jr.) in recognition of the Anishinaabeg (commonly referred to as Ojibwe) being indigenous to the Great Lakes region.

​​Watershed is complex and expansive. As curator Jennifer Friess states, it “immerses visitors in the interconnected histories, present lives, and imagined futures of the Great Lakes region.” The exhibition title refers to “the geographical network of the Great Lakes basin—the five lakes (Huron, Ontario, Michigan, Erie, and Superior) and rivers, streams, and reservoirs that feed into them.”

The artists’ engagement with the concept of the Great Lakes regions’ rich and often exploited resources vary in scope and content, offering a wide array of responses to past, present, and future iterations of activism and justice related to these waterways. Friess notes, “Many sound an alarm about the pervasive and lasting effects of corporate self-interest and extractive pollution. … All demonstrate how art can contribute to and shape current dialogues on the critical problems confronting our region.”

​​As noted, this exhibition features six new commissions from artists selected by the museum: 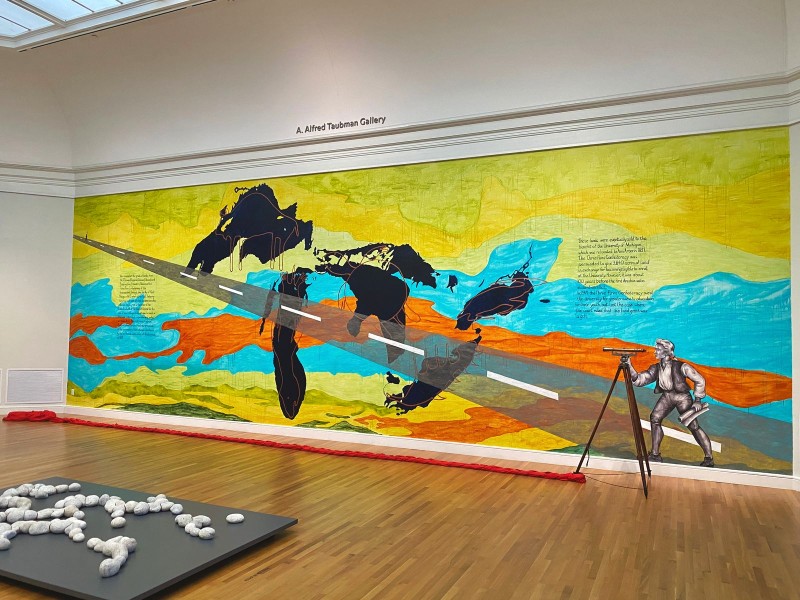 ​​Bonnie Devine is a Canadian-based Anishinaabe-Ojibway artist. Her UMMA commission, The Gift, is a large-scale multimedia mural that “examines the accounts of colonial expansion across the Great Lakes watershed.” The expansive, bright mural incorporates elements outside of the wall composition, including a long, red cloth extending across the length of the floor and a standing “surveyor’s transit,” a tool used by colonizers for mapping land. A surveyor is painted in the lower right corner of the mural, and from the proper angles, it looks like he's holding the transit. Above the figure is the following text:

​​We remember the grant of lands from the Ojibway (Chippewa) Odawa (Ottawa) and Bodewadimi (Potawatomi) Nations of the Three Fires of Confederacy of the Anishinaabek, through the treaty of Fort Meigs in 1817, which states that ‘believing they may wish some of their children hereafter educated they do grant to the rector of the Catholic church of St Anne of Detroit for the use of said college, to be retained or sold as the said rector and corporation may judge expedient… the rector was Gabriel Richard, a founder and first vice president of the corporation of the college, chartered by the territorial legislature of Michigania in 1817.’

​​The mural's surveying figure is framed by the long, red cloth, suggesting the impending violence enacted by these new “settlers” on the indigenous populations of the Great Lakes. The mention of the Fort Meigs treaty directly references land taken and used to build the University of Michigan, under the authority of the Catholic church, including a promise that indigenous students would be educated at the future university. In doing so, Devine acknowledges the complicated history of longstanding American institutions while working to educate future generations. 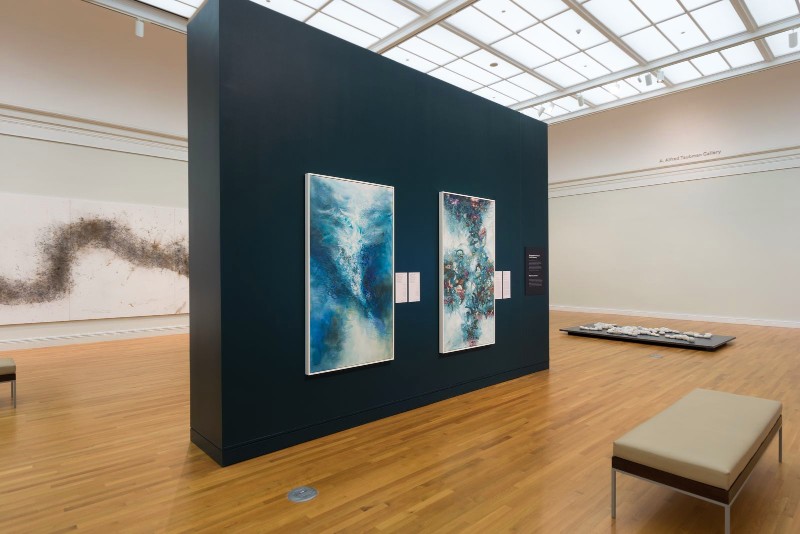 Khaled Al-Saa’i, Map of the Memory and The Dress of the Poem, 2020, acrylic on canvas, courtesy of the artist © Khaled Al-Saa’i, commissioned by the University of Michigan Museum of Art for Watershed. Photo by Charlie Edwards.

​​Khaled Al-Saa’i is a Syrian-born, Dubai-based artist. He also worked for the University of Michigan, teaching calligraphy classes in 2002. Al-Saa’i's two large-scale acrylic paintings were commissioned for the exhibit to “explore his connections to the Great Lakes through Arabic calligraphy, poetry, and collage.” The paintings include calligraphic references and photographs taken from Al-Saa’i's time living in the area. The wall text notes that while his work addresses the Great Lakes region specifically, it also references the Euphrates River, which he swam in as a child. That region in Syria is now experiencing severe drought and water scarcity. For The Dress of the Poem, Al-Saa’i gains inspiration from "Sea and Rain: Lake Michigan" by Ann Arbor poet Keith Taylor—who was initially inspired by James Abbott McNeil Whistler’s painting Sea and Rain (1865), which resides in UMMA’s permanent collection. Taylor’s poem is presented alongside Al-Saa’i's painting in both English and Arabic (and a second panel with an Anishinaabemowin translation). 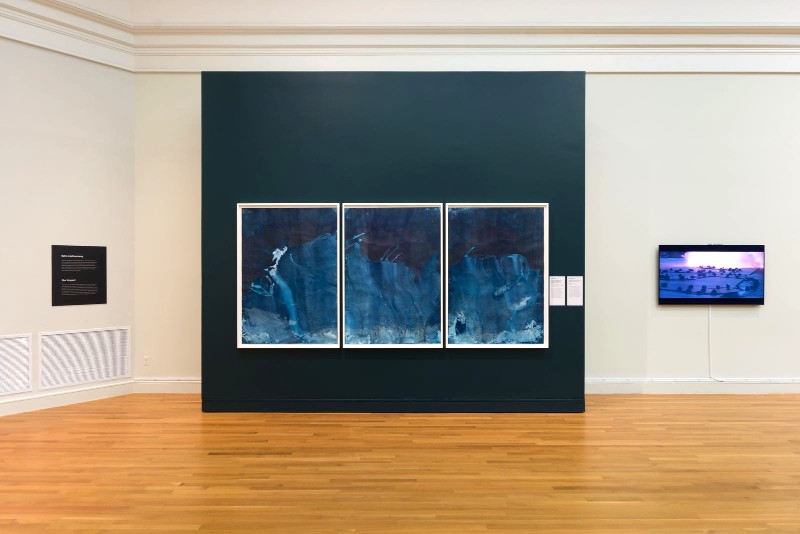 ​​Meghann Riepenhoff is a Washington-based artist working with photographic processes. For her Watershed contribution, Riepenhoff produced three large-scale cyanotype prints, which were “processed in the watershed of Lake Ontario along the Genesee River in Rochester, NY, near the site of the Eastman Kodak Co. production facility.” Kodak’s pollution of the surrounding watersheds near Rochester are interrogated through her choice of processing location and literal use of water as the subject of her prints. As explained in the gallery wall text: “To make her photographs, she hand-coats sheets of paper with UV-sensitive cyanotype emulsion and then places the treated paper in direct contact with polluted water to create an indexical image of its contents.”

Paradoxically, the artist uses a chemical medium of photography to illustrate this environmental crisis, though cyanotype is considered among the least toxic of traditional development methods. 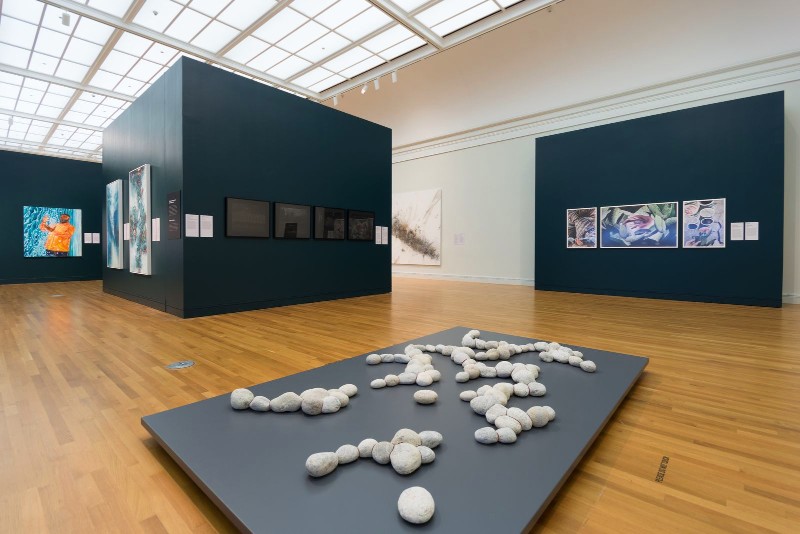 Michael Belmore, Resolve, 2022, stone and copper leaf. Courtesy of the artist © Michael Belmore, commissioned by the University of Michigan Museum of Art for Watershed. Photo by Charlie Edwards.

​​​​Michael Belmore is a multimedia sculptor and Anishinaabe artist. For Watershed, he created Resolve, a sculptural installation that “explores the significance of copper and stone to Anishinaabe culture and connects these ancient materials to our contemporary lived experiences.” The Great Lakes region was once well-known as a source of copper, and it still holds some of the world’s largest deposits. Expanding across a pedestal on the gallery's floor, Resolve is carefully made of stone and copper leaf, the latter crafted to imitate the glow of a fire’s molten embers. 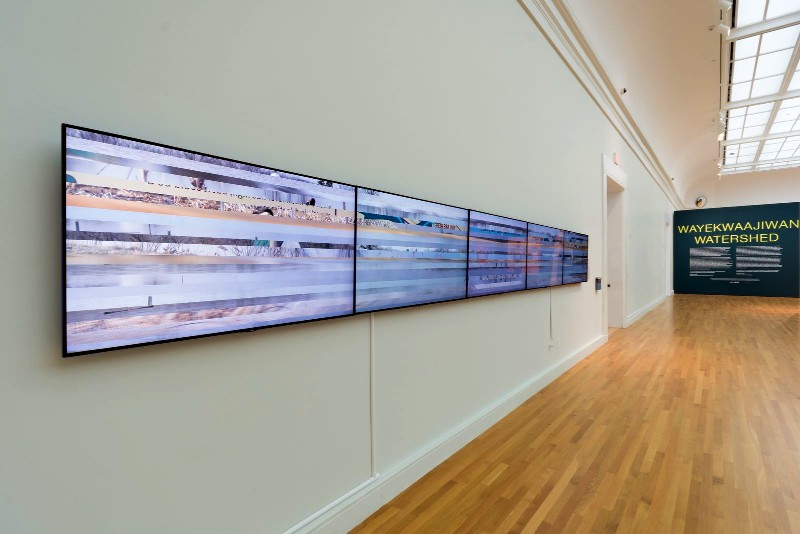 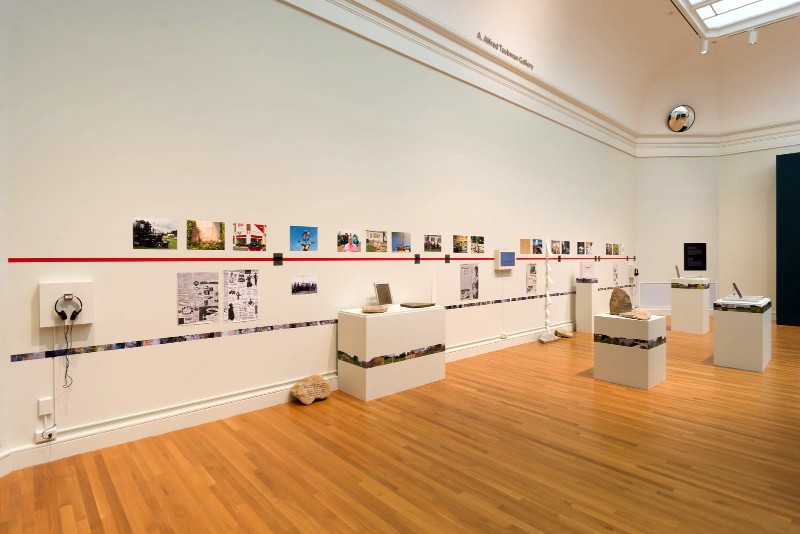 Kate Levy, The Roar on the Other Side of Silence (Along Line 5), 2022, multi-media installation, courtesy of the artist © Kate Levy, commissioned by the University of Michigan Museum of Art for Watershed. Photo by Charlie Edwards.

​​​​Kate Levy is a Detroit-based filmmaker, photographer, and activist who contributes a large-scale installation that “explores the historic and current environmental threat of the Enbridge Line Five oil pipeline to the communities that inhabit the region.” The Roar on the Other Side of Silence (Along Line 5) is a multimedia work engaging with themes of environmental justice. 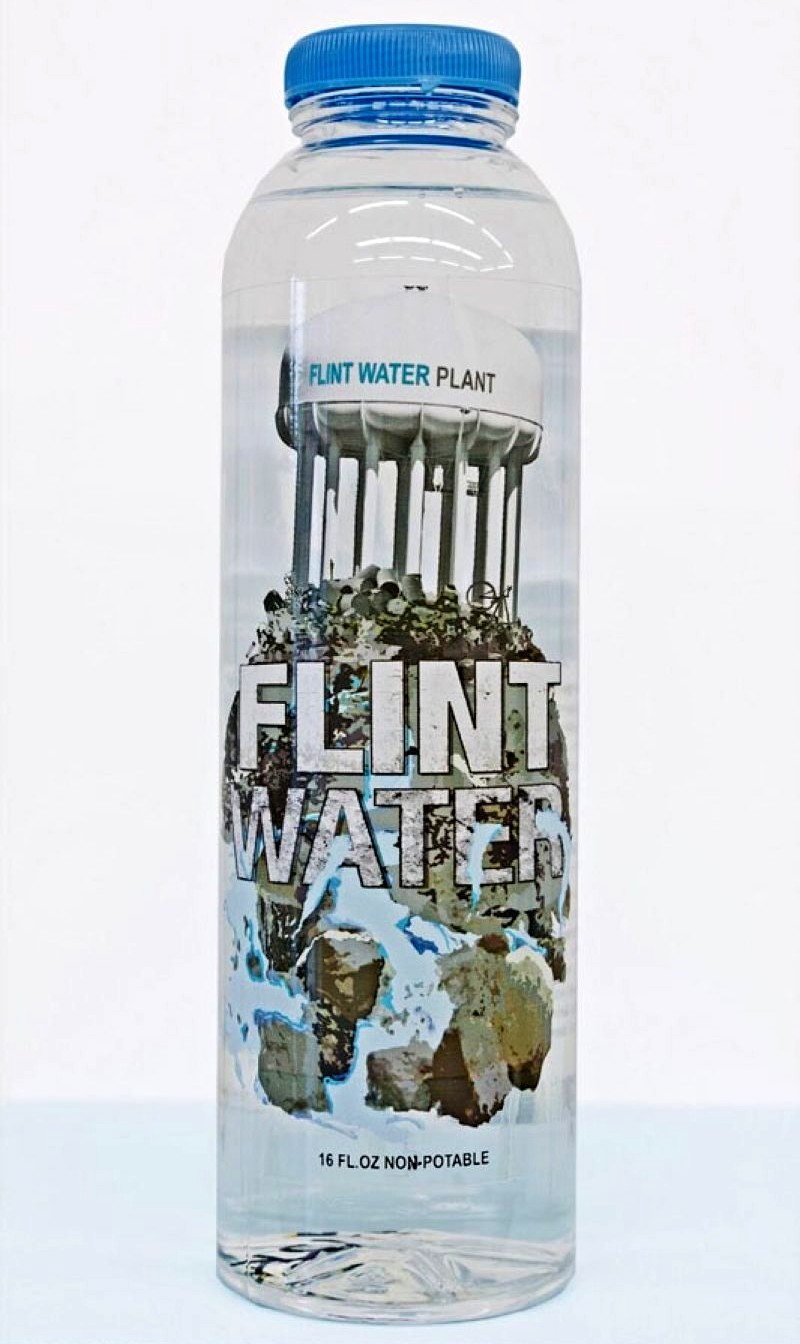 Pope.L’s bottle of Flint water is part of his Flint Water Project installation at UMMA. Photo courtesy of the artist and What Pipeline.

​​​​Pope.L’s installation, Flint Water Project, for example, is a reiteration of a project initially enacted in 2017 at What Pipeline gallery in Detroit. For that show, Pope.L set up a store to sell bottles of water filled with lead and E. coli, taken from the home of Tiantha Williams in Flint. In UMMA's smaller re-imagining of the original exhibit, Pope.L “recasts the people of Flint as agents rather than victims.”

​UMMA's “boutique” version ​​of Pope.L’s installation consists of a room-like corner, wallpapered with a repeated pattern of the Flint Water bottle design. On shelves in front of the wallpaper, bottles of contaminated water are interspersed with framed images from the water crisis: “Sorry we missed you” hangtags that say “Flint Cares,” and a promotional flyer with instructions on how to install a BRITA filter. The bottles' packaging works on several levels to comment on water inequality both in Flint and Detroit. The design could pass for that of a real bottled-water brand, with the bold word FLINT shown with a large water tower above it. As he did at the What Pipeline gallery, Pope.L’s bottles of Flint water can be purchased in UMMA’s shop, with proceeds going to the United Way of Genesee County.

​Watershed offers visitors an extensive and engaging experience, one that is increasingly important as we continue to see water-related injustices. Beyond the physical gallery space, there is an online component, Watershed for Families, to explore the exhibit and the Great Lakes further. The website also offers an interactive and comprehensive map of the exhibit as a downloadable workbook.

​​University of Michigan Museum of Art’s "Watershed" is on display in the A. Alfred Taubman Gallery I through October 23, 2022.